Home » Travel » I Spent the Day at a Water Park During COVID. Heres What It Was Like 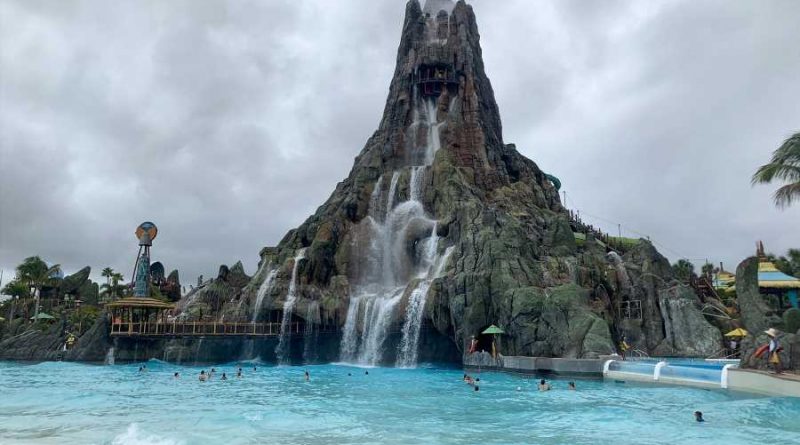 There’s nothing more I’d love than to jet off to a tropical island right now, but until the world (and international travel) returns to normal, I’ll be sticking closer to home. Luckily, I found the next best thing at Universal Orlando’s Volcano Bay water park. My family and I spent a day there during a recent Florida visit and its sandy beaches, South Seas theming, and fruity treats were just the escape we needed. Due to COVID, our “escape” also included masks, social distancing, and lots of hand sanitizer. Here’s what it’s like visiting a water park right now.

Volcano Bay reopened last June along with the rest of Universal Orlando (minus a regular seasonal closure from November 2 through February 27). Like Universal’s land-based parks, Volcano Bay reopened with new health and safety protocols, which came into play before we even entered the park.

After parking in Universal’s main parking garage, we queued up for the buses headed to Volcano Bay. We each had our temperature checked as we passed through security and were given assigned seats on the bus to keep space between groups.

Masks aren’t allowed on any of the attractions or in the wave pool, but we were required to wear masks on the bus, while entering and exiting the park, and in any restaurants or shopping locations. All employees, including lifeguards, wore masks, as well. Mask compliance was comparable to any other place I’ve visited during the pandemic—most people happily followed the rules, but there were always a few people who didn’t put their masks on before ordering a drink at the bar or walking to the restroom.

Signage throughout the park reminded us to keep six feet between ourselves and other guests and to wash our hands often. There were also helpful floor markings anywhere a line might form, like while waiting for slides or at guest services.

We visited on an overcast and cool (by Florida standards, at least) day so it’s hard to say if the crowds were low because of the weather or because Universal is limiting capacity at all of their theme parks right now. There have been days where Volcano Bay reached its limited attendance, but that did not happen on the day we visited.

Even before the pandemic, Volcano Bay was totally prepared for contactless payment and virtual queues with its TapuTapu wearable wristband. All of the rides at Volcano Bay use a virtual line where you tap in at the attraction and your TapuTapu will alert you when it’s your turn to ride. To give you an idea of how dead it was the day we visited, none of the attractions were even using the virtual lines. We never had more than four or five groups ahead of us for any slide we were brave enough to take on.

I already had a credit card set up in the Universal Orlando app so I was able to link that to my TapuTapu for contactless food and merchandise payments throughout the day. A helpful Team Member even told me I can set spending limits for each wristband in case my kids snuck off to order 20 cheeseburgers or something.

Possibly my favorite feature of the TapuTapu is the on-ride photos and automated photo spots set up around the park. With our wristbands on, it automatically linked our photos from the waterslides and there were photo spots around the park where we could tap our band and take a group photo. At the end of the day, we bought the digital package that got us access to all of our photos from the day, but you can buy individual photos, too.

Another add-on we sprung for was the premium seating. For just over $100, we had a reserved spot on the beach with two lounge chairs, a sunshade, a lockbox for valuables, and a dedicated server who took our food and drink orders for the day. To keep things safe and sanitized, our server presented us with a disposable drink menu and a small container with napkins, plastic cutlery, and condiments when we arrived.

Even though I spent about an hour and a half on hold to reserve our spot, the luxury of having a little private space for the day was worth it. I’m extremely understanding of long wait times and other trip-planning hiccups with the state of the world right now. Just be prepared for a wait if you want to reserve premium seating or a cabana because those can only be booked over the phone.

I ordered sushi and a margarita for lunch and I was more than pleased to be at a theme park eating something other than a burger or pizza (but they have those, too). Having food magically show up at our seats was awesome, but even without the premium seating, most of the restaurants offer mobile ordering where you can order and pay for your meal from your phone.

So, what did it feel like being at a water park and maskless for the majority of the day? In as few words as possible, great! Groups were good about staying distant—evidenced by the spaced-out “pods” of people in the wave pool—and people generally seemed to be following the rules.

I’ve visited a few theme parks prior to this outing and with each visit, my discomfort with the world has eased just a bit more. That’s not to say I’m more lax with the rules, but that the rules provide me with some level of comfort for reentering the world. If you haven’t spent much time outside of the house yet, you might not be quite ready to see so many unmasked faces. It’s definitely something that’s going to be different for everybody.

Because I’m already pretty comfortable with traveling—especially outdoor adventures—I had a fun, relaxing day. In fact, I’d have a hard time going back to Universal Orlando and not spending a day at Volcano Bay. I only conquered about half the slides and two drinks off the cocktail menu before the end of the day so I still have a lot of work to do.

You Can Now Learn Hawaiian With Duolingo