If you want to pack in some of the most unforgettable views nature has to offer, you should book a ticket to Iceland immediately. The landscape is spotted with geysers, waterfalls, glaciers, and volcanic landscape. And as if that weren’t enough, during the winter months the Northern Lights take over the sky. Take a look:

Tourists travel from all over to soak in the lagoon and since it’s always around 99 to 102 degrees Fahrenheit, people can swim in it year-round. As a result of the warm water against the cool air, steam rises from the water, creating a truly romantic environment.

One of the most luxurious amenities this natural spa offers? In-water massages (swoon).

During September to March the Northern Lights are a major attraction in the country, because the colorful belts of light can only be seen in a few places in the world. Here’s a look at the Aurora Borealis in north Iceland.

If you’re up for some glacial hiking, you can visit the ice caves. New formations are created each year as the ice freezes, which makes them one-of-a-kind – just make sure you visit during the winter if you want to explore these cold creations in their full glory.

Even better: If you’re really up for an adventure, these caves can offer various high-intense level activities based on what you’re most comfortable with (clearly this person is not afraid of heights!).

The Strokkur is one of the most famous geysers in the country and erupts every 8 to 10 minutes, blasting up 50 to 65 feet – or, at times, even a remarkable 131 feet above the ground.

Not into the snow? Don’t worry, it’s not white all year long. Here’s a road in the Thingvellir region that showcases the rolling grass hills and mountains during the warmer months.

There’s even this beauty called “The Waterfall of the Gods” (or Goðafoss). History has it that in the year 999 a holy man made Christianity the official religion of Iceland. After his conversion, he threw Pagan statues into the waterfall, making it the official symbolic site of conversion.

The highlands features a lava field that was formed after a volcano erupted around the year 1477.

And to top it all off, the cityscapes are adorable and picturesque, too. Here, colorful houses in Reykjavik (the country’s coastal capitol) pop against the snow-capped mountains in the distance.

Why travellers should cash in on overbooked flights 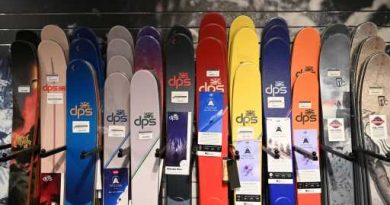 Bentgate Mountaineering in Golden is great for backcountry skiing gear

The most Instagrammable cherry blossom spots