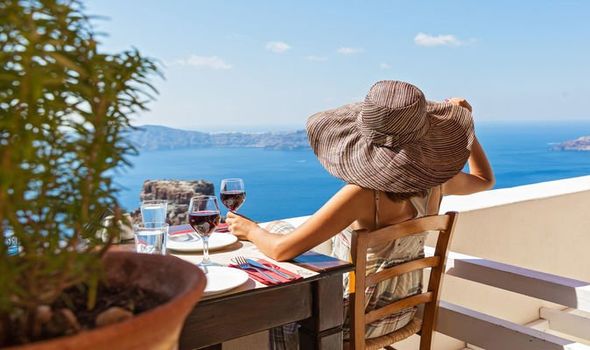 Picture yourself basking in the Grecian sunshine at a five-star resort, lounging by the pool before heading out to explore those waterfront tavernas for a sunset cocktail.

The new 12-night Rhodes Retreat & Greek Isles cruise has everything you could want for a much-deserved break; an all-inclusive, five-star Rhodes holiday, and a cruise to breathtaking locations from Santorini to Naples.

For the first five nights of the holiday you’ll be staying at the five-star, all-inclusive Mitsis Grand Hotel Beach Hotel which offers a state-of-the-art spa, THREE pools, six restaurants, two bars and other perks such as access to concierge and transfer services.

It’s also located within walking distance of Rhodes’ picturesque Old Town where there are plenty of shops and bars as well as landmarks such as the Palace of the Grand Master and the Knights.

From Rhodes, it’s on to a glamorous seven-night sailing on board Princess Cruises’ Regal Princess.

The cruise ship, which boasts the Duchess of Cambridge as its godmother, has heaps of brilliant amenities for passengers to enjoy including adults-only retreat Sanctuary, restaurants ranging from grills to pizzerias, and plenty of Princess classics such as a giant poolside film screen, or the glass-bottomed SeaWalk® walkway to be found on the top deck.

As for the ports of call? Adventurers won’t be disappointed.

The cruise first sails to Santorini, where the whitewashed buildings and blue domed churches make for picture-perfect backdrops, while the waterfront tavernas are a must-visit for a drink with a view.

You’ll then head on to the Bay of Kotor, an old port in Montenegro with attractions such as the artificial island Our Lady of the Rocks that’s built on sunken ships, as well as its buildings’ beautiful architecture.

Messina – hailed as the gateway to Sicily – is next on the itinerary with its beautiful cathedral and delicious food, as well as spectacular views of Mount Etna.

While there’ll be plenty of gourmet dining on offer throughout the cruise thanks to the speciality restaurants, foodies are sure to enjoy the next port of call, Naples. Get ready to sample some of the world’s best pizza, although you may want to leave room on the itinerary for the hike to see Mount Vesuvius first!

The holiday ends in Barcelona, where you’ll disembark and head to the airport for your flights back to the UK.

Want to be on board? Prices start from £1,299pp based on April-October 2022 departures. Find out more and book at imaginecruising.co.uk.