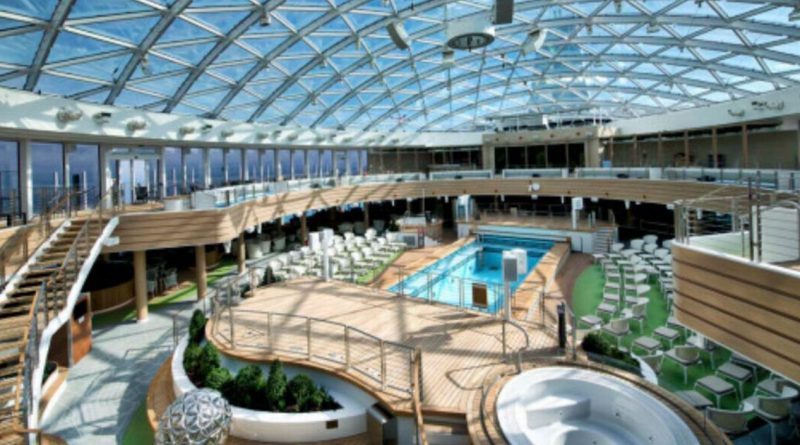 Britain now has a brand new billion-dollar cruise ship which promises to be the greenest yet – and it has a wine bar with tapas, SkyDome and two infinity pools.

P&O Cruises has launched Iona which took its maiden cruise through the Scottish islands this year for celebratory fireworks.

Named after the Isle of Iona the ship, which can carry 5,000 people, sails past rugged Scottish scenery in the Western Isles.

The focal point of the Iona is The Glass House – a light and airy atrium with a wine bar and tapas menu.

Based at the top of the ship, the two-deck SkyDome is covered with an enormous glass roof so that you don’t need to get wet when it rains and the sun shines in on the indoor pool.

Outside, there are sun loungers, two infinity pools and a top-deck lido plus a huge 18 hot tubs for total relaxation.

At the stern of the ship, the Sunset Bar is the perfect spot to watch the sky change colour as the sun goes down.

The Iona, which cost £700million, is huge and guests can indulge in 30 bars and restaurants, a four screen cinema and even a gin distillery.

Each deck and zone has different furnishings, style and facilities so you never get bored on board.

There’s also a two-storey theatre with live acts including Tony Hadley (of Spandau Ballet) and Gary Barlow (from Take That) who is also the music director of the on-board 710 Club.

And, when it comes to the food travellers can experience menus designed by Marco Pierre White and afternoon tea created by pastry chef Eric Lanyard.

On the foodie front there are four main dining rooms where food is included in the cost of the room plus speciality restaurants where you pay a la carte.

These include Sindhu which offers Indian food, Epicurean, which creates fine dining options including a six-course Norweigan tasting menu inspired by the ship’s summer destination and Olice Grove which features a Mediterranean menu.

If you’re all about seafood then check out The Beach House which produces delicious dishes based of Latin American and Caribbean food.

Plus, there are small dishes made by Spanish chef Jose Pizarro for when the Iona heads to Spain, Portugal and the Canary Islands.

The Iona is owned by an American corporation and was built in Germany, but it’s designed to cater for British passengers from the giant Union Flag on the bow to the Sussex beer in the pub.

Plus there are UK plug sockets, kettles and tea in the cabins.

The Iona’s home port will be Southampton and all guests can enjoy a new musical called Festival and an aerial show in the SkyDome.

Plus, there’s even a drag show in The Limelight Club!

Cruises start from just over £50 per person per night in an inside room meaning that the expensive cruise ship is great value for money.

You can take several pieces of luggage and there are 1,486 balcony rooms, 95 mini-suites with a conservatory, bedroom and veranda.

Currently, Covid rules mean that you need pre-boarding tests, social distancing is required in public areas and masks worn everywhere inside except when eating and outside when you cannot social distance.

A 7-night trip around the UK in August on the Iona starts from £499 per person while a 14-night cruise to Spain and Portugal will set you back from £699 per person.

And for more stories from the Daily Star, sign up to one of our newsletters here.