Home » Travel » Inside Tunisia's ghost hotels: The once lavish resorts deserted and abandoned after terror attacks on tourists

Ranging from perfectly preserved to in ruins these resorts in Tunisia, that were abandoned after terrorist attacks in 2015, are a clash between ‘post-apocalyptic’ and forgotten elegance.

Still laid out in all their grandeur, the hotel’s white lobbies and dining halls remain laden with chairs, tables and couches that were once used by thousands of guests.

The decline in tourism in Tunisia came after a spate of terror attacks in 2015, where 71 people were killed in multiple incidents.

The worst of that year occurred on June 26, when 38 foreign tourists, including 30 British nationals, were killed in an attack on Port El Kantaoui near Sousse – many of the hotels have stood empty since.

Stunning chandeliers hang from the ceilings and facilities, from a fully-equipped bar to massage tables and spa rooms, remain intact apart from a heavy coating of dust.

Outside, the magnificent Moorish-design courtyards remain impressive yet overgrown in their abandonment, with green pond-like liquid lying in the pools, Jacuzzis and water features.

Urban explorer Bob Thissen, from Heerlen, The Netherlands, visited the sites after the country was declared a no-fly zone, and where some of the hotels closed as early as 2008. A state of emergency was first declared in Tunisia three years ago.

Advice from the UK Government states: ‘Terrorists are very likely to try to carry out attacks in Tunisia’, listing eight extremist activities.

Bob said: ‘It was crazy to walk alone in such big resorts where thousands of tourists used to spend their holidays. It was so silent.

‘It’s like a lost paradise. The pools have dirty green water, are half filled with sand and vegetation, or just the salt is left inside the saltwater pools.

‘The normally perfect swept paths are now full of sand and covered with dead palm leaves.

‘The outdoor animation buildings are falling apart, bars are empty, and the playground equipment appears lonely.

‘All resorts were completely different, from perfect condition to completely ruined. I liked the post-apocalyptic exteriors with the pools the most.

‘It’s crazy that these sized resorts are abandoned. Most resorts have multiple outdoor and indoor pools.

‘It was a big contrast to see these abandoned decaying hotels against the beautiful blue water beaches.’

The decline in tourism in Tunisia followed a spate of terror attacks in 2015, where 71 people were killed in three incidents.

The worst of that year occurred in June, when 38 foreign tourists, including 30 British nationals, were gunned down on the beach during an attack on Port El Kantaoui.

Eyewitnesses said the gunman, later named as Seifeddine Rezgui, was was seen laughing and joking among the midday bathers and sunseekers, looking like any other tourist.

But it was claimed he was carefully selecting the victims he would murder with a Kalashnikov hidden in his parasol.

The British were his prime targets on the crowded Tunisian beachfront at El Kantaoui near Sousse. But Germans, Belgians and Tunisians were also among his 38 victims – with 36 seriously wounded.

‘He was laughing and joking around, like a normal guy,’ said one witness. ‘He was choosing who to shoot. Some people, he was saying to them ‘you go away’. He was choosing tourists, British, French.’

After the horrifying attack tour companies evacuated thousands of tourists, while Thompson and First Choice both cancelled all flights to Tunisia which had been booked for for week.

Tunisian Prime Minister Habib Essid said: ‘The majority are British. After come the Germans, then the Belgians and then other nationalities.’

Bob and his group of ‘urbexers’ documented the locations for their channel ‘Exploring the Unbeaten Path’.

He said: ‘I think the area around Sousse was affected more by the decline than in Djerba.

‘I think Djerba already had a hard time in the tourism industry, many hotels were already abandoned before 2015, but after the terrorist attacks it became even worse.

‘I think it’s not only abandoned due the attacks but made even worse because of the media and government.

‘In Western Europe there have been many terrorist attacks and those countries remain ‘safe’ for tourists to visit.

‘After the two terrorist attacks Tunisia was turned into a no-go zone, many airlines didn’t fly to Tunisia anymore until recently and it had a huge impact on the tourism industry.

‘You can only imagine how many people must have been fired in these giant resorts.’

Both Thomas Cook and TUI have relaunched and increased flights and holidays to Tunisia this year.

The number of British tourists visiting the country is expected to reach 75,000 – a figure that is one sixth of the numbers prior to the massacres.

Bob said: ‘Since this year Western companies like TUI fly again to Tunisia and you can see the tourism industry slowly begins to rise from the death.

‘Quite a few hotels we drove by are in renovation, preparing for the returning tourism, which was good to see.’ 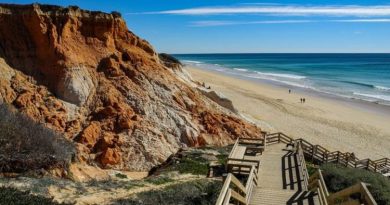