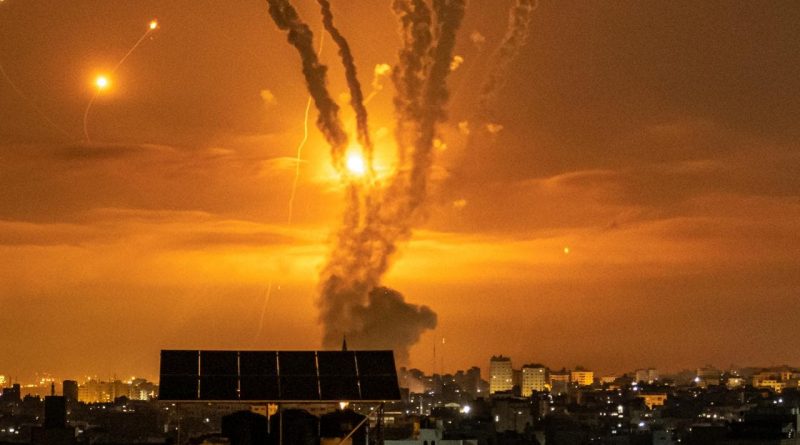 As the conflict between Israel and Palestine continues to escalate international airlines have cancelled flights to the state of Israel amid rising panic over the violence.

On Thursday night, dozens of rockets were fired from Gaza towards the southern Israeli coastal cities of Ashdod and Ashkelon, in the vicinity of Tel Aviv’s Ben Gurion airport.

US airline United, which operates 18 weekly flights to Israel, announced it was suspending its operations.

Delta and American Airlines also confirmed they would suspend services between New York and Tel Aviv.

LOT’s spokesman Krzysztof Moczulski said in a statement to AFP, “I suppose that we will not be flying there in the coming days”.

It comes as Israel bombarded Gaza with artillery and air strikes on Friday in response to a new barrage of rocket fire from Hamas.

At least 103 people have been killed since Monday, including 27 children, and more than 580 wounded, the health ministry in Gaza said.

Inside Israel, seven people have been killed since Monday, including one six-year-old, after a rocket struck a family home.

But the Israel Defence Force stopped short of a ground offensive in the conflict that has now claimed more than 100 Palestinian lives.

As the violence intensified, Israel said in a tweet it was carrying out an attack “in the Gaza Strip” although it later clarified there were no boots on the ground.

Israeli security forces have also been scrambled to the border to contain deadly riots in the streets, and projectiles have been fired on Israel from Lebanon.

The United Nations said the Security Council would meet on Sunday to address the conflict, while the US Secretary of State Antony Blinken said Washington was “deeply concerned about the violence in the streets of Israel”.

Rubble of a residential building destroyed by an Israeli air strike on May 13. Picture: Fatima Shbair/Getty ImagesSource:Getty Images

The Israeli army clarified early Friday that its troops had not entered the Gaza Strip as it had earlier stated, blaming an “internal communication” problem for the confusion.

Balls of flames rose high into the sky after strikes smashed into densely packed Gaza.

John Conricus, an Israeli army spokesman, said the country was “prepared, and (would) continue to prepare for various scenarios”, describing a ground offensive as “one scenario”.

In Gaza, AFP photographers said people were evacuating their homes in the northeastern part of the enclave ahead of possible Israeli attacks, with Hamas, the Islamist group that controls Gaza, warning of a “heavy response” to a possible ground incursion.

With the conflict showing no signs of easing, Israel has been rocked by an unprecedented wave of mob violence, in which both Arabs and Jews have been savagely beaten and police stations attacked.

The heavy bombardments coincided with the start of Eid al-Fitr, which marks the end of the Muslim holy fasting month of Ramadan, and saw the faithful pray at mosques and amid the rubble of Gaza’s collapsed buildings.

Inside Florida private island for only $70 a night | Photos

The Best Ways to Disinfect Your Hotel Room During the Pandemic, According to Health Experts