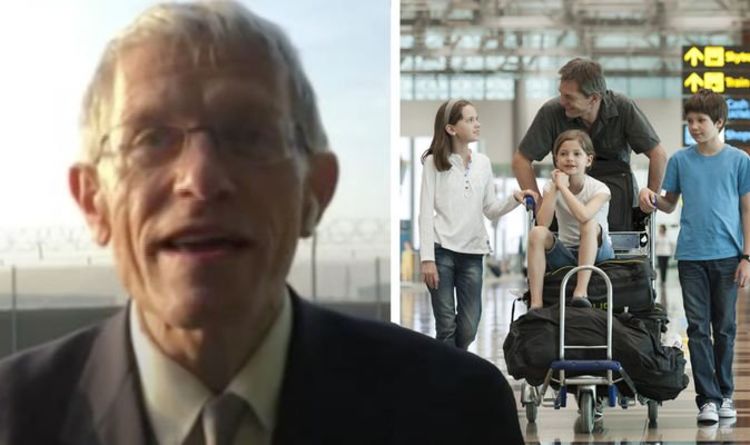 Simon Calder appeared on Sky News on Monday morning and explained to Kay Burley the reason behind the long queue scenes at various airports over the weekend. The travel expert warned those with children under the age of 12 to expect longer times at border control due to children being unable to use the e-gate system.

Kay asked Simon: “Why on earth is this happening?”

He replied: “It’s actually, Kay, not very much to do with the fact you’ve got these tight regulations.

“As you know the UK has absolutely the toughest rules of any country in Europe for coming in; you’ve got to have a test before you fly, you’ve then got to book a PCR test after you arrive and on top of that, you then need to fill in a passenger locator form.

“But, crucially, all of this, is out sourced, it’s basically down to the airline the country that you’re flying into the UK from, so all they need to do is check your identity when you get to the UK,” he continued.

“However, what we saw over the weekend was here at Heathrow, an awful lot of families coming into the country and of course, the end of the summer holidays and many of them returning and that’s why we saw these extreme scenes of very long queues, four to five hours, pregnant women fainting, all kinds of medical emergencies.

“If you were stuck there, it was awful, if you weren’t you may well be thinking ‘I certainly don’t want to take a holiday’.

“But it seems to be simply lots of under 12’s, they can’t use the e-gate, as a result of that everything started snarling up and basically, the border force, for the first time, said these queues were unacceptable,” Simon added.

Kay wondered: “Indeed so. And I suppose, the big question for my viewers this morning Simon, when’s this going to get better?

“And if they’re going away this weekend or next weekend, will they still have the same problems when they come back?”

“Last night, for instance, there were flights coming in from Terminal five, just over here at a rate of eight per hour from holiday destinations.

“Purely places like Mykonos and Santorini in Greece, Malaga and Palma Ibiza in Spain.

“That represented about 1200-1500 people every hour, that is not going to be repeated probably now until half term at the end of October.

“So, if you are flying in, the particularly if you don’t have any annoying under-12 children with you, you’ll breeze through the e-gates, I predict,” he revealed.

“But clearly, Heathrow, absolutely furious as the way it’s passengers have been treated and, of course, the airlines hate it as well, partly because they get the blame even thought it’s absolutely nothing to do with them and partly because it disincentives, still further, people wanted to travel abroad.”

What are the rules for those returning from a green list country?

Arrivals from green list countries need to take a pre-departure test as well as a PCR test on or before day two of their arrival back into the UK.

They do not need to quarantine on return unless a positive test result is given.

And no additional tests need to be taken if a negative test retails is given.

The Government is reviewing the traffic-light system every three weeks.

TUI: Britons to receive refunds by end of the month for holidays cancelled by coronavirus

How to explore the world from the comfort of your home