Wedgwood blue skies, silver-leafed olive trees and the Med glistening in the low winter light… while travel remains so tricky, let novelist CAROL DRINKWATER transport you to the Cote d’Azur in this festive evocation

To say I love the Christmas season at our home in the South of France is an understatement. I get such a kick out of preparing the house for the arrival of family; seeing our scruffy old villa bursting at the seams with loved ones.

Christmas in the Caribbean, after a tiring flight, may sweep you out of the cold but it’s not a real Christmas, is it?

I have tried roast turkey beneath a baking sun but it’s nothing compared with the French Riviera, which offers winter delights at a dulcet pace. 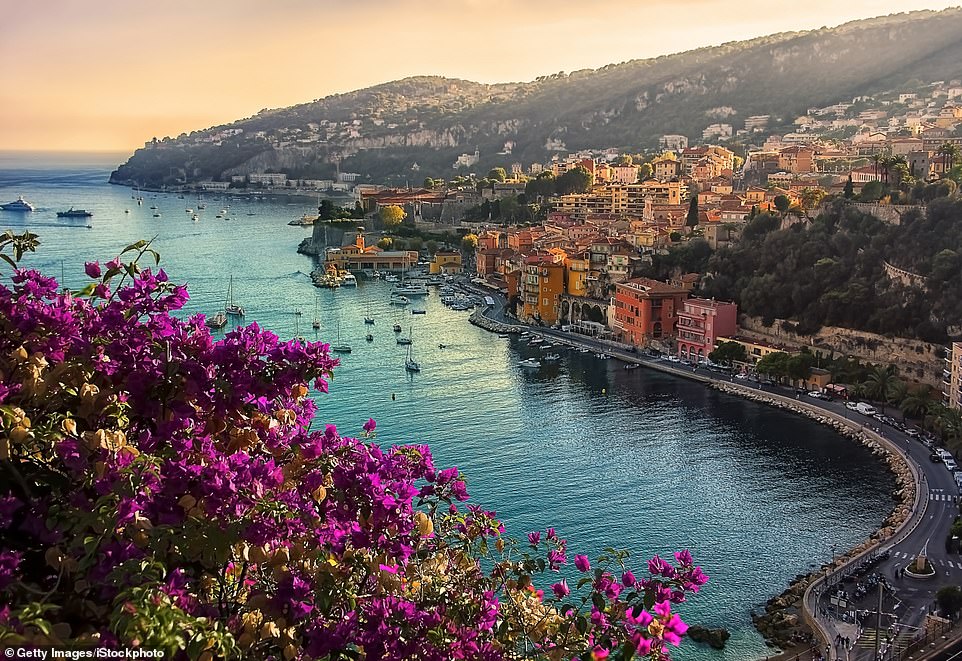 Captivating: Villefranche on the French Riviera near where Carol has a home

From early December through January, the weather is usually sunny along the coast where we live, overlooking the Bay of Cannes.

Temperatures are gentle. We eat our lunches outdoors while the Mediterranean glistens silver in the low winter light and, once the sun has begun to set and dusk is falling, we pile back indoors to watch films by a log fire.

In any other year, we’d be gathering up our daughters and grandchildren and zipping down to Cannes on Boxing Day to sip hot chocolate at one of the beach cafés crowded with glamorous Italians — the border is not far away — wrapped in their long mink coats, devouring slices of delicious panettone and clinking flutes of champagne.

If we are really lucky and it is a warm afternoon, we might catch sight of a pod of dolphins frolicking in the bay, waters that in summer are crowded with tourists. But for months of this year, during two long lockdowns, we have not been allowed to venture farther than a half-mile or so from home, and even then only if carrying an attestation (certificate) stating a bona fide reason why we should be out of doors. Although we could see the sea from the terraces around the villa, frustratingly we could not walk its shores. 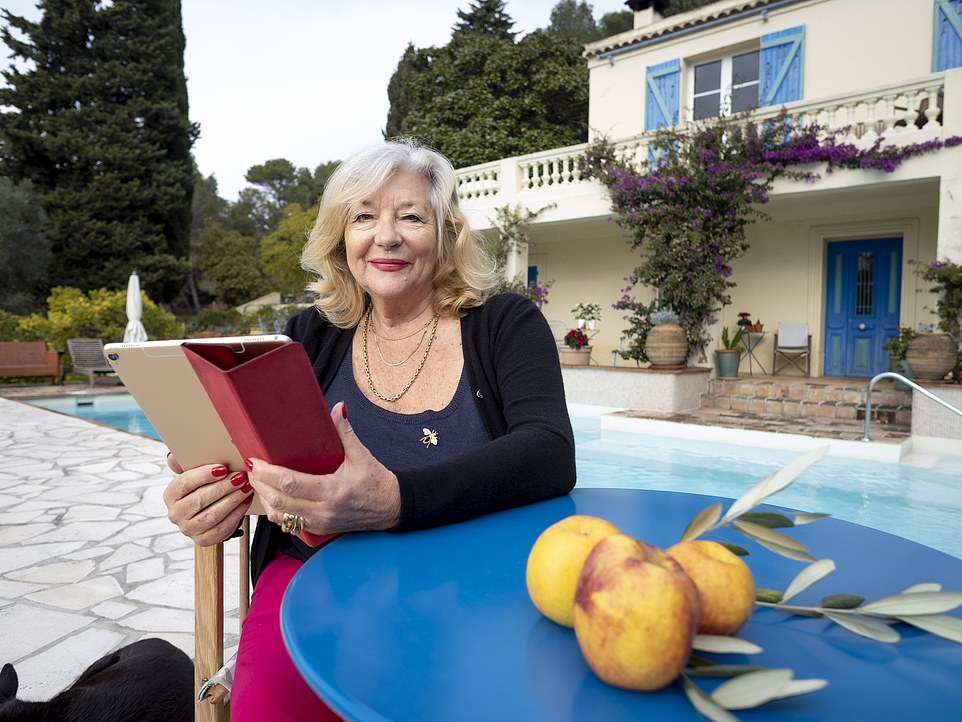 Carol says: ‘Christmas in the Caribbean, after a tiring flight, may sweep you out of the cold but it’s not a real Christmas, is it? I have tried roast turkey beneath a baking sun but it’s nothing compared with the French Riviera’

FRANCE AND THE COVID RULES

It’s a fluid situation. Currently, only French citizens and residents are permitted to enter France and need to present a negative PCR test result, carried out less than 72 hours before departure. This will be in place until at least January 6 due to the new strain of coronavirus found in the UK. France is not on the UK’s travel corridors list so British travellers would have to quarantine for up to ten days on their return if, and when, France reopens its borders to tourists.

Now, the restrictions are easing. Masks are still obligatory and all bars, cafés and restaurants must remain closed until late January. But as long as we keep a respectful two-metre distance from others, we can move about more freely.

Even so, we are not with our loved ones this year. Families can, within reason, spend the Christmas holidays together but we have chosen to spend them alone, just the two of us.

In mid-December, when we made a swift trip to Paris for my husband Michel’s work commitments (he is a film producer), I took the opportunity to pop into Le Bon Marché, on the Left Bank. Along with Bloomingdale’s in New York, it is my favourite department store.

Whatever you desire, they will find for you and the food halls are . . . well, I gain pounds just strolling the aisles.

As it’s not cheap, shopping there is only for treats and presents. This year I ordered a silver birch tree adorned with LED lights for one of my step-daughters, who lives in Bordeaux. If I shut my eyes I can picture her with her two gorgeous daughters laying presents under it. The prospect of not being with them stings.

At the weekend, we left Paris and headed home, setting off before dawn to avoid the traffic, while the stars were still bright. After a year of extended lockdowns, stricter than those in the UK, many Parisians are heading for the lightsome South, grateful to be getting out of the urban sprawl even for a brief spell.

If it weren’t 2020, our car would have been laden with gifts for the soon-to-be- arriving crowds of family and friends. But not this year, sadly.

Speeding out of the darkness of northern France, we flew by the stark vineyards of Burgundy and Beaune, passed through Lyons around breakfast time, and had hit Provence by late morning.

The sudden change of climate and landscape never ceases to delight me. Wedgwood blue skies, silver-leafed olive trees, Les Alpilles mountain range, purple and proud, then our first sighting of the Mediterranean, as flat and shiny as a polished sixpence.

This year, instead of heading straight to the villa, we decided to turn off the motorway, eased our pace to embrace the leisurely rhythms of Le Midi, and tumbled down secondary roads to the water’s edge. 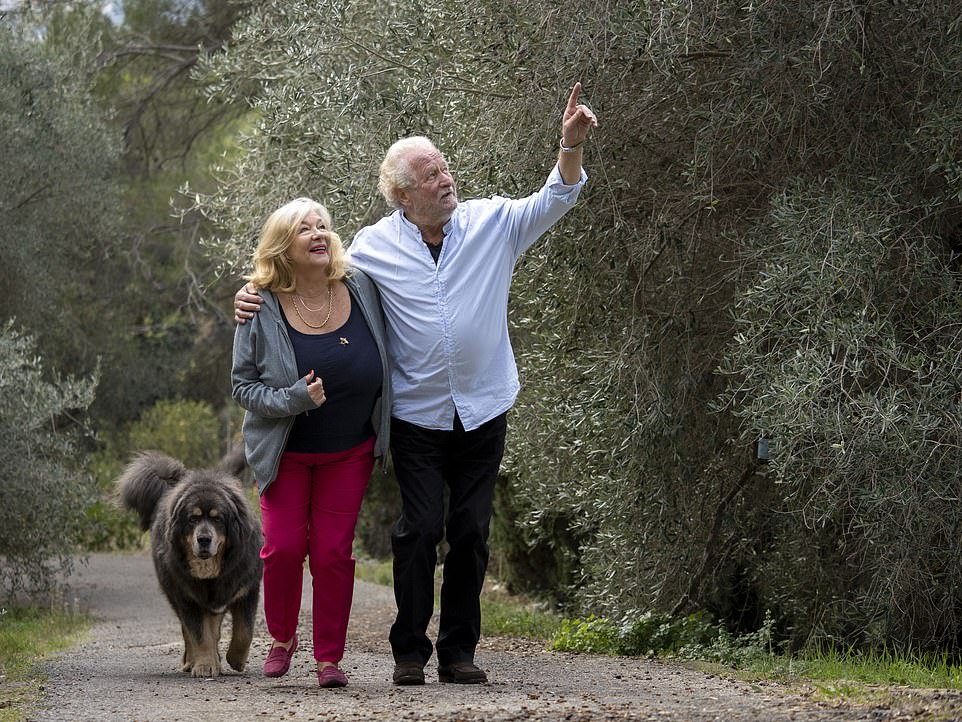 Seasonal stroll: Carol and film-producer husband Michel, whom she is looked forward to spending a cosy New Year’s Eve with 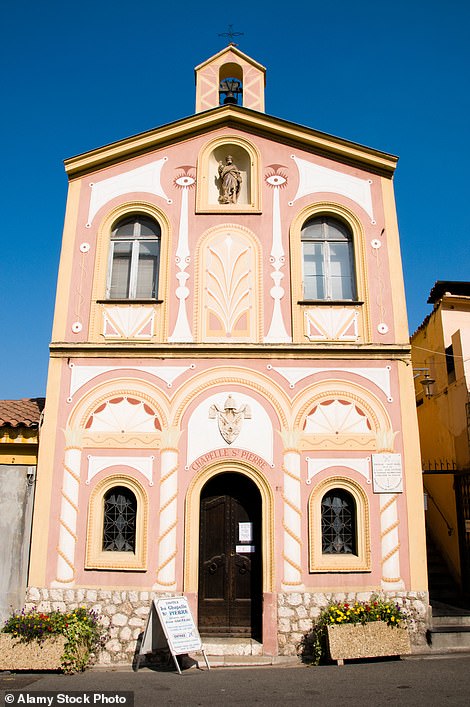 It was lunchtime. We made for a favourite spot along the craggy coastal stretch that snakes from Marseilles to Cannes, to the fishing village of Cassis, at the heart of the Calanques National Park.

There we popped into an épicerie, bought two freshly baked demi-baguettes and settled on a bench down at the port, enjoying them with a shared quarter-bottle of chilled champagne; a sip or two each to welcome Christmas.

After lunch, we took a brisk walk. If you have never been to this region — and you must come when allowed — it is a gem, made up of caves, limestone cliffs and steep inlets grown over with wild pines and sweet-smelling shrubs.

Traditionally, from early December to the first week of January, there is a Christmas market in Cannes along the Allées de la Liberté, and because it is outdoors, it has gone ahead this year.

Usually people stroll about in the Riviera sunshine, cradling tumblers of vin chaud — warm spicy wine — on the lookout for vintage gift pieces. There were certainly fewer tourists but the mood was upbeat.

One day, we drove 20 minutes along the coast to Villefranche, where you’ll find the fabulous Chapelle Saint Pierre, dedicated to Saint Peter, patron saint of fishermen — this was once an active fishing port. Its interior was painted by Jean Cocteau.

In normal times, we would enjoy an aperitif outside a cafe but as the bars are closed, it’s a stroll by the superyachts.

Two hours later we were back at the Olive Farm and our preparations began in earnest. There was a tree waiting to be dressed, so out came the santons (little saints) — hand-made terracotta figurines.

These have a fascinating history. After the French Revolution, the government closed all the churches and banned Nativity scenes.

In 1797, a Marseilles artist, Jean-Louis Lagnel, started to mould and hand-paint clay figures up to 6 in (15 cm) high. Each depicted a Provençal character: bakers, shepherds, woodcutters, washerwomen.

Lagnel placed them at the foot of his hand-made crib, and his Nativity scenes were such a hit that eventually every home had one. It was a way to worship in secret.

Our old house creaked emptily but the dogs still snored by the open fire as I placed presents at the foot of the tree: a few books and plenty of DVDs to screen over New Year.

Then I turned my thoughts to menus. The French take their festive platters seriously and spend lavishly on them. Christmas Eve, rather than Christmas Day, is when they tuck into the big family meal known as Le Gros Souper or Le Réveillon. Traditionally, it was served after the return from midnight Mass. 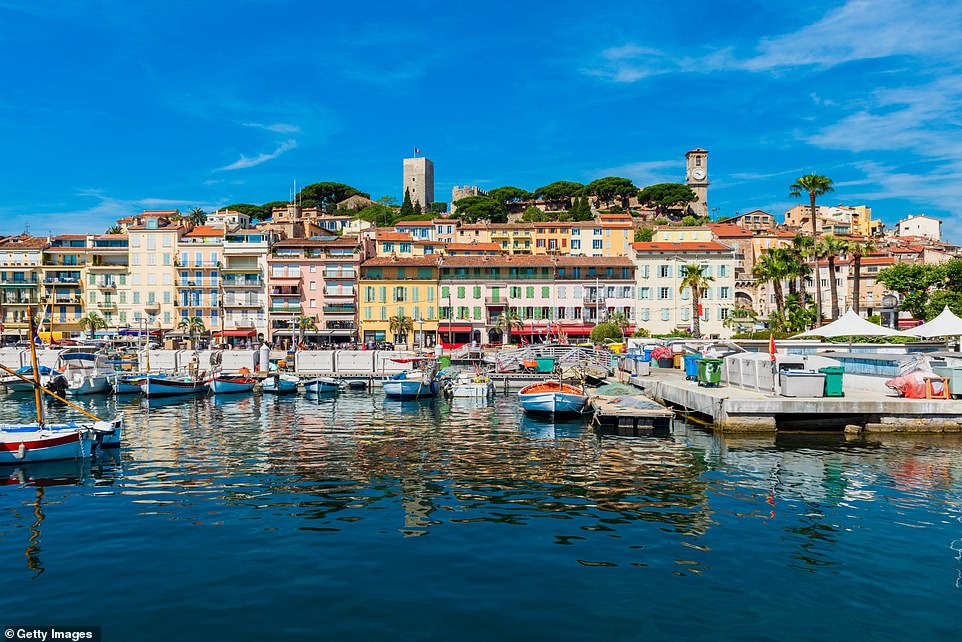 From early December to the first week of January there is a Christmas market in Cannes, pictured, along the Allées de la Liberté, reveals Carol 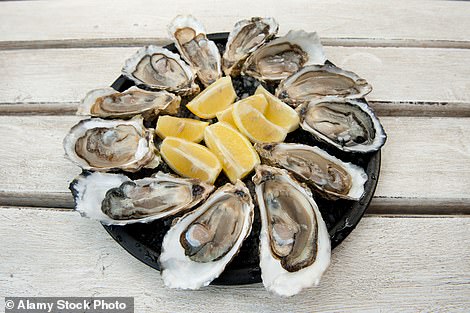 Oysters, says Carol, are ‘cheap as chips’ in the Cote d’Azur

In the South, these spreads consist of seven courses and include caviar, blinis, smoked salmon and lobster as the principal plate. Crab or oursins (sea urchins) might also make an appearance.

This is then followed by 13 sumptuous desserts, because 13 was the number of people at the Last Supper.

Our Christmas Eve repast was more modest. Instead of 11 at our long oak table, there was just Michel and me.

Our first course was oysters, which are cheap as chips here. Michel shucks them in the garden. I kept a brazier blazing through the evening, fired with logs from fallen trees, and played Christmas music. My late mum’s favourite was White Christmas, so in memory of Phyllis, Bing Crosby crooned.

On the upper terrace, overlooking the sea — lit with a triangle of lemon moonlight — we toasted absent loved ones with champagne in Georgian crystal glasses, given by my late father.

Christmas Day itself began with coffee and presents — then we set to work in the pine-scented fresh air, pruning the olive trees. Then we built a roaring bonfire under a tender blue sky.

Another Christmas task is decanting our newly pressed olive oil.

Our steel canisters, which have spent six weeks in a cool, dark corner since November’s harvest, will be transferred to a garden table at which, in other years, my stepdaughters would help me bottle the peppery oil. Guests always leave here with several litres for their kitchens.

Soon, New Year’s Eve will be upon us. Again it will be just the two of us, so no foie gras and sweet white wine, but we’ll have oysters again, followed by a small baked salmon.

Down in the Bay of Cannes, we can expect fireworks and music, a display organised by the local firefighters.

Will it be cancelled? Please, let’s see this dark year off in a blaze of colour.

We will settle on our wooden deck in the pine forest behind the villa and at midnight every boat in the harbour will toot its horn, and from every house on every hill, people will be cheering ‘Bonne Année! Happy New Year!’

Brexit: How exactly will holidays be affected after Brexit? ABTA updates travel advice

7 easy ways to save money on a cruise vacation

Eight in 10 Ryanair passengers are waiting for refunds, says Which? 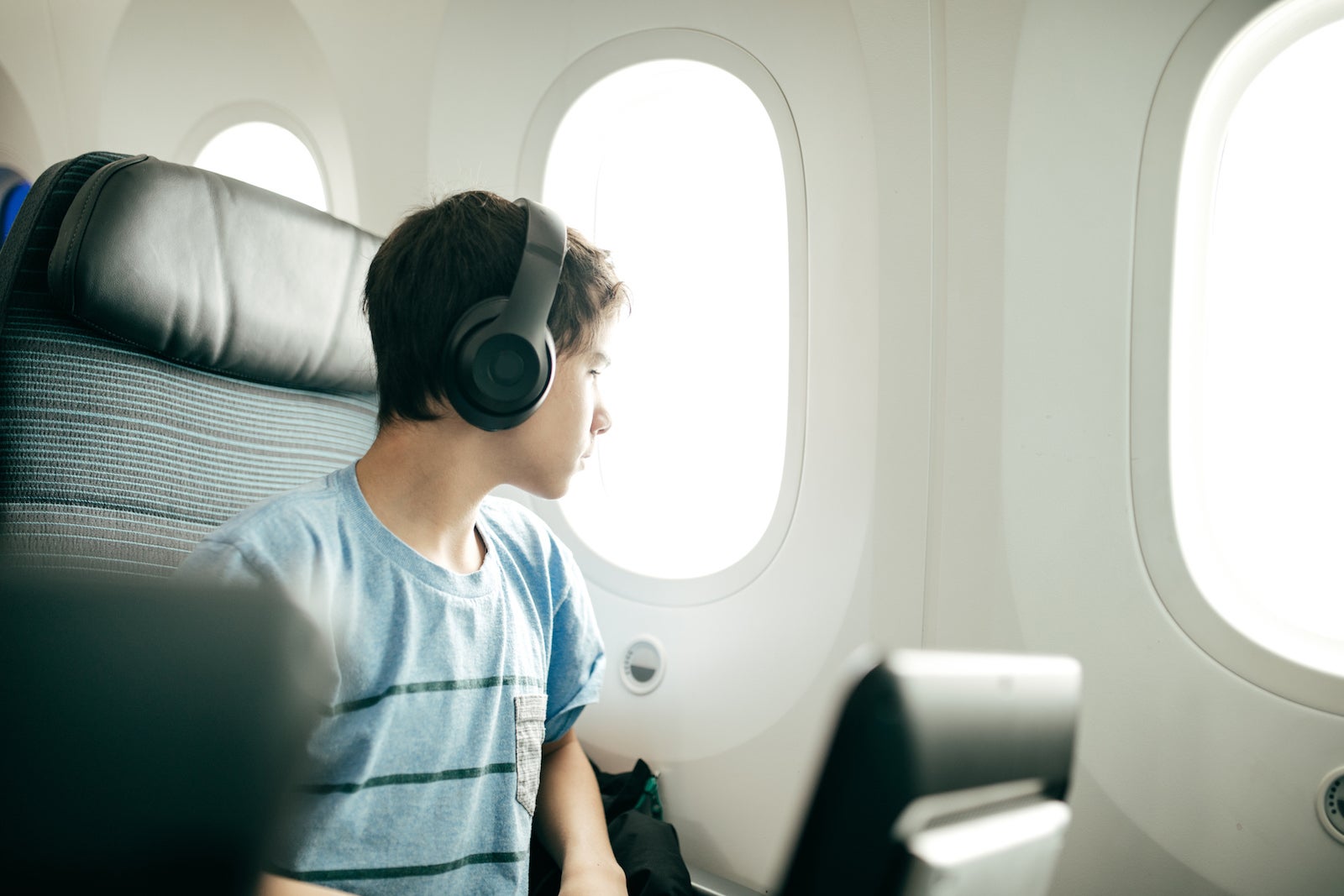