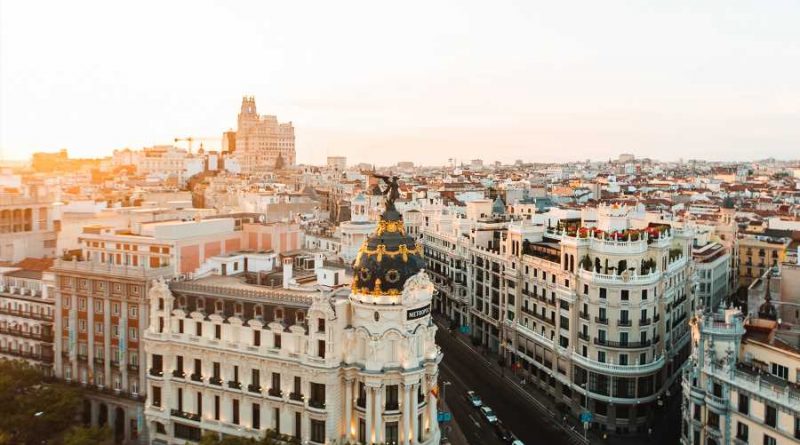 There’s far more to Madrid than bullfighting, flamenco, and tapas, though you’ll certainly find all three in the Spanish capital. Barcelona often steals the spotlight, but it’s in Madrid where you’ll find the Golden Triangle of Art, the world’s oldest restaurant, and the flamenco club of your Spanish dreams.

Madrid is a city with a rich history, gorgeous architecture, world-class shopping, and a vibrant nightlife. It’s a European capital filled with fine art, excellent wine, delicious tapas, and the kinds of impromptu street performances memories are made of.

Looking to revamp your wardrobe? Madrid is filled with designer boutiques, mainstream retailers, and one-of-a-kind shops. And there are plenty of cafes for breaks along the way.

Madrid is a college town that’s home to not one but two world famous football clubs — Real Madrid and Atletico Madrid. It is the world capital of bullfighting, which takes place from March through October. And while it doesn’t boast beaches like Barcelona, Madrid offers plenty to do.

Madrid offers so much to do that you may want to embrace the concept of siesta. The city’s bars and clubs tend to hit their stride after midnight. An afternoon nap may be just the fuel you need to transition from a day of sightseeing to a night of music and dance.

Madrid is a city that literally sizzles during the summer with temperatures that can soar above 100° F. It’s worth it to brave the heat for Madrid’s take on Pride, which starts each year in late June and runs through early July. What used to be a small celebration in the late 1970s has since grown into one of the largest celebrationbsn of LGBTQ pride in Europe. For better weather, lighter crowds, and cheaper prices, try visiting during the fall or spring when temperatures are more pleasant. The days are sunny, and you’ll be able to celebrate events like the San Isidro Festival, held each year in May.

Madrid is an inland city that’s been the Spanish capital since the 17th century. English isn’t as widely spoken in Madrid as it is in Barcelona, making it an ideal place to dust off your Spanish in restaurants, cafes, and shops. You might want to plan for a mid-morning snack as you’re exploring, however. Lunch and dinner are typically eaten late in Madrid, where siestas really do break up the day.

How to Get Around

Trains: Madrid is a city with an excellent metro system that extends from Madrid-Barajas Airport, through downtown and to the suburbs. Fares are based on a zone system with prices determined by the distance traveled. The cheapest fares are around 1.50 Euro. If you’ll be in town for a few days, consider purchasing a flat rate metro card to cover the length of your stay.

Buses: For anywhere Madrid’s dozen or so metro and light rail lines can’t take you, the city operates a fleet of more than 2,000 buses. Those buses run over 200 routes and serve more than 10,000 stops.

Taxis: Taxis are typically white with a diagonal red band on their front doors and roof signs. They can be found at taxi stands throughout Madrid, hailed by raising an arm, or called through several apps. Remember, fluent English-speaking cabbies may be fewer and farther between in Madrid than they would find in Barcelona.

Ride service: Uber is available in Madrid. Traditional cabs also are available via Uber in Madrid.

The Four Seasons Madrid combines seven historic buildings to create a new luxury property in the heart of Madrid. The hotel is the Four Seasons brand’s first in Spain and sits just steps away from luxury shopping along the famous Gran Via. The property includes a rooftop terrace and pool as well as a four-level spa.

This intimate boutique hotel boasts just 76 rooms, but its rooftop terrace offers some of the best views in the city. The five-star property is located along the Gran Via, just steps from some of Madrid’s best shopping, and is home to a two-Michelin star chef.

The Axel Hotel is located in Madrid’s famous Barrio de las Letras, a bohemian literary quarter known for its shopping, dining and fun. This intimate property has just 88 rooms and is a favorite of gay travelers. The rooms are fun and whimsical, and the rooftop includes a pool with sweeping city views.

This centrally located hotel isn’t just good for your wallet, it’s good for the environment. This hotel combines whimsical design with the perfect location to create an affordable gem within walking distance of some of the best art in Europe. The hotel aims to be carbon neutral and offers a coworking space made for digital nomads.

Only You Boutique Hotel Madrid

This boutique hotel sits inside a 19th century palace in a trendy neighborhood filled with shops, restaurants, and bars. It combines modern design with classic Colonial architecture to create a truly one-of-a-kind space. This hotel has just 45 rooms, some with terraces.

You’ll find Chocolateria San Gines in the heart of Madrid just a short walk from Puerto del Sol. The intimate cafe traces its history to 1864, when it began developing its reputation as an after-theater dessert destination. Chocolateria San Gines is tucked behind one of Madrid’s oldest churches and serves up its signature dark hot chocolate and churros around the clock.

For a truly memorable meal, head to Sobrino de Botin, the official oldest restaurant in the world and a favorite of authors Ernest Hemingway and F. Scott Fitzgerald. Sobrino de Botin opened its doors in 1725 and continues to base its dishes on its original recipes. Among those recipes? The roast suckling pig that earned a mention in Hemingway’s “The Sun Also Rises”.

This upscale restaurant is famous for its tasting menu, which features seafood and traditional Spanish cuisine. You can wear your casual clothes, but expect to pay more than you might for the average meal in Madrid.

Dos Cielos Madrid is no ordinary hotel restaurant. Located inside the five-star Gran Melia Palacio hotel, Dos Cielos is the brainchild of Michelin award winning TV chefs Javier and Sergio Torres. Like the Barcelona location of Dos Cielos, the menu here is inspired by their grandmother and includes items like crunchy suckling pig and a top sirloin cap steak marinated for 90 days.

This restaurant is off the typical tourist path and outside the city center, but if it’s a traditional Cocido Madrileño you’re after, it’s worth the trek. This is the place to go for the city’s famous chickpea and meat stew. It’s also the kind of restaurant you’ll need to plan ahead to visit. It typically has a waitlist longer than many of its Michelin-starred counterparts.

Corral de la Moreria is the place to experience flamenco in Madrid. This venue has been hosting live flamenco shows since 1956 and holds performances every night of the week. And if it’s dinner and a show you’re after, there may be no better place. Coral de la Moreria has a Michelin-starred restaurant on site.

Puerto del Sol is the place to hang out in Madrid. Located in the heart of Madrid, it is the city’s best known public square and home to the clock whose bells mark the beginning of the Spanish New Year. Puerto del Sol is also the official center of Spain’s road network.

This is Spain’s main national art museum. Along with the Thyssen-Bornemisza Museum and the Museo Reina Sofía, the Prado forms Madrid’s Golden Triangle of Art. The museum was founded as a museum of paintings and sculptures in 1819. It’s collection includes pieces by Francisco Goya, El Greco, and Diego Velazquez.

The Royal Palace of Madrid is among the largest and most opulent palaces in Europe, boasting more than 1.45 million square feet of space spread over 3,418 rooms. Public tours visit several opulently decorated room housing paintings by artists including Francisco Goya and Diego Velazquez. The Palace is also home to the world’s  only complete Stradivarius string quintet and hosts changing of the guards ceremonies on Wednesdays and Saturdays.

Plaza de Cibeles is a public square anchored by the iconic Cibeles Fountain, which has stood here since 1782. This spot offers one of Madrid’s best known views and is surrounded by four pieces of legendary Spanish architecture, including the former post office that now serves as Madrid City Hall. Plaza de Cibeles also marks the beginning of Madrid’s arts district.

An Egyptian temple may be the last thing you would expect to find in Madrid, but that’s exactly what the Temple of Debod is. This Egyptian temple traces its history to the 2nd century BC. It was given to Spain by the Egyptians and moved to Madrid, where it was rebuilt stone by stone and opened as a tourist site in 1972. If you’re looking to soak in a gorgeous Madrid sunset, this is one of the best places to do it.

Gran Via is a nearly mile-long retail paradise where shoppers can expect to find a mix of luxury boutiques and mainstream brands nestled among some of the city’s finest architectural gems. Retailers along the Gran Via include H&M, the Real Madrid Official Store, the Atletico Madrid Official Store, and the largest Huawei store in Europe.

If you’re looking to shop til you drop, you may want to head straight to Calle Preciados. This lively area is home to restaurants, impromptu performances and popular retailers including Zara Mango, Desigual, Camper, and Sfera.

If you’ve got Spanish luxury on your mind and money in your pocket, head straight to Calle de Serrano, home to names including Loewe, Manolo Blahnik, Agatha Ruiz de la Prada, and Adolfo Dominguez. This is also where you’ll find an outpost of Spain’s leading department store El Corte Ingles.

Mercado de San Miguel opened as a wholesale food market more than 100 years ago. Nowadays, it’s the place to sample everything from Iberian ham to fresh fish and tapas from more than 20 stands serving up authentic Spanish food.

Las Austrias: This is the heart of old Madrid. It has been home to palaces, churches, and monasteries since the 16th century. It’s now home to a key gathering spot, Plaza Mayor as well the Royal Palace and Corral de la Morería, a flamenco spot whose guests over the years have included Ernest Hemingway, Pablo Picasso, Che Guevara, and Demi Moore.

Las Letras: This lively neighborhood known as the Literary Quarter is a book lover’s paradise. This is where you’ll find the former homes of icons of the Spanish Golden Age, including Miguel de Cervantes, author of Don Quixote. The streets here are narrow, car traffic is limited, and the bohemian vibes run deep.

Chueca: This is the heart of Madrid’s LGBTQ community. It’s a lively area filled with bars, cafes and shops and at the center of Madrid’s iconic Pride celebration each year

Malasana: This area in central Madrid is the city’s hippest neighborhood. It’s known for its vintage shops, one-of-a-kind boutiques and its role in helping Spain return to democracy. This is where you’ll find the live music as well as edgy clubs.

Madrid is one of Europe’s sunniest cities, boasting more than 300 days of sunshine each year. It sits at higher altitude than you might expect, giving it some serious seasonal temperature swings. Summers are hot with temperatures reaching over 100 degrees, though a relatively dry climate makes the heat a bit more bearable. Winter temperatures can drop into the freezing range, but severe snowstorms like the one that blanketed the city in January 2021, are rare. Spring and fall offer the most pleasant weather if you can dodge spring rains.

The following are average temperature highs and lows by Month in Fahrenheit.

A third runway at Heathrow may still never happen