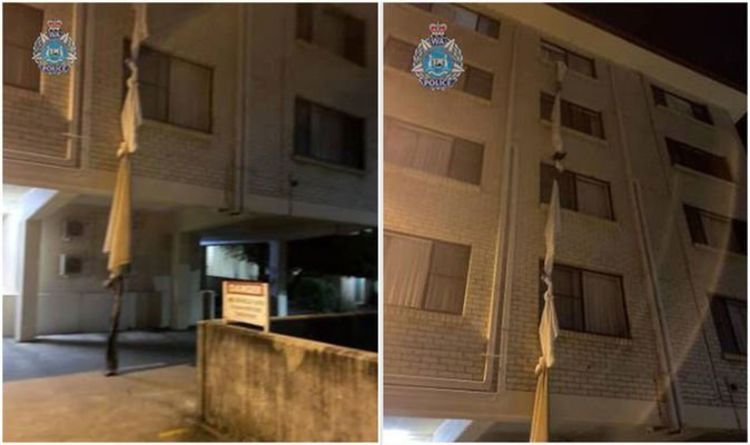 A man escaped from his quarantine hotel in the Australian city of Perth on Tuesday evening. The 39-year-old man is reported to have tied together bedsheets to create a make-shift rope which he then used to scale down from his fourth-floor room.

He has been arrested by Western Australia Police.

According to Reuters, the man arrived in the West Coast city on a domestic flight from Brisbane.

Currently, Australia has in place state-wide entry requirements in a bid to stop COVID-19 cases from spreading across the country.

Though the man applied for entry, it was refused under the state’s border entry rules.

The man was directed to leave Brisbane within 48 hours and was taken to a quarantine hotel for temporary quarantine before his departure flight.

However, according to a Facebook post from the Western Australia Police, the man “climbed out of a window of the fourth-floor room using a rope made of bedsheets and fled the area.”

The incident occurred just before 1:00am on Tuesday.

They also shared an image of the homemade rope hanging out of the hotel window.

Around eight hours later, the quarantine hotel guest was located on the other side of Brisbane where police arrested him.

According to reports, he has been charged with failing to comply with a direction and providing “false or misleading information”.

The anonymous man is said to have tested negative for COVID-19 and did not give a reason for his actions.

Australia has some of the toughest border entry restrictions in the world, with its borders currently closed to “most arrivals” according to the Foreign, Commonwealth and Development Office (FCDO).

“Australian citizens and returning permanent residents and their immediate family members are permitted to enter Australia without an exemption,” states the FCDO.

“Travellers who meet exemption criteria or have a compassionate or compelling reason to enter Australia can apply to the Australian authorities for an exemption.”

However, there are “high levels of demand for exemptions” and the FCDO warns there “is no guarantee of timing of a decision or the outcome”.

Those with an urgent and necessary need to visit Australia are advised to do so between three months and four weeks in advance.

The Australian Government Department of Health states: “Travel restrictions between states and territories and in some remote areas of Australia are in place to help prevent the spread of COVID-19.”

States and territories within the country have the right to impose their own travel restrictions.

The Australian Government adds: “In some states and territories, you may have to pay a contribution to the cost of quarantine.”

See the flowers at the Keukenhof garden in Holland virtually

This Photo Perfectly Captures How the U.S. Is Handling COVID vs. Canada