Revenge is a dish best served cold – which is why this bloke bided his time before confronting his cheating partner.

The Austalian man hatched a plan to humiliate his girlfriend in the most public way possible.

He headed to Melbourne Airport to greet her with a brutally honest sign.

So what do you make of his payback plan?

Krystal, an Australian holidaymaker, snapped a picture of the man at the airport.

To the amusement of the onlooker, the unnamed chap was holding up a sign that read: “I know you cheated.”

Clearly surprised at what she was witnessing, the traveller posted a snap of the moment on Twitter.

She captioned the image: “At Melbourne airport today.

“He was waiting to greet his cheating partner… I AM DECEASED.” 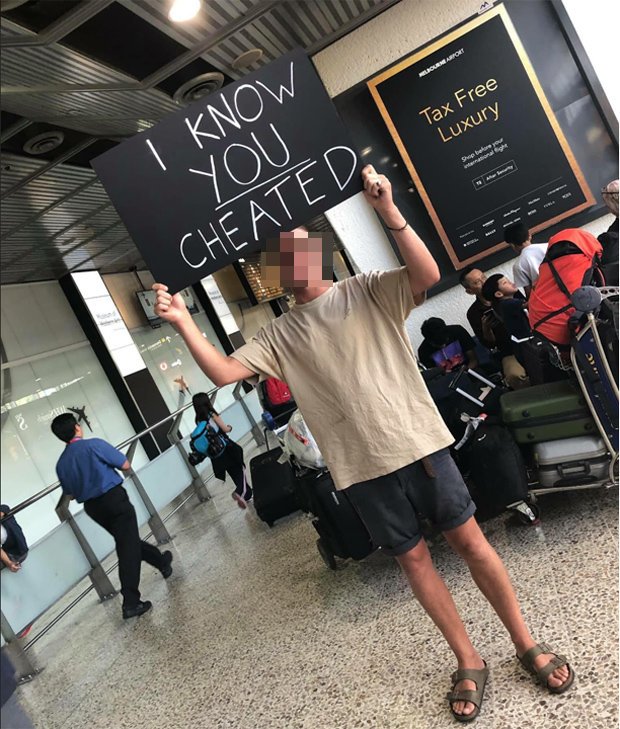 It didn’t take long for Krystal’s Twitter post to go viral, racking up 76,000 likes on the platform.

Many laughed at the bloke’s brazen revenge plot, with some branding him a “genius”.

One commenter remarked: “I love it. Her loss!”

Another said: “Genius. Is the partner going to greet him or walk past him like they don’t know each other?”

Others were devastated that Krystal didn’t hang around to watch the confrontation.

One wrote: “Surely you stuck around to video her reaction?!”

Another confessed: “I also need an answer.”

Sadly, there’s no news on how the accused woman reacted to the sign.

Only one thing’s for certain – it must have been a very awkward reunion.

Man kicked off flight for wearing a gas mask

Play at being Robinson Crusoe on this remote island in Belize

TravelPulse Podcast: How the Travel Industry Can Be More Inclusive
We and our partners use cookies on this site to improve our service, perform analytics, personalize advertising, measure advertising performance, and remember website preferences.Ok