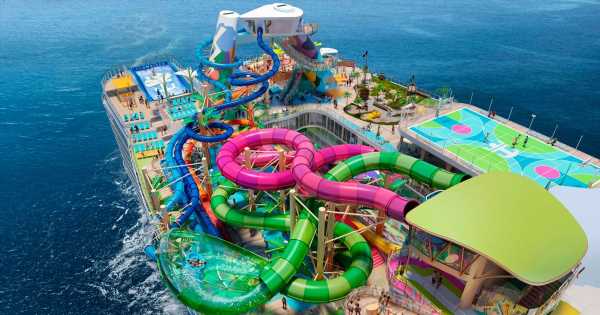 Royal Caribbean has just revealed a first look at its epic new cruise ship Icon of the Seas, and judging by the pictures it's going to offer some pretty incredible holidays.

The mega ship will boast the world's largest water park at sea with SIX waterslides, seven pools, a huge swim-up bar, a five-deck high park, the first suspended infinity pool at sea, a theatre and even an ice rink.

That's not counting all of the bars, restaurants, and entire neighbourhoods dedicated to luxury cabins and family suites.

In fact, it's going to be the world's largest passenger ship ever built – a title currently held by another Royal Caribbean ship, Wonder of the Seas.

It's not surprising considering Icon of the Seas will have EIGHT neighbourhoods for families to explore.

One of the biggest highlights has to be 'Thrill Island', which will be home to the massive water park, complete with SIX waterslides.

There are some real adrenaline-inducing options too including Pressure Drop, with a 66-degree incline, and Frightening Bolt which is the tallest drop slide at sea.

It ends with holidaymakers swinging 154 feet above the ocean – definitely not for the faint-hearted!

Those who need a bit of downtime after all of the excitement will find plenty of options at 'Chill Island', where four pools await including Swim & Tonic, a large swim-up bar, and Royal Caribbean’s first frozen cocktail bar.

For families with kids aged six and under, the 'Surfside' neighbourhood will likely be a hit thanks to its splash pools, carousel, arcade, restaurants, lounges and kids' clubs (as well as a club for teens).

For grown-ups, the Hideaway neighbourhood will have a beach club vibe – and the world's first suspended infinity pool at sea!

Icon of the Seas is currently set to sail in January 2024, with bookings opening on October 25. You can find out more on royalcaribbean.com.

What do you think of the new cruise ship? Let us know in the comments.

Sam Wallace’s favourite travel memories, from Muriwai to Bermuda – A Life in Travel