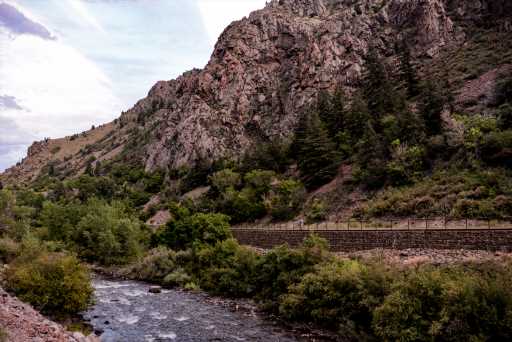 A new multi-use trail in Clear Creek Canyon that offers spectacular views of the canyon’s soaring rock walls and honors Golden’s 19th-century roots opened this week, extending the ambitious Peaks to Plains trail that one day will stretch 65 miles from the South Platte river to the foot of Loveland Pass.

The extension that debuted Wednesday already connects to the existing Clear Creek trail that runs through Golden and Wheat Ridge, eventually connecting with the South Platte trail north of Commerce City. For now, its western terminus is located near Tunnel 1 on U.S. 6. The next 3-mile segment in the canyon is in the design stages, with groundbreaking expected this winter, according to Scot Grossman, the project manager.

At $19 million, the 1.75-mile Gateway segment extension, located at the mouth of the canyon at the western edge of Golden, marks the largest capital project in Jefferson County Open Space history. It includes more than 22,000 square feet of sidewalk and required the installation of two new bridges over Clear Creek. One of them, located near Tunnel No. 1, weighs 43 tons and was transported to the site in three segments.

“It’s a legacy project,” Grossman said Wednesday at the sprawling Gateway trailhead parking lot. “This is the gateway to Clear Creek Canyon. It’s right here at the intersection of 58, 93 and 6. I don’t how many people drive by, sit at that light every day, but this is what people are going to see. This is the beginning. This is the front door.”

When the trail is completed through Clear Creek Canyon, it will be a boon for cyclists because they are prohibited from riding on U.S. 6.

The concrete trail, which is stained a rust color to harmonize with its surroundings, is 10 feet wide. To make it ADA accessible, the maximum grade is only 5%.

The creek currently is running strong, enhancing the experience of the trail extension with the sound of whitewater rushing over small rapids. But there are about 1.75 miles of a new path for cyclists, runners and walkers. Running parallel above the trail is the Welch Ditch, which has a history extending back to 1871. That’s only 12 years after the discovery of gold further up Clear Creek near Idaho Springs, leading to the creation of Golden and Denver.

The Welch Ditch, parts of which include a wooden water flume, brought irrigation water from a dam near Tunnel 1 to Golden and eventually Lakewood. It no longer transports water but serves as a hiker-only trail, parts of which traverse what’s left of the flume. The Gateway project included the replacement of some of the wood in the flume. Other parts of the Welch Ditch are dirt trail.

There are multiple connections between the Welch Ditch and the Gateway segment below. The Welch Ditch trail also provides access to rock climbing areas.