Home » Travel » On Location: Sam Heughan on His ‘Men in Kilts’ Road Trip Through Scotland 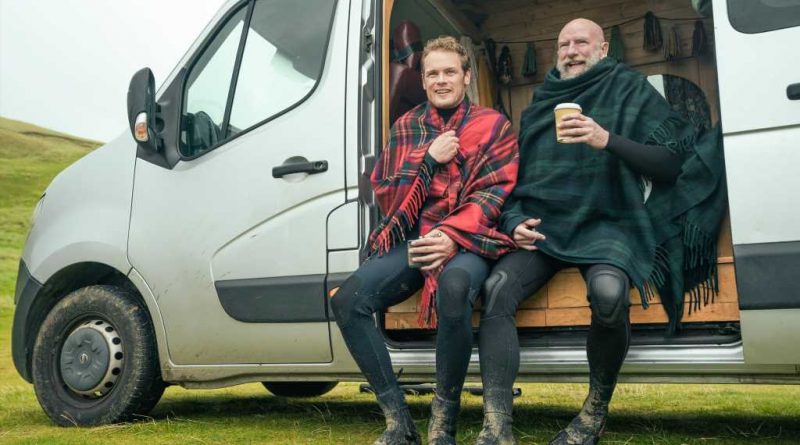 All products featured on Condé Nast Traveler are independently selected by our editors. If you buy something through our retail links, we may earn an affiliate commission.

You get the feeling Sam Heughan doesn’t do well with idle time: While starring in the hit Starz show Outlander, he managed to release both a New York Times bestseller—Clanlands, written with co-star Graham McTavish—and an award-winning whisky brand, Sassenach (“Hopefully wherever you are in the world, if you taste it, it’ll take you back to Scotland”). Now, he’s adding “travel show host” to his expansive resume, teaming up with McTavish again on Men in Kilts: A Roadtrip with Sam and Graham. In a period of respite between surging COVID-19 numbers last summer, the pair loaded up a camper van and drove across Scotland, making stops in Edinburgh, Glencoe, Skye, Lewis, Inverness, Braemar and more, exploring Scotland’s food, sports, music, superstitions, history, and culture.

We caught up with Heughan ahead of Men in Kilts’ February 14 debut on Starz to learn about the highlights of his adventures with McTavish—as well as the moment when things got a bit, well, chilly.

How did the idea of a travel show with Graham come around?

Working on Outlander, I saw and loved the enthusiasm about Scotland—about the Highlanders and Highland culture. Initially, we were discussing making a podcast, but then it really sprouted arms and legs and was fully formed and turned into this show that we have now—just exploring Scottish culture and sharing that with the rest of the world. Who wouldn’t want to go on a road trip and eat great food and see great sights?

Shooting a travel show in the middle of 2020 must have been a logistical nightmare. Walk us through what it was like.

It was just after the first lockdown, so things were opening up in Scotland. I think, to be honest, we were a little bit of a guinea pig for other productions—we were one of the first ones to go. Because it’s a small show and very contained and we were up in the Highlands of Scotland, the risk was relatively low. But it was a new world of shooting in this COVID environment, and it was a lot to get your head around the different protocols. We’re very, very lucky that we’re safe, and that we’re able to keep working when other people aren’t, so hopefully we can bring a bit of joy to people during this time.

I read that there was a 67 percent increase in tourism to a lot of Outlander locations. Do you feel a responsibility, in a way, of being this global ambassador for Scotland?

Not a responsibility, but I feel very honored that Scotland has been celebrated through Outlander. Certain historic buildings that we’ve shot at have received incredible numbers of tourists—Doune Castle, which we feature in Men in Kilts but also in Outlander, had over 200 percent increase—and a lot of these buildings have been able to regenerate and rebuild. So it’s been a fantastic way to support these historic buildings and the tourism industry. I learned a lot about Scotland doing Outlander, and just wanted to learn more. So I got myself a trusty camper van and filled it full of Scottish goods and my bearded friend, and we set off.

Even without the pressure of a show, picking the right travel partner can make or break a trip. How did you decide to do this journey together and what was that dynamic like?

On the exterior he’s this gruff, aggressive Scotsman. He plays lots of very macho characters in TV and film—but actually, in real life, Graham is a big pussycat. He has such a big heart, he’s a lot of fun, and he’s a great historian. And I think that we complement each other: I am a bit more of a doer; I like to go and do activities and get out there, and he’s probably a bit more reluctant. He’s definitely one that likes to be driven around and recline and get snacks and cafe lattes as much as he wants. We really are each other’s yin and yang. A lot of the time I’m winding him up and putting him in places where he doesn’t want to be. But that’s the joy of the show, right?

Although he also put you in a place that you might not have wanted to be—I know it’s called Men in Kilts, but you had a little kilt-less dip in the Atlantic, didn’t you?

How did that come about?

Well, during the sports episode, we’re playing golf at St Andrews, we’re playing rugby, and we’re at the home of the Highland Games in Braemar…And we decided to have a little competition and whoever lost would have to skinny dip in the North Sea off the coast of Lewis—and it’s pretty damn cold. Normally when people go out swimming or surfing there, they’re wearing a wetsuit. So, yeah, I wouldn’t recommend it for anyone that’s touring Scotland.

Other than North Atlantic water temperatures, what did you discover about Scotland through shooting Men in Kilts?

Most people who come to Scotland go to Edinburgh and drive straight up the coast and back. But if you can get to the islands, they really are magnificent. They have their own character. When we go to Lewis and Skye, they are just incredible to visit. One of my favorite things to do is get a ferry from the mainland to the islands. You get to see the mainland and the wildlife—there’s dolphins, whales, sea eagles. And then of course when you approach, the island sort of comes out of the mist and it is very romantic and quite powerful.

What was the best thing you ate on this trip?

The first episode is about food and drink…[and] it’s so hard to pick the best thing we ate. Tony Singh, who is this wonderful Scottish chef, made us freshly caught lobster—we’d caught it that morning—with seaweed and chili butter, which we cooked on the fire on the beach. And he boiled some new potatoes in the seawater with some seaweed as well. He added garam masala, a bit of spice, and it was, honestly, the best thing I’ve ever tasted. And just being there on a Scottish beach. That day we had already eaten fish and chips on the harbor, but as soon as he started cooking that lobster, we were so hungry. It was just mouthwateringly magnificent.

When you look back at this trip years from now, what do you think will be the highlight of the entire adventure?

There’s just so much we did, from the marching bands on Calton Hill to [visiting] Culloden with historians, to the surfing, to the castles we visit. There’s just so much. And I’m such a huge sports fan, so going to Murrayfield [Stadium] and getting to kick a ball was a dream come true. But to be honest, I think it’s about the friendship: Going on this great road trip with a good friend of yours and getting to share a few whiskies along the way—it was a great experience.

Flight secrets: This is where they keep dead bodies on a plane if a passenger dies onboard