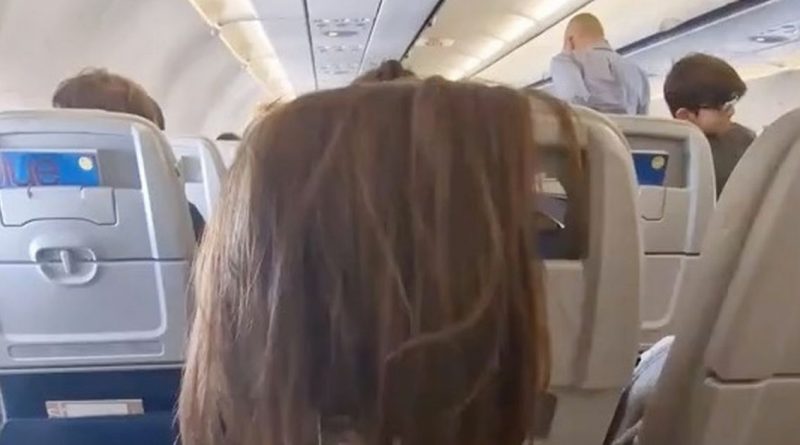 A woman has shared her disgust after a fellow passenger draped their hair over the back of their seat.

We’ve all seen behaviour on planes that’s less than pleasant – from drunk tourists to toenail-clipping customers.

Sometimes the acts are so irritating that people feel the need to call it out a a breach of plane etiquette online.

Julie Christensen, who posts a TikTok account about solo travelling, explained that the long haired holidaymaker almost dunked her locks into her coffee.

She posted a clip of the issue on social media captioning it “the joy of travelling”.

On the video, Julie added the words: “I wish this was staged”. In the comments she joked: “hair plane mode activated!”

The video showed the person directly in front of her on the plane laying their very long brown hair over the back of the seat.

Their tresses draped all the way down the back of the chair to dangle on Julie’s tray table as she pulled her coffee cup away from the hair.

The clip went viral with over two million views – and commenters were gobsmacked by the rude behaviour.

One person said: “Some people have no consideration.”

Another questioned: “Honestly wondering if it really feel better to drape your hair over the seat?”

While a third joked: “I’m too petty to let that slide.”

“Call the flight attendant, it's a health hazard,” exclaimed another.

Some suggested sticking gum in the woman’s hair (we do not recommend this).

While another laughed: “Close your table and let her try and move.”

“The nerve on some people…” one women said.

While another commented: “That happened to me… the flight attendant asked the girl to move her hair…”

It's not the first time a passenger has been slammed for putting a body part in someone else's seat.

TikTok creator, Clara, shared the video from her Southwest Airlines flight of a fellow passenger stretching their foot towards her – and millions of viewers were horrified.

While another Reddit user shared a snap of a fellow passenger using the air vents to dry his shoes .

And, one model was slammed for 'airing out' her knickers in the middle of a flight.

What would you do in this situation? Tell us in the comments…