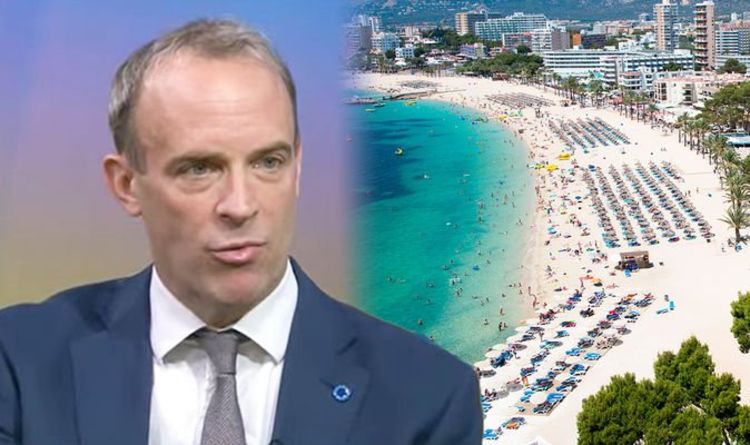 Those holidaying in Spain could still be forced to quarantine even if the traffic light system changes. Foreign Secretary Dominic Raab suggested more countries will be moved to the green and amber travel lists.

Spain is currently on the amber list which means Britons going there need to quarantine on return, as well as following other travel restrictions.

It is thought it could be moved to the amber plus list as soon as next week.

While amber plus countries have slightly more relaxed rules, quarantining is still a requirement.

While on the programme, he was asked about the change of Spain’s status on the traffic light system and how it has caused confusion for some.

He replied: “I totally understand that.

“This is a period of uncertainty as we come out of lockdown.

“I think you’re getting a little bit ahead of where the Government will be next week but of course, what we want to do is open up with the minimum inconvenience for people but we have just got to be totally vigilant for all these different permutations of the variant.”

While he did not confirm what changes will be made, the Foreign Secretary suggested Spain could be moved to a new list.

He said: “You’ll know next week at the latest. You have to judge it on the basis of the traffic light system we have got in place right now.

“We can’t give cast-iron guarantees on what the next review will decide.

“If we didn’t it wouldn’t be a very meaningful review system.”

If it were to be moved to the amber plus list, holidaymakers would still need to quarantine on return and pay for two PCR tests.

Many Britons are sure to be watching for any changes with Spain as it is a popular holiday destination.

However it is the end of all travel restrictions which is on the minds of most people.

Mr Raab stated he was not able to give a date of when travel will reopen.

But the increase in people being double jabbed could speed up when people will be allowed to travel freely.

“I can’t rule things out that the Government will decide but they will make that decision next week in terms of the traffic light system for all of the relevant countries,” Mr Raab added.

“But I think, personally, it feels like the momentum forward is positive because as I say the double vaccination reaching 70 percent of the adult population in this country.

“We’ve done the job that we have to do domestically and as we see other countries catch up, as you like, I think we’re increasingly confident that more countries will go on the amber or onto green.”