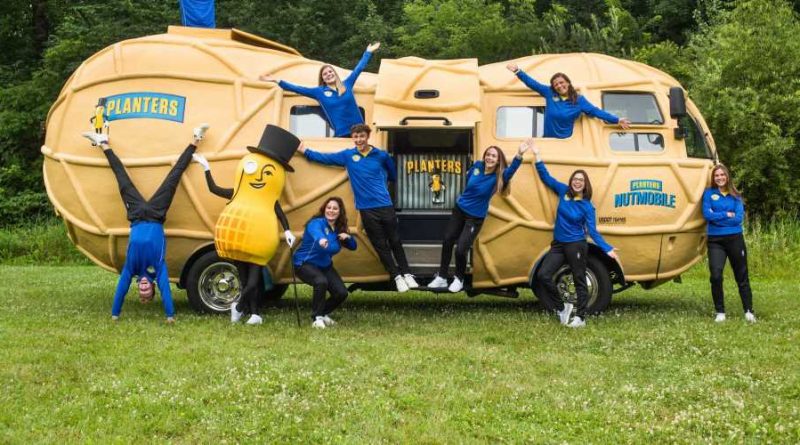 In 1935, Planters designed and built a "peanut car" that was driven by a lucky (?) salesperson. Fast-forward several decades, and that little promo car has been replaced by three gigantic Nutmobiles — 26-foot-long, GPS-equipped, street-legal peanuts that are driven all over the United States by a team of brand ambassadors called Peanutters. If you've ever seen the Nutmobile in a supermarket parking lot and daydreamed about being behind the wheel, then this could be your time to shine. Planters is hiring a new team of Peanutters, and is looking for nine recent college grads who are ready to spend the next year wearing Planters-logo clothing and talking about Mr. Peanut with strangers.

From now through Friday, Feb. 19, Kraft Heinz is accepting applications for would-be Peanutters (and it's also looking for new Wienermobile drivers, if you'd rather be in charge of a four-wheeled hot dog). According to the job description, Peanutters will be responsible for driving the Nutmobile from city to city, creating peanut-related content for Twitter and Instagram, and acting as a "specialist and spokesperson for Mr. Peanut, walking in the shoes of an American icon." The minimum qualifications for the job include a bachelor's degree, a valid driver's license, and the "desire and ability to spend the year on the road…staying in hotels or short-term corporate housing throughout the United States."

On its website, Planters says that new Peanutters will start this one-year assignment by attending Peanut Prep, which teaches them about Planters' history and its products, explains how to plan Nutmobile-related events, and ensures that they're comfortable maneuvering an 11.5-foot-tall, 13,000-pound peanut through traffic. "This opportunity is everything it's cracked up to be," one former Peanutter said. "People love Mr. Peanut and the Nutmobile wherever we go."

That last thing — the maneuverability thing — is an important one, because the Nutmobile isn't exactly what you'd call inconspicuous. Earlier this week, it made a stop at the Museum of Science & Technology (MOST) in Syracuse, New York, and raised some eyebrows by parking horizontally across several employees' designated spaces. "If anyone knows the proud owner of this, please let them know it's about to be towed for blocking my staff spots illegally," Lauren Kochian, MOST's president, wrote on Facebook. (The Nutmobile was eventually moved.)

So, yeah, it sounds like Peanutters can occasionally have an extra-nutty day at the office — but they probably wouldn't have it any other way.

Everything you need to know about French Polynesia reopening

Beyond the Page: 10 Fascinating Literary Destinations for Bookworm Globetrotters