The forested park is dotted with 16 turquoise-blue lakes, waterfalls, limestone canyons, and caves carved over thousands of years. Depending on hiking stamina, visitors can tackle all the major waterfalls, or simply trek down to the aptly named Big Waterfall, whose path holds more than enough adventure and dazzling views to make the trip worthwhile. Whether visiting for a few hours or taking a day-long bicycle tour, Plitvice Lakes National Park does not disappoint.

For those interested in a hike, purchase a ticket for a boat ride across the crystalline Upper Lakes. Step off into a natural wonderland of lush trees, moss-covered rocks, and otherworldly waterfalls. (Read: plenty of opportunities for Instagram bragging rights.) At the end of the path wrapping around the Upper Lakes, hop a tram to the Lower Lakes for a hike to the Big Waterfall.

The park’s paths are actually wooden walkways suspended right over the lakes, curving through the clear waters around rocky outcroppings, and past the park’s many waterfalls (occasionally right over the top of them). The paths are well marked and it’s easy to make the hike easier or more difficult as abilities allow. Those interested in an easy walk can stick to the wooden paths that line the lakes and see the waterfalls from a still photo-worthy distance, while those in the mood for a more serious hike can follow signs to well-carved dirt paths for a closer look. The truly adventurous can even cut through a giant cave.

Though ardent hikers may show up in the latest gear, the park is fun for the whole family, so don’t be surprised to see other visitors in flip-flops, senior citizens with canes, or parents pushing baby strollers down the wooden paths. That said, a little preparation goes a long way, and sunscreen, comfortable shoes, and bottles of water will make the journey easier for everyone. Be prepared for some heat during the summer months, and remember that visitors aren’t allowed to take dips in the lakes, despite how inviting the turquoise waters look.

Camping is not allowed throughout most of the park, but there are some campsites and hotels located close to the park’s entrances, including the Ethnos House, which is seemingly designed with children in mind. The rustic lodgings have a petting zoo, obstacle course, archery, and putt-putt golf course on site that’s completely free for guests. (There’s also a spa, including salt rooms, for the grown-ups).

Plitvice Lakes National Park has been a UNESCO World Heritage site since 1979 and within the first few moments of your journey, it’s easy to see why—the park is truly one of the world’s natural wonders. 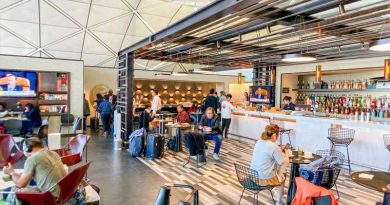 8 ways to get airport lounge access (some are cheap or even free!)

What the world’s most popular beaches look like now