‘If you want low air fares you’ll need to put up with strikes,’ says Ryanair chief Michael O’Leary as thousands face travel chaos amid another pilot walk-out in Germany

If customers want cheap fares, they’ll have to accept strikes, the boss of Ryanair has claimed.

Chief executive Michael O’Leary insisted industrial disputes with the airline’s staff have caused ‘minimal disruption’ as he pledged not to ‘roll over’. And he added that his airline would rather accept strikes than be forced into meeting demands and raising costs.

He made the comments after Ryanair cancelled 150 out of 400 flights scheduled to fly to and from Germany on Wednesday due to a 24-hour strike by pilots and cabin crew. 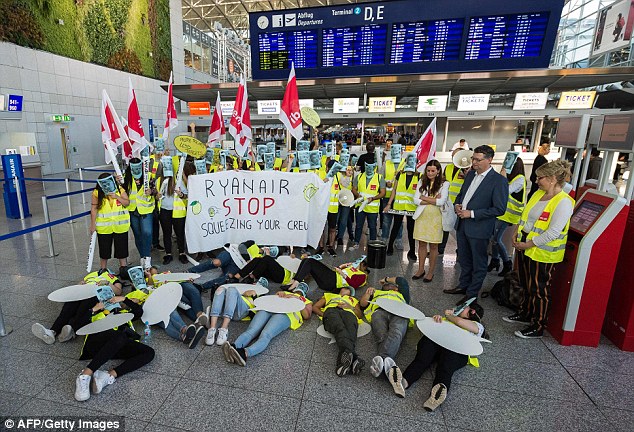 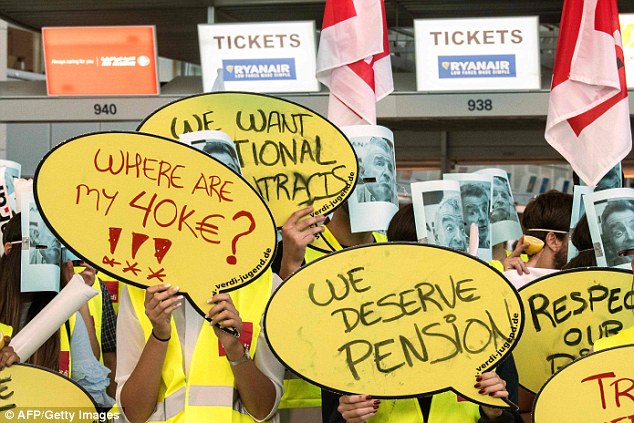 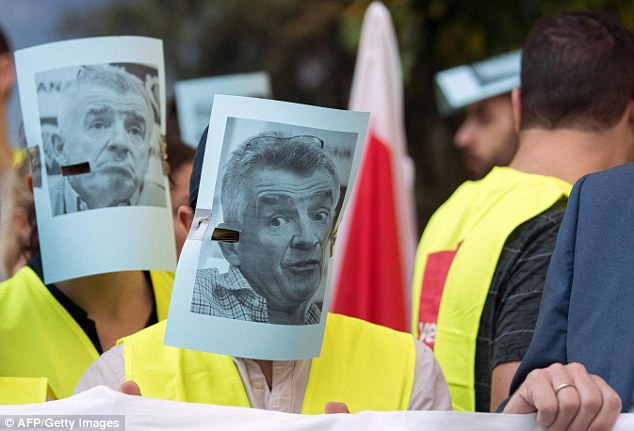 Striking Ryanair staff tape pictures of the airline’s CEO Michael O’Leary to their faces during the strike. He said that he rather accept strikes than raise fares

German unions claim the Dublin-based airline is not offering satisfactory deals on pay and working conditions, but this is denied by Ryanair.

The carrier’s pilots in several countries staged a strike last month, and there have been a series of walkouts by flight attendants.

Speaking at a press conference in the City of London, Mr O’Leary said: ‘We will not roll over every time we’re threatened with a strike and concede some higher cost basis.

‘If you threaten us with a strike and we think your reason for that is unreasonable, then we will take strikes and we will manage our way around those strikes, as we’ve done successfully in Ireland when we had five days of strikes by just 25 per cent of pilots. 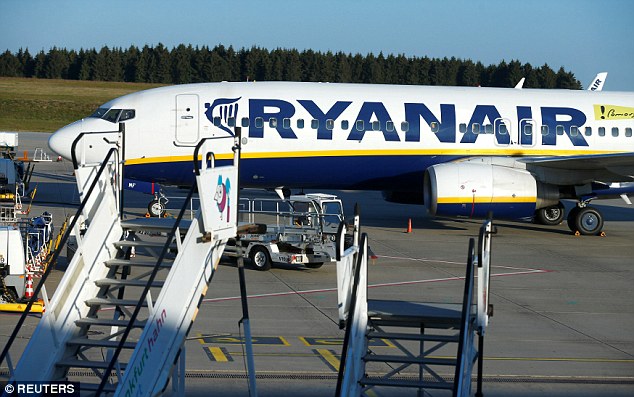 ‘It resulted in 20 flight cancellations a day for five days, out of a total of 300 flights that we operate daily to and from Ireland.

‘We don’t want strikes but we are willing to accept strikes, put up with them, if it means defending our cost basis and our ability to offer low fare air travel to our customers.’

The Irish budget carrier has said it may have to close some bases and slash jobs in Germany if the stoppages there drag on.

Germany’s Cockpit pilots’ federation and the Verdi service workers’ union called the 24-hour strike after they said talks with Ryanair management over pay and conditions were deadlocked.

Verdi spokesman Andreas Splanemann, who was part of a demo at Berlin’s Schoenefield airport, said: ‘We hope that this strike shows a significant effect, that the company realises the employees won’t accept rotten working conditions and bad pay any longer.’

But with affected passengers largely warned off in advance, there were few stranded travellers to see the workers with their placards reading ‘no rights, no flights’.

The strike comes as Ryanair is already bracing for a mass coordinated walkout by cabin crew in Belgium, Italy, the Netherlands, Portugal and Spain.

Union leaders are expected to announce details of the stoppage in Brussels on Thursday.

They have vowed to stage ‘the biggest strike action the company has ever seen’.

Ryanair has been clashing with worker representatives ever since it took the unprecedented step last year to start recognising trade unions in a bid to avert widespread Christmas strikes. 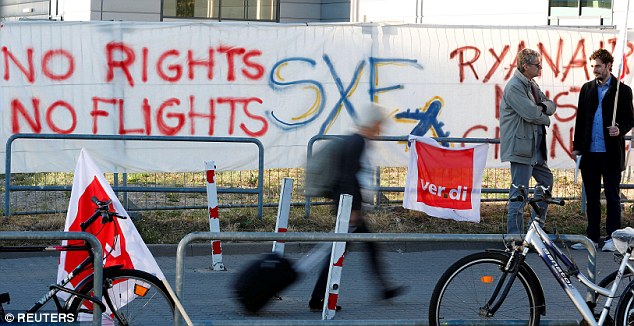 Striking Ryanair workers in Berlin hold up placards reading ‘no rights, no flights’

The airline has however struck some labour agreements since then, reaching its first-ever union deal with Italian pilots in late August.

The breakthrough prompted Ryanair to back down from an earlier threat that it would move several aircraft and 300 jobs from Ireland to Poland.

Germany’s Cockpit and Verdi unions, which represent some 400 Germany-based Ryanair pilots and 1,000 flight personnel, condemned the airline’s attempt to squeeze them with a similar threat.

Cockpit’s vice president Markus Wahl told AFP: ‘This is how Ryanair deals with its employees: putting pressure on them, scaring them and threatening job losses.’

However, Ryanair’s chief marketing officer Kenny Jacobs told a Frankfurt press conference: ‘We are not making a threat.

‘If you have ongoing strikes, that’s the economic impact.’ 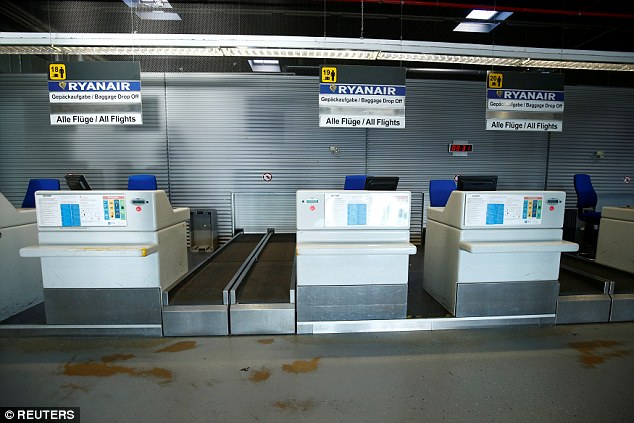 After 150 out of 400 Ryanair flights to and from Germany were cancelled, check-in desks at Frankfurt airport were empty 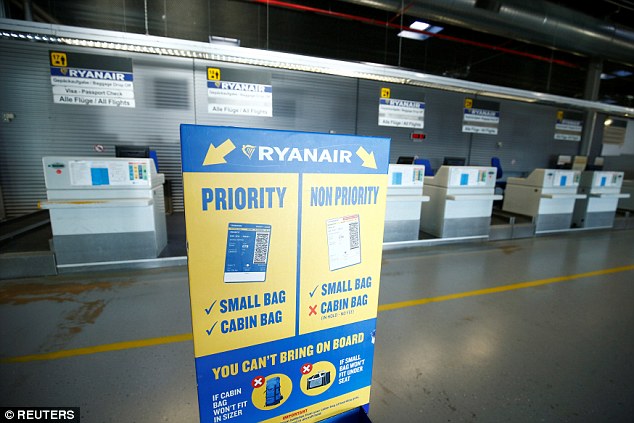 The no-frills airline boasts lower costs per passenger than its competitors and is eyeing profits of around 1.25 billion euros ($1.45 billion) this year.

But staff have long complained that they earn less than counterparts at rival airlines.

Another key gripe of workers based in countries other than Ireland is the fact that Ryanair employs them under Irish legislation.

They say this creates huge insecurity for them, blocking their access to state benefits in their country.

Unions also want the airline to give contractors the same work conditions as staff employees.

Ryanair counters that it has already offered significant pay increases and steadier contracts. 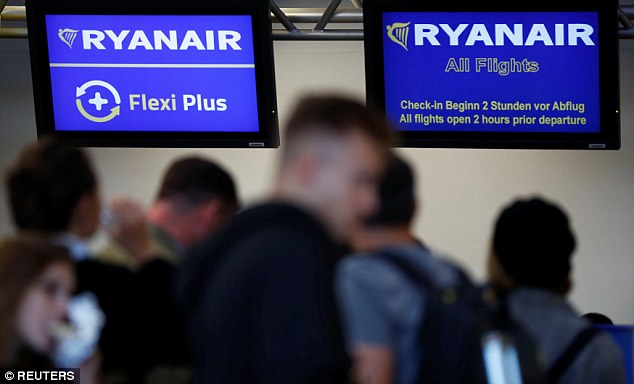 Ryanair passengers gather at Berlin’s Schoenefield Airport. The strike comes as Ryanair is already bracing for a mass coordinated walkout by cabin crew in Belgium, Italy, the Netherlands, Portugal and Spain

‘The wages are so low that they are insufficient to ensure a decent living standard,’ Verdi board member Christine Behle said. 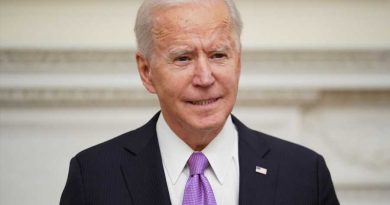 This Disney World Attraction Is Getting a Joe Biden Figure 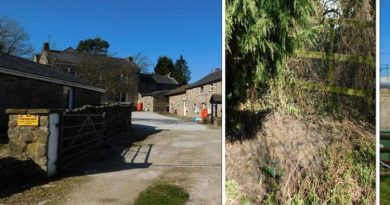 Row erupts in Derbyshire over holiday homes – sewage and parties 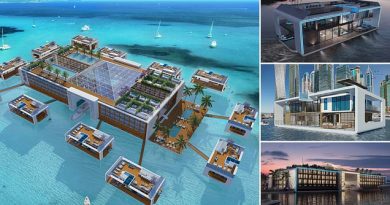 Pictured: The floating hotel with villas that can sail into the sunset