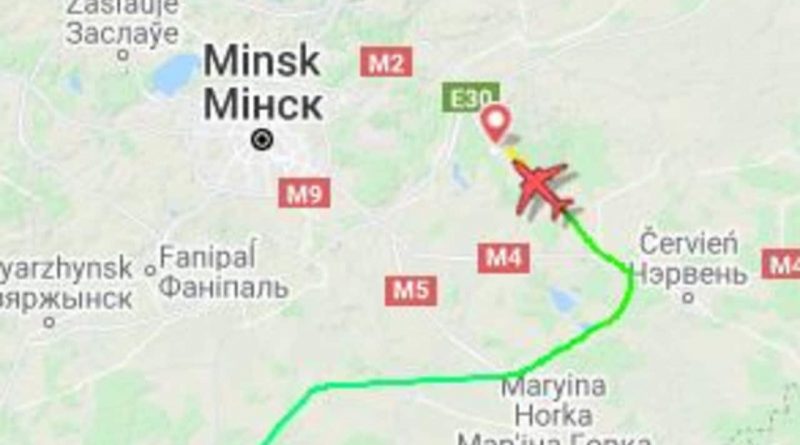 A commercial flight on its way from Greece to Lithuania was forced to change course and land in Belarus on Sunday, allegedly as part of a “shocking” and “unprecedented” plot by the country’s government to arrest one of its passengers.

International leaders have demanded swift action against Belarus, calling the incident a “hijacking” and an act of “state terrorism”.

The plane took off from Athens and was heading to Vilnius, the capital of Lithuania, with 171 passengers on board. Among them was Roman Protasevich, a journalist and vocal critic of the authoritarian regime in Belarus.

The flight’s route took it through Belarusian airspace. Shortly before it would have crossed the border into Lithuania, it suddenly turned east and landed in the Belarusian capital, Minsk.

In a statement, Ryanair said Belarus air traffic control had notified the crew of a “potential security threat on board” and instructed them to “divert to the nearest airport, Minsk”.

The flight path, as shown by FlightRadar24, suggests the plane was actually closer to Vilnius than Minsk when it changed course.

Ryanair said “nothing untoward” was found once the flight landed. It stayed on the ground for about five hours before resuming its journey to Vilnius. During that time, Mr Protasevich was reportedly arrested.

State media has described the incident as a bomb scare.

The plane turned east just before it reached the Lithuanian border. Picture: FlightRadar24Source:Supplied

Mr Protasevich is the co-founder of Nexta, a Telegram channel which has been used to organise protests against the government.

The Belarusian authorities have designated the channel “extremist”, and in November they announced Mr Protasevich was being investigated on charges of disrupting the social order, organising mass disorder and inciting social hatred.

He could potentially face the death penalty.

The Belarusian President, Lukashenko, has been in office since 1994, and is sometimes referred to as “Europe’s last dictator”.

Last year he claimed victory in an election widely denounced as rigged, in which he supposedly got 80 per cent of the vote. The United States, European Union and United Kingdom do not recognise him as the nation’s legitimate leader.

The election result sparked widespread protests, which Lukashenko cracked down on. Many figures critical of the regime have been jailed, while others have fled the country.

According to Reporters Without Borders, Belarus is the most dangerous country in Europe for journalists, hundreds of whom have been arrested in the past year.

Opposition Leader Svetlana Tikhanovskaya and Mr Protasevich are both currently based in Lithuania, where they were granted asylum.

The regime forced the landing @Ryanair plane in Minsk to arrest journalist and activist Raman Pratasevich. He faces the death penalty in Belarus. We demand immediate release of Raman, @ICAO investigation, and sanctions against Belarus. pic.twitter.com/ondPBd0kU9

Needless to say, unless there’s massive pushback against this from the West, we’re going to see repeats of this new tactic in Russia, Azerbaijan, Tajikistan, Kazakhstan, etc. https://t.co/ZPZKW5rgy1

This is an absolutely, cinematically insane move by Belarus even by the usual standards of authoritarian thuggery. To divert a plane with a bomb scare in order to detain a journalist is bonkers. Breaking news, so there are a lot of unknowns. https://t.co/c17pBRV2B0

Outrage is often used/misused on this site. This is a real outrage: https://t.co/dKFqKEenDJ

The Belarus government has forced down a commercial airplane flying over its territory in order to arrest a passenger – an opposition journalist. This is state-sponsored hijacking. https://t.co/6Gn9OO16pu

This is insane. Story developing, but forcing down an airliner with a bomb threat so the government can get detain an opposition figure? This is like a bad movie – only endangering real lives. https://t.co/8kcmNzHhQY

Truly shocking and unprecedented: Ryanair flight carrying Belarusian journalist critical of the regime forced to land in Minsk. The journalist was subsequently arrested and faces 15 years in prison. A true nightmare. This is why I’ll never fly over Russia. https://t.co/0biLWFDMqz

There are conflicting accounts of how the plane came to land in Minsk.

According to Nexta’s editor-in-chief, Tadeusz Giczan, agents of the Belarusian security service were on board the flight and clashed with the crew.

“What we know so far: KGB operatives boarded the plane in Athens this morning together with Roman Protasevich (he noticed dodgy looking people taking photos of him at the gate),” said Mr Giczan.

“Then when the plane entered Belarus airspace, KGB officers initiated a fight with the Ryanair crew, insisting there’s an IED (improvised explosive device) on board. Eventually the crew was forced to send out an SOS (literally moments before the plane would have left Belarus airspace).

“A MiG-29 took off and escorted it to Minsk. Security services entered the plane and arrested Protasevich.”

One of the plane’s passengers spoke to Delfi, a Lithuanian news agency. They said Mr Protasevich put his head in his hands when he realised where the plane was going.

“We asked him what was happening. He said who he was and added. ‘They’ll kill me here,’” the passenger said.

European leaders have reacted with fury, and will discuss tightening the existing sanctions on Belarus at an EU summit tomorrow.

Today Lithuanian President Gitanas Nauseda issued an “urgent” demand for Mr Protasevich to be freed, calling Belarus’s actions “abhorrent”. He called for NATO and the European Union to “immediately react to the threat posed by the Belarusian regime”.

“It is utterly unacceptable to force the Ryanair flight from Athens to Vilnius to land in Minsk. All passengers must be able to continue their travel to Vilnius immediately and their safety ensured,” she said.

“Any violation of international air transport rules must bear consequences.”

“The forced landing of a commercial plane to detain a journalist is an unprecedented, shocking act,” said Mr Mitsotakis.

“We demand all passengers’ immediate release. Tomorrow’s European Council (meeting) must address the need to step up pressure on Belarus. Enough is enough.”

“Hijacking of a civilian plane is an unprecedented act of state terrorism. It cannot go unpunished,” he said.

And former European Council president Donald Tusk said Lukashenko had become a threat “not only to his own citizens but also to international security”.

“His act of state terrorism demands an immediate and tough reaction of all European governments and institutions,” Mr Tusk added.

Palms Casino Resort: Is this the coolest resort in Las Vegas?