Home » Travel » Siena for under £100 a night: Enjoy the budget best of this Tuscan gem 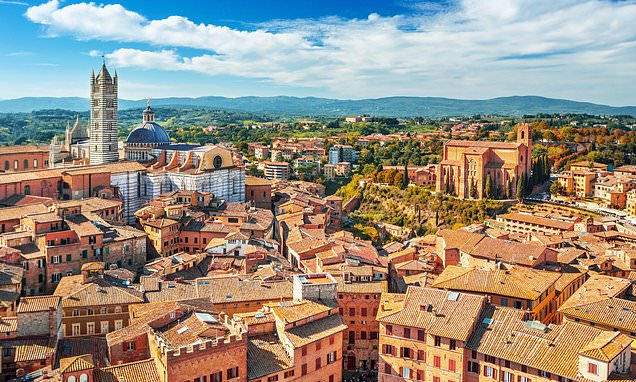 Siena for under £100 a night: Revealing the budget best of this Gothic Tuscan gem, from lively wine bars to homely hotels

There’s much more to Siena than the Palio, the notorious horse race held here each summer.

Though it tends to be overshadowed by neighbouring Florence — its ancient rival — this Tuscan city is a Gothic gem. Galleries brim with glorious gilded paintings. There are medieval palaces, stylish shops and excellent wines.

Most dazzling of all is the Campo, the shell-shaped piazza at the heart of the city. 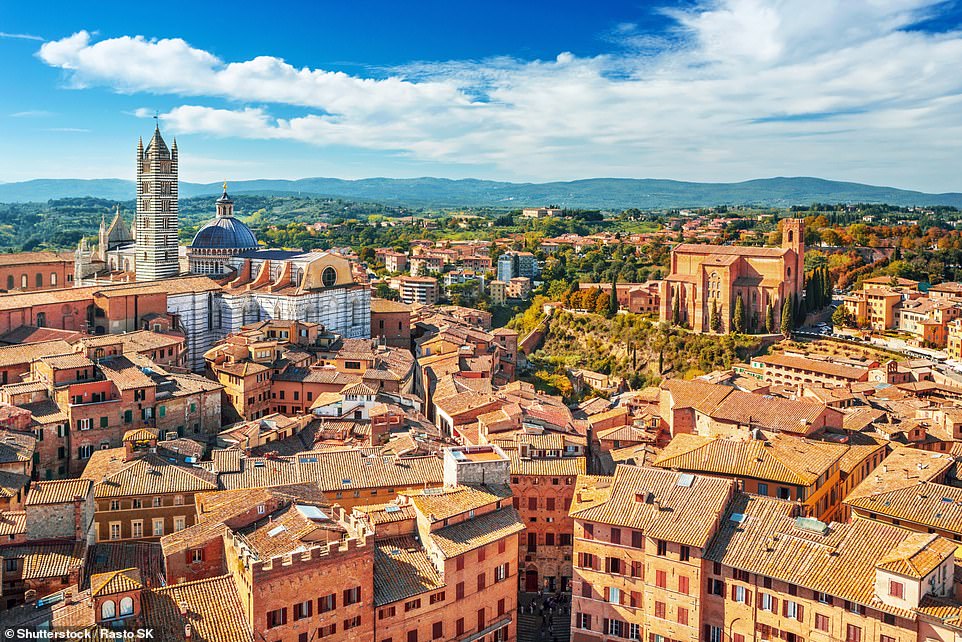 Siena, pictured, is a Gothic gem of a city that’s filled with medieval palaces, stylish shops and excellent wines

Two swimming pools (one for children), a tennis court, a restaurant and leafy gardens make this hotel on the city’s northern outskirts a good choice for families. Rooms with the most character are in the 18th-century villa, but all are clean and comfortable. It’s a 15-minute bus ride to the city centre.

Just outside the city walls, by the imposing Porta Romana, this welcoming hotel deserves its loyal following. Rooms are furnished in basic Tuscan style, but are neat and spotlessly clean.

It has parking and is about a 15-minute walk from the Campo. In summer, you can breakfast in the garden. 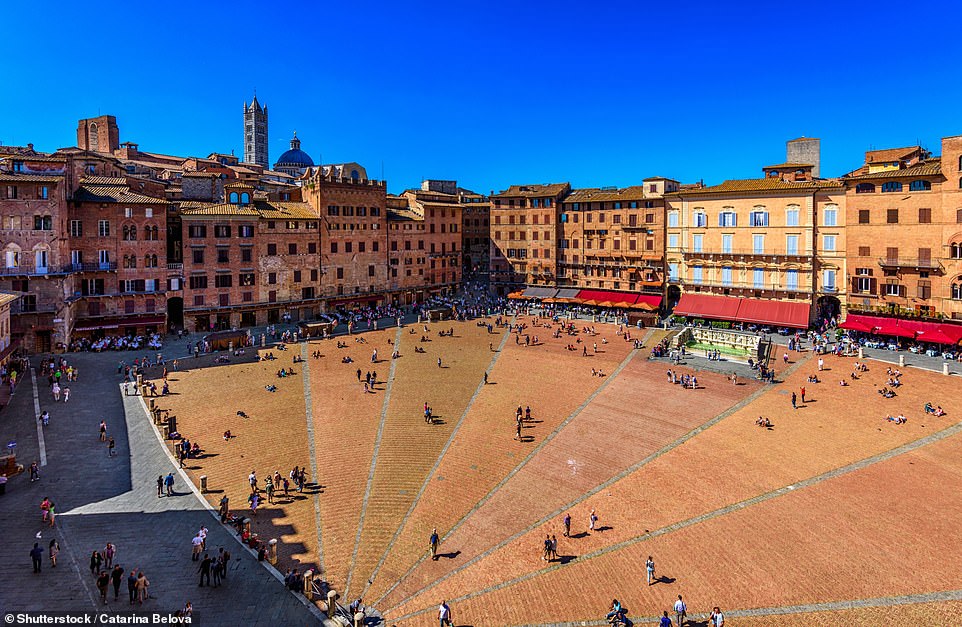 Hotel Santa Caterina is about a 15-minute walk from the Campo (pictured), the shell-shaped piazza at the heart of the city 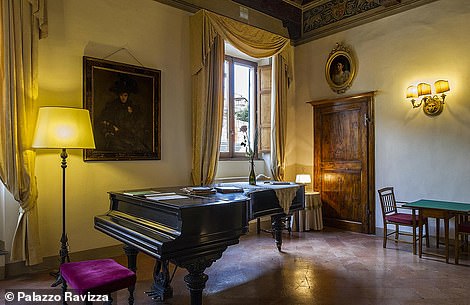 A communal area in Palazzo Ravizza, where the bedrooms are stylish and comfortable and doubles are priced from £93

This former palace, tucked away in the Contrada della Pantera, makes a romantic bolthole. Beamed ceilings, antiques and prints provide period charm, while the bedrooms are stylish and comfortable. Unusually for a city-centre hotel, it has its own parking as well as a tranquil garden. The cheapest rooms overlook the street; the loveliest look on to the garden and Tuscan hills.

This is a family-run pensione with simple rooms, tiled floors and dark, wooden furniture. It’s centrally located — just a five-minute walk to the Campo — and has a panoramic terrace where you can have breakfast, or gaze over the rooftops. Some rooms are en suite, but the cheapest have shared bathrooms.

Not far from the Campo, this lively little enoteca (wine bar) is a popular spot for aperitifs, and has a wide selection of Tuscan wines — many available by the glass (from €5/£4.50). Main courses such as Chianina beef can be expensive, but plates of delicious homemade pasta or salads are reasonably priced (enotecaiterzi.it). 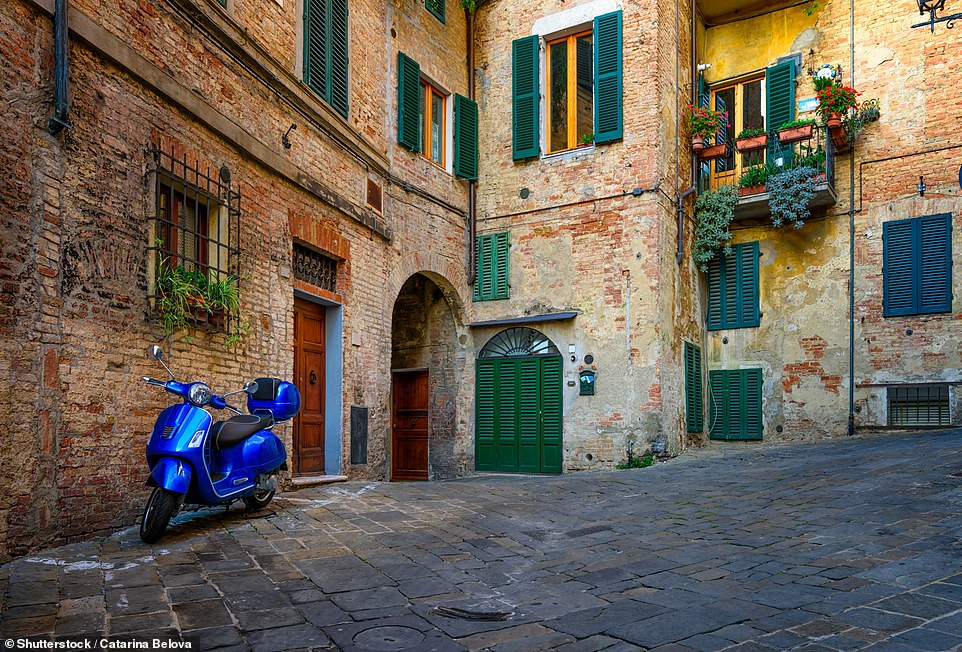 A narrow street in Siena. There’s much more to the city than the Palio, the notorious horse race held here each summer 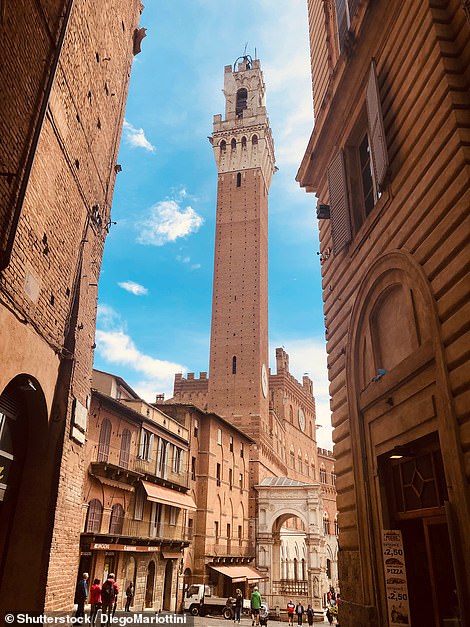 There’s no menu at this cheerfully chaotic osteria, ironically named ‘the skyscraper’ as it’s under an archway near Piazza Salimbeni. Queue for cold meats, olives and cheese followed by pasta — perhaps pici (like thick spaghetti) with ragu. Share tables with locals at lunchtime. It’s on the Via dei Pontani and two courses with wine comes to about £10 to £14.

At first sight, there’s nothing to distinguish this little cafe/bar on Via Rinaldini from the others. However, if you pop in for an espresso and a pastry (about £3.50), you’ll discover its secret — a little balcony with superb views of the Campo.

Perched on a steep hill near the former home of Catherine of Siena, the city’s patron saint, this is a good place to find hearty Tuscan dishes. Grab one of the slightly wobbly seats outside and enjoy filling ribollita (a thick soup made with bread, beans and vegetables) or wild boar ragu with tagliatelle (about £6 for a main course, osterialachiacchera.it). 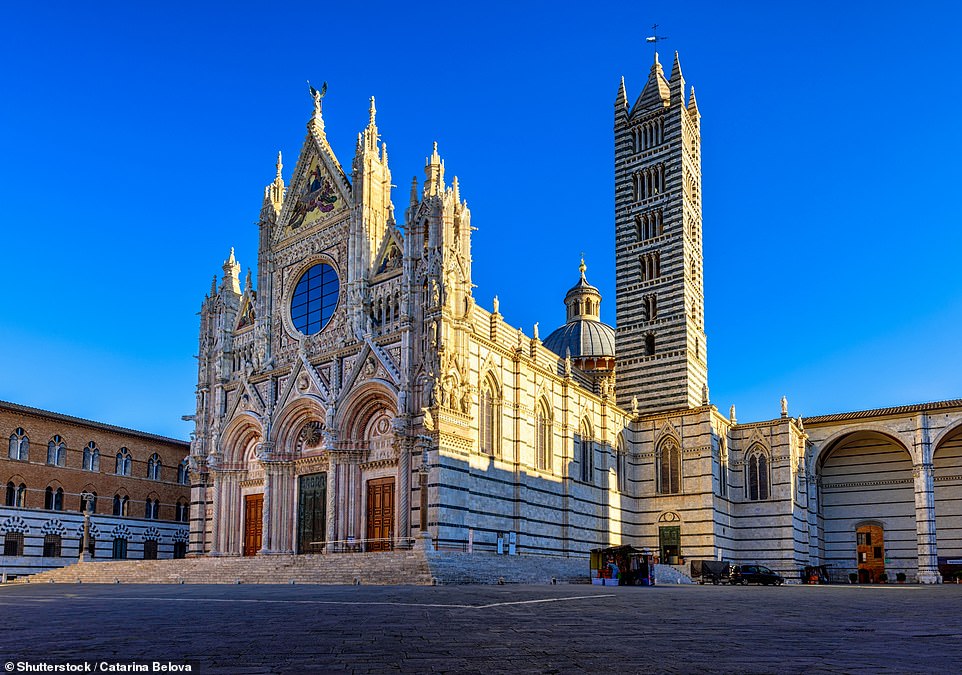 Feast your eyes on an eye-popping mix of stripes, frescoes and ornate carvings during a visit to Siena’s cathedral, pictured above

Siena’s cathedral is an eye-popping mix of stripes, frescoes and carvings so ornate John Ruskin called it ‘absurd’. The floor, or pavimento, features 56 inlaid and graffito marble slabs. Created over 200 years, they depict mythological and biblical scenes. They are uncovered annually for a few weeks (entrance €15/£13, operaduomo.siena.it).

It’s hard to believe the museum Santa Maria della Scala was a working hospital until the 1980s (entrance costs €9/£8, or a joint ticket with Museo Civico costs €14/£12.50, santamariadellascala.com). The highlight here is the Sala del Pellegrinaio — a former ward decorated with 15th-century frescoes of daily life, including one showing doctors studiously examining a urine sample.

See the seat of government 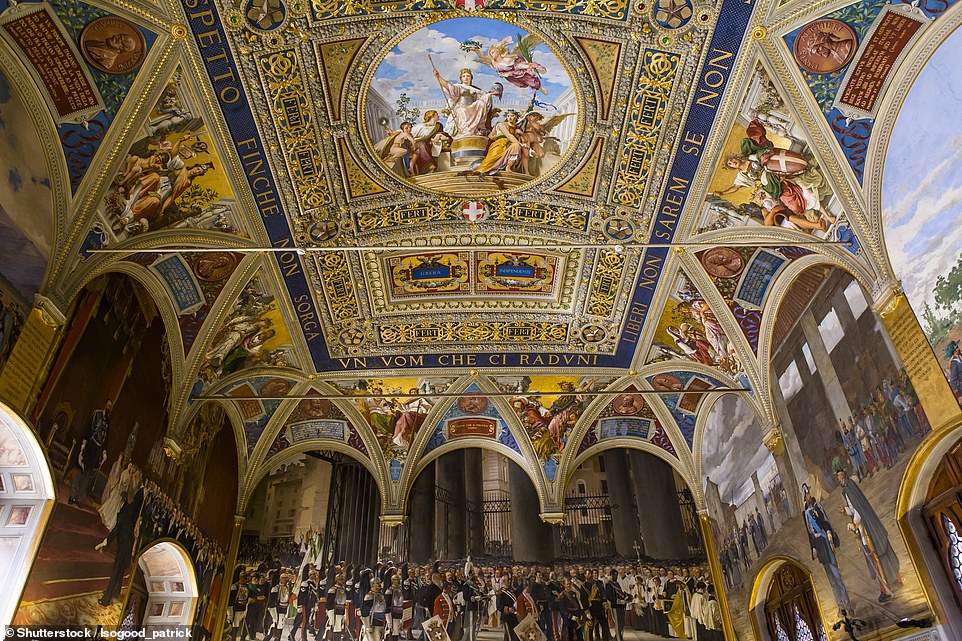 The interior of the imposing Palazzo Pubblico, which was built in the 13th century as the seat of the Sienese authorities

Built in the 13th century as the seat of the Sienese authorities, the imposing Palazzo Pubblico was intended to impress.

How to get there

EasyJet has returns from Gatwick to Pisa from £54 (easyjet.com). From Pisa you can take a train to Siena, via Empoli, or take the train to Florence and then a bus to Siena.

Is the office obsolete? Many travelers hope so