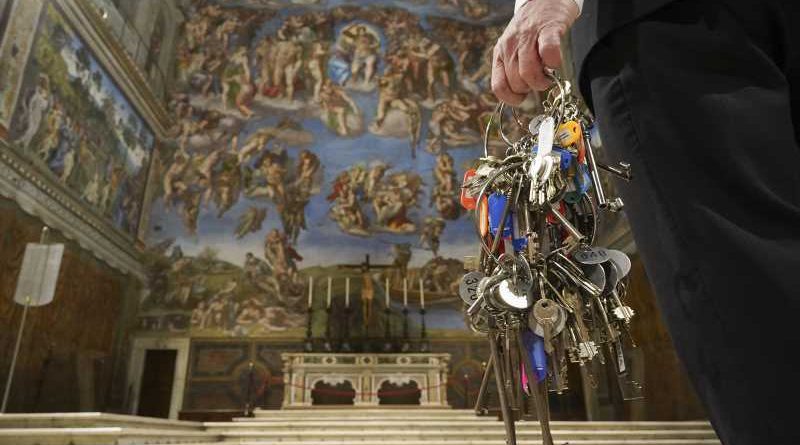 
Photo by AP Photo/Andrew Medichini The 2,797 keys to the Vatican treasures are kept in wall safes overnight in a downstairs “bunker” at the Vatican Museums.

The Associated Press followed Crea on his rounds the first day the museum reopened to the public, joining him before dawn in the downstairs “bunker” where the 2,797 keys to the Vatican treasures are kept in wall safes overnight. As the keys dangled and jangled from giant keyrings he wears around his wrist, Crea wound his way through the Gallery of Maps, past the famed marble “Laocoön and His Sons” statue and finally to the Sistine Chapel.

There, at a tiny wooden doorway, Crea drew out a white envelope from his suit pocket, ripped it open, and pulled out a small silvery-brass key.

Using a small flashlight to guide his way, he slipped the key into the keyhole, turned it gently, and creaked open the door to reveal the still-darkened chapel where popes are made during the secret ceremonies that draw their very name—“conclave”—from the crucial role that keys play in them. Cardinals are essentially locked away “with a key” in the Sistine Chapel and the nearby Vatican hotel for the duration of the solemn vote to elect a new pope.

As a result, the Sistine Chapel key is of particular importance and is handled with its own protocol: After the room is shuttered for the day when the last visitor leaves, the key is put back in a new white envelope, sealed, stamped, and replaced in the bunker wall safe, with its comings and goings duly noted in a thick registry book.

Crea recalls fondly the day that, 3 years into his now-23 years of service, he was finally allowed to open the door to the Sistine Chapel alone. The privilege in the two decades since has given him a chance to visit Michelangelo’s “Last Temptation” and scenes of the New Testament and Old all alone, in the empty quiet of dawn.

“All the statues, all the rooms have a unique history, but naturally the Sistine Chapel always gives you a particular emotion,” Crea said.

Even though the public was shut out of the Vatican Museums for 88 days, Crea and his team of 10 key-keepers kept up their routine of opening and closing doors, since the exhibition rooms had to be cleaned, dusted, and maintained by a small army of museum workers. Restorers took the opportunity to do maintenance work that would otherwise be impossible when the nearly 7 million annual visitors pass through the museums during a normal year.

But 2020 was anything but normal. Only around 1.3 million visitors came, arranging visits around Italy’s two COVID-19 lockdowns. Now, to maintain social-distancing protocols, up to 400 people can be admitted every 30 minutes, with timed tickets purchased in advance online.

Crea, who confesses that he sometimes misplaces his own house keys, will make sure the doors are open for them.

“It is a unique emotion, an incredible privilege for me and my colleagues to have the possibility of showing these extraordinary art works, that are part of our history, to visitors from all over the world,” he said.

Nicole Winfield contributed to this report.

>> Next: A Life-Sized Reproduction of Michelangelo’s Sistine Chapel Arrives in St. Louis

Dive into the world’s best pools