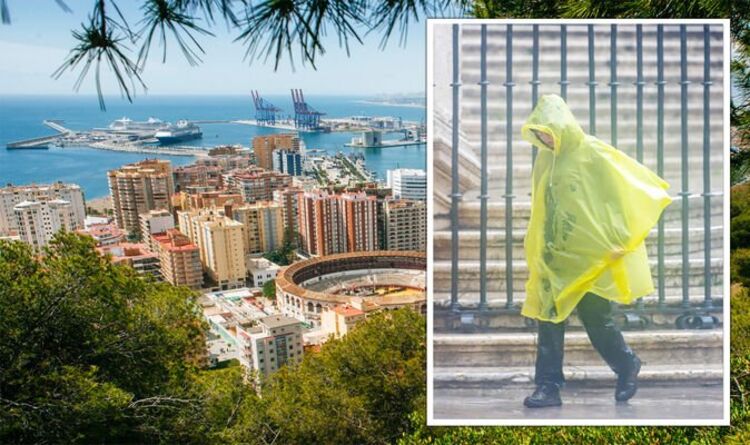 Spain’s Costa del Sol has been hit by extremely heavy rain this week. The downpours have led to amber and yellow warnings being activated.

The western area of the Costa del Sol is expected to see up to 80mm of rain in 12 hours, according to the State Meteorological Agency.

On March 23, the Junta de Andalucia in Malaga activated the first phase of the Emergency Plan for the Risk of Floods in the province.

Marbella’s beaches have also been hit by the rains with Casablanca beach the most affected.

Some roads in the Marbella area have been closed due to the heavy rainfall while branches fell across some routes.

A dozen families were evacuated from Vega del Rio, according to Spanish paper, SUR, to escape possible flooding.

Spain has now experienced 44 percent more rain than normal for the whole month of March.

Almeria, Cadiz, Murcia, Seville and Alicante have also been warned to expect heavy rainfall, although Malaga is expected to be worst impacted.

Sea conditions could be very rough in all areas, so tourists should be careful to follow local advice at the beach.

Aemet spokesperson, Ruben del Campo, said: “We started the astronomical spring with an episode of rains in the Mediterranean.

“There is still a long way to go to reverse the situation of low rainfall that took place during the autumn and winter.”

Low rainfall during autumn and winter has meant that some Costa del Sol areas are also facing water shortages despite March’s downpour.

Several areas of Portugal were also under a weather warning this week due to heavy thunderstorms.

Evora, Beja, Setubal and Faro were under a yellow weather warning and faced heavy rainfall.

The Canary islands are also expected to see rainfall this week despite a sunny start on Monday.

British tourists will need to be fully vaccinated to travel to Spain or have a recent Covid recovery certificate.

British teenagers aged between 12-17 will need to have a negative PCR test from the last 72 hours if they are unvaccinated.

Britons do not need to take a test or fill out a passenger locator form on their return to the UK.

The unpopular forms were scrapped last week in good news for British families heading off for an Easter break.