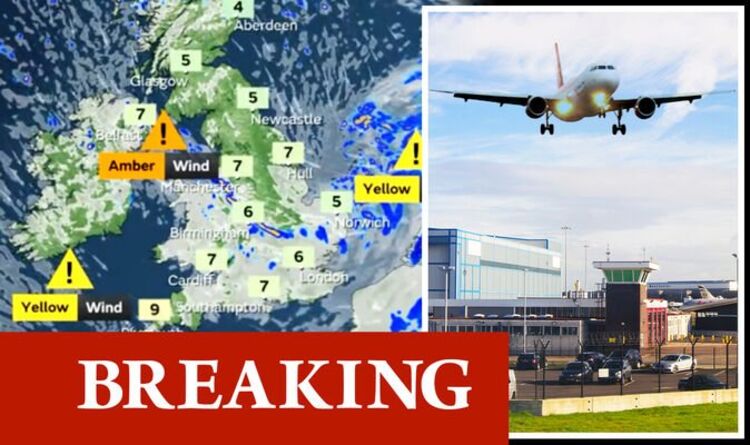 Britain is experiencing its third storm in less than a week as Storm Franklin has been named. In terms of the damage it is causing, the high-speed winds are playing havoc for aeroplanes looking to land at Manchester Airport. According to one plane spotter, there are eight aircrafts being held, with something having attempted to land but the wind is proving too strong to do so.

They wrote: “8 aircraft holding @manairport, some having already attempted landing in this wind.”

@Tunatallulah added more information: “Some are managing to land at the mo – it’s the big planes having the problems.”

Faz Patel MBE arrived into Manchester a few hours ago and tweeted his expereince of landing in Storm Franklin.

He said: “Arrived back @manairport safely after pilot #aborted first landing due to high #winds, flew for another 10 mins & tried again successfully. As a frequent traveller this was a very scary experience. Hats off to @Ryanair pilot #StormFranklin #Airport.”

@brianstockport offered an update: “Three ‘Go Arounds’ already at @manairport Nothing has landed since before 7:00.”

While some passengers are waiting to land and arrive at the airport, those that have are experiencing long delays for thier baggage.

Simon Nicols said: “How long can it possibly take to get baggage of an aeroplane? @manairport 1 hour 10 mins waiting now.”

@13neiljames commented: “@manairport new delay! Apparently baggage handlers aren’t available now so we have to go and find a member of staff for more information. Meanwhile my taxi driver is being charged by the 5 minutes to wait for us in the car park.”

It comes as the Met Office has issued a warning to the public.

“It will be a very windy start to Monday due to #StormFranklin.

“Bands of rain & showers will also be sinking south during the rush hour, & combined with the strong winds may make travel difficult in places.

“Warnings are in force throughout the morning so stay #WeatherAware.”

There has been severe flooding in parts of Northern Ireland, while people in Yorkshire and Manchester have been forced to leave thier homes for safety reasons.

“Severe disruption” means some train customers are urged not to travel.

As for how long Storm Franklin will last, warnngs are in place until 1pm today.

These are Yellow Warnings for wind as much of the heavy rain fell over the weekend.

The other-worldly beauty of deserts captured in fine-art pictures

Hotel secrets: You could be losing money with this common booking error