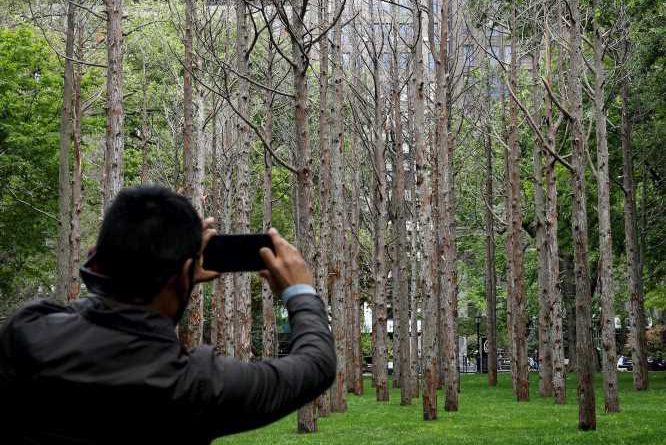 The public art installation, titled “Ghost Forest,” by artist, designer, and architect Maya Lin opened Monday and is a visible warning of the climate crisis. People can visit and walk through the 40-foot-tall grove until November 14, when the installation closes, according to the Madison Square Park Conservacy’s website.

The trees tower over visitors, reminding them of the impact humans have on the planet.

“I call them my gentle giants,” Lin said of the trees at the opening of the exhibition, according to ArtNet. “I wanted you to feel like you’re wandering through something intimate.”

As visitors walk through the barren forest, they can hear a soundscape of calls and songs from endangered and extinct animals that were once native to New York City, which you can listen to on the Madison Square Park Conservancy website.

The sounds were composed by Lin – who is famous for designing the Vietnam Veterans Memorial on Washington, DC’s National Mall and for her work as an environmental activist – in collaboration with the Cornell Lab of Ornithology, according to the Madison Square Park Conservancy.

According to The Guardian, ghost forests exist around the world, and their presence is becoming more common with the ongoing climate crisis as rising seawater, forestry practices, insect infestation, wind events, and fires harm woodlands.

The Atlantic white cedar trees used in “Ghost Forest” came from the Atlantic Pine Barrens of New Jersey and were inundated with saltwater and killed, according to Maya Lin Studio’s website. Along the entirety of the East Coast, populations of this tree are at risk, as the Atlantic White Cedar Initiative notes.

Lin had the 49 trees transported nearly 100 miles into the heart of New York City, Gothamist reports. One thousand native trees and shrubs will be planted in public parks throughout all five New York City boroughs to offset the emissions created during the installation process, according to Maya Lin Studio’s website.

What People Wish They Knew When Planning a Vacation

TSA has Thanksgiving travel tips for flying with food