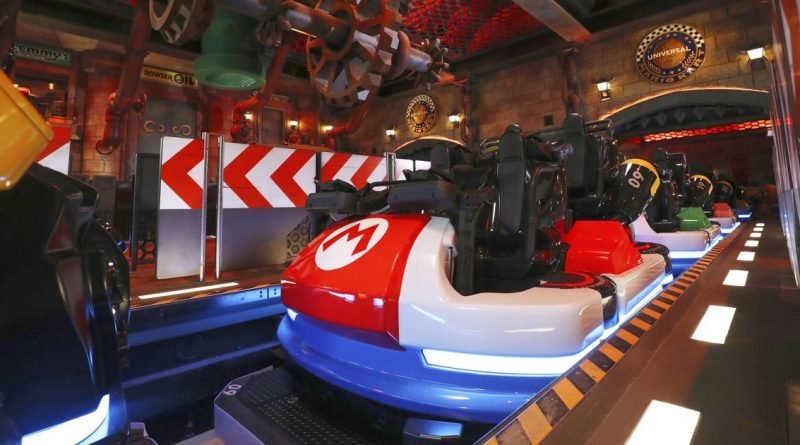 In November, Universal Studios Japan announced it will be opening Super Nintendo World in 2021.

The resort in Osaka is complete with Bowser's Castle and even features its very own Mario Kart ride.

But with coronavirus restricting so much in the world right now, not everyone is able to try the attraction immediately.

Luckily, the park has shared a glimpse by posting a POV tour of the Mario Kart: Koopa's Challenge ride to show what it's like.

Riders sit in life-sized Mario Karts and race along the track wearing Augmented Reality goggles that immerse them into the game.

There are high-tech effects that mean you can throw shells and take out opponents to claim the cup – just like the game.

While the video doesn't offer the AR experience, it goes give a good insight as to what you can expect at Super Nintendo World.

Mario Kart fans can race along the track which has heaps of obstacles from Piranha Plants to Unagi Eels.

Guests can also expect beloved classic courses from the game whether it's underwater or exploring Bowser's Castle. The Mario Kart: Koopla's Challenge isn't the only ride that's on offer at the resort.

Yoshi's Adventure is bound to be appealing for families with younger children.

With this attraction, visitors can climb onto dinosaur's back and follow Captain Toad on a treasure hunt to find the Golden Egg.

Inside the Super Nintendo World, guests can purchase Power-Up bands they can use to take on challenges across the park. By using the app, families can track different locations while competing with other tourists to collect coins to win prizes.

Each band is said to be inspired by different characters – including Mario, Luigi, Princess Peach, Princess Daisy, Toad and Yoshi.

Another exciting areas of the park is Bowser's Castle, which boasts its own grand staircase and statues of the popular characters.

The fun doesn't end there either as guests can purchase themed merchandise, including Luigi and Mario's trademark hats.