Twist and shout! Florida’s new ‘coaster’ is the scariest yet – but don’t worry, there are theme parks to suit all in the Sunshine State

You may not know that roller coasters are now called coasters. Not only that, but in the space of 45 seconds, some will launch you 150ft up in the air, hurtle forwards, backwards, throw in an ‘inverted headline roll’ (you’ll ‘enjoy’ a 360-degree spin) all at a whooshing 60mph.

At least, that’s how the Tigris rolls. It’s the newest addition to Tampa’s Busch Gardens. The orange and black tracks are meant to mirror those of a tiger (not to be pedantic but do tigers sprint backwards?).

It’s Florida’s tallest triple-launch coaster (the definitions matter as there are taller and longer rides but this is the tallest one that launches, rather than hauling you up via a ratcheting chain lift). 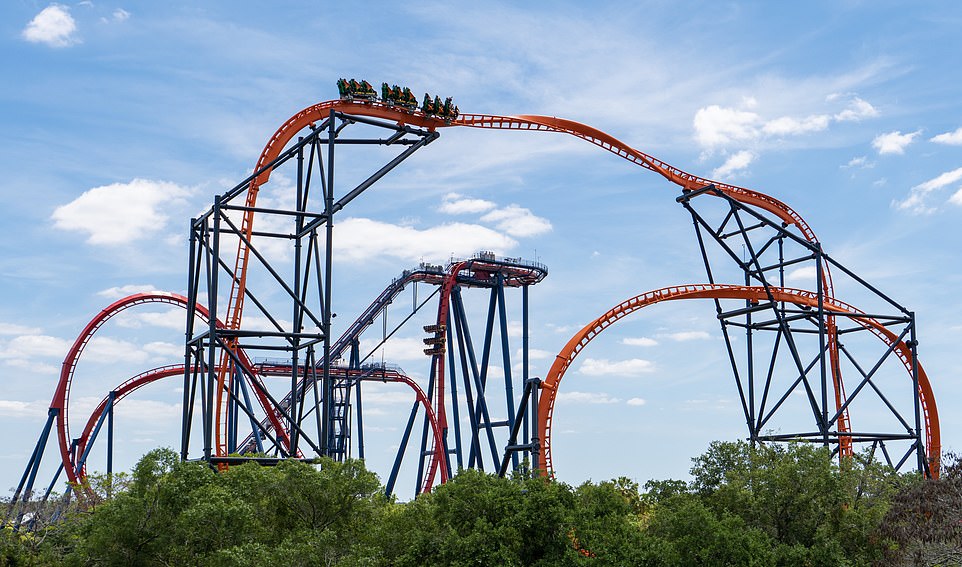 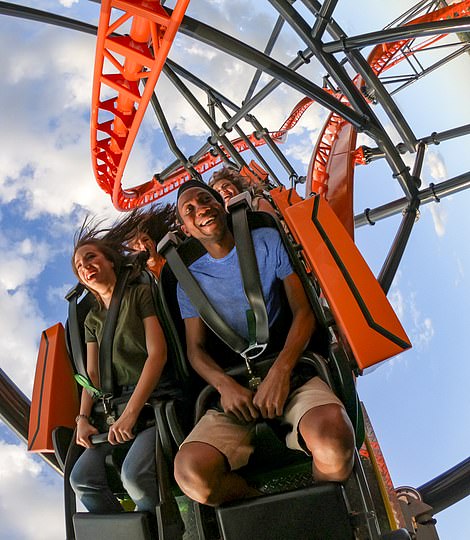 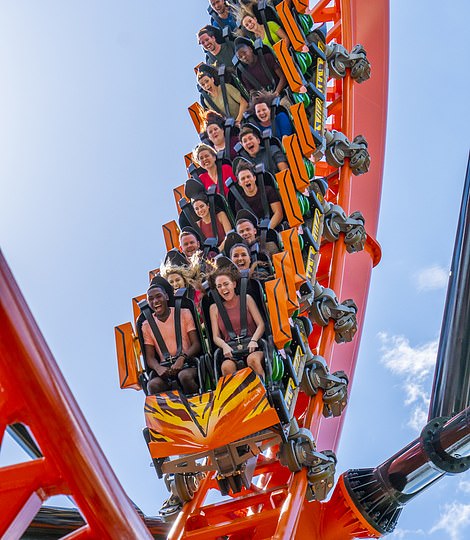 My favourite of the nine rides here is the longest one, Cheetah Hunt. The green track looks like a giant bow being tied, and we dip and dive through figures of eight and side-to-side rolls, lifting out of our seats, feeling zero Gs (that’s weightlessness in coaster speak) and for some reason it makes me laugh uncontrollably and I want to stay on for another round.

We hop on the open back of a truck as we’re driven slowly past gazelles and rhinos. Our guide begins every answer to our queries with: ‘That’s a great question!’

About an hour away from Tampa sits Orlando, which not only has an entertainment park for everyone, but has helpfully grouped them within a few miles of each other. Water babies should head to Aquatica and try the KareKare Curl. 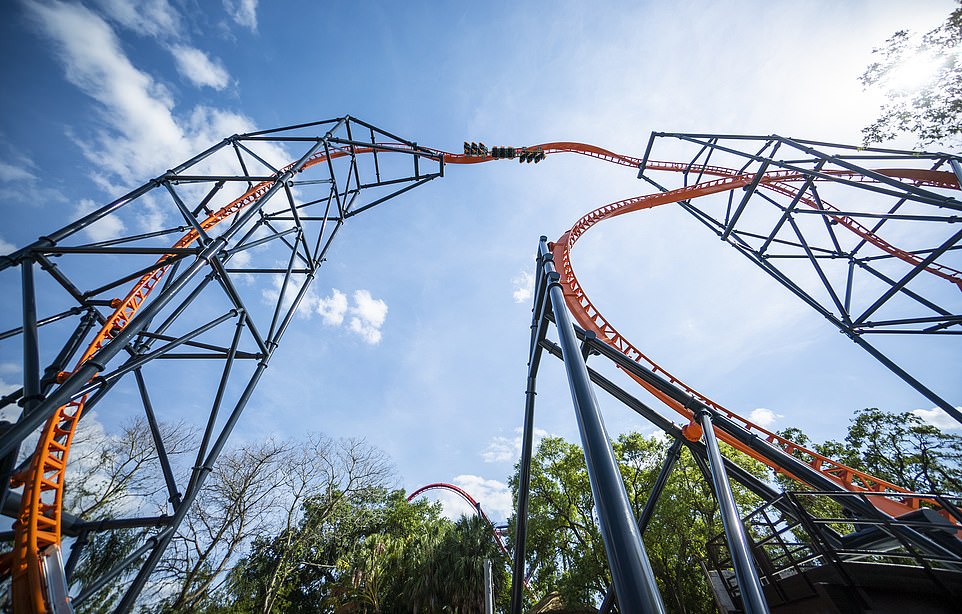 Tigris races riders along more than 1,800 feet of steel track designed to mimic the agility of the world’s largest and most powerful cat – the tiger

It’s a raft like an inner tube which powers out of a tunnel and swooshes right up the sides, like bob-sleighs powering along banked tracks.

The weight limit per person is nearly 18st and yes, they do insist on weighing everyone individually and double-checking the scale, which isn’t great for one’s self esteem.

I prefer the warm wave pool and the circular lazy river, though it’s not that lazy and if you pick your moment wrongly it’s like waiting for a gap onto the M25.

We get closer to the action at Discovery Cove for an underwater walking tour.

Once in the water, a massive 5st astronaut style helmet is placed over our heads to stop us floating up to the surface. 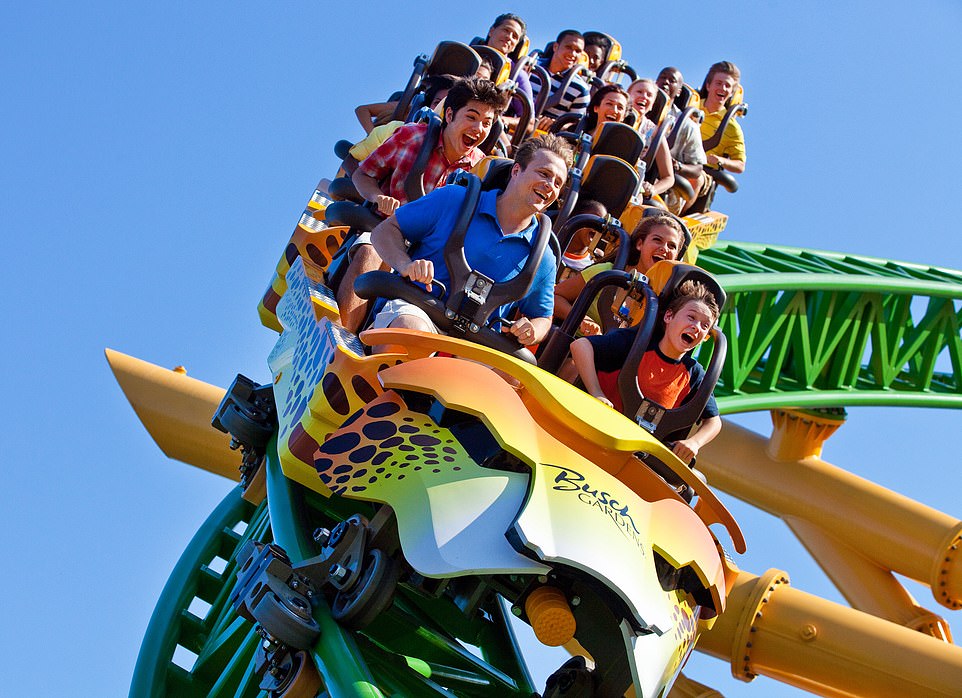 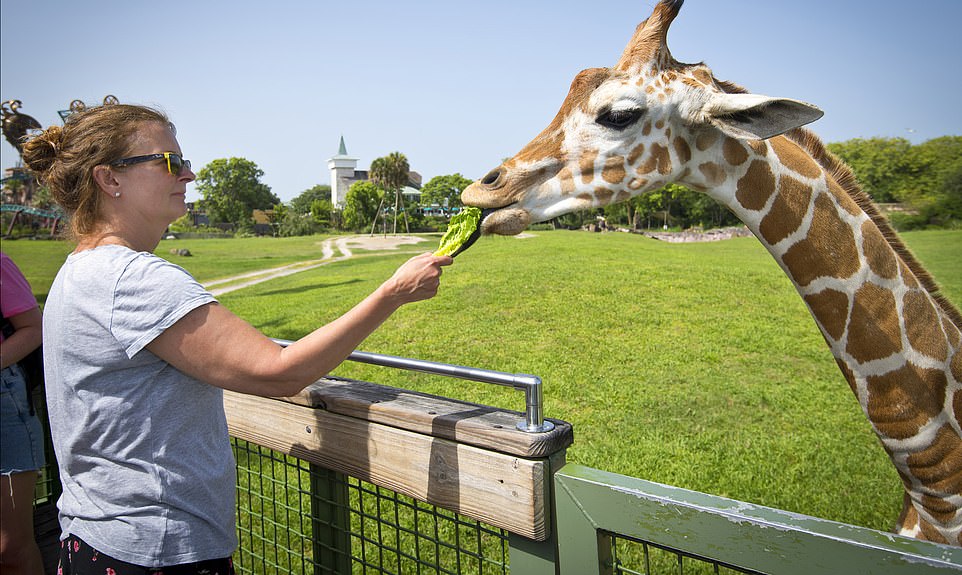 Kate feeds a giraffe at the Serengeti Safari, one of the attractions at Busch Gardens

The fish are all dressed in their finest Mardi Gras costumes, as velvety rays and plump starfish make way for us.

We’re also in the water for the dolphins, though there’s a short delay as the dolphins rostered for this shift take some time to appear.

We stroke their smooth skins, feed them and hold on to the base of their dorsal fins for a short swim. They’re very patient.

Then there’s the 200-acre SeaWorld which must have the fastest, tallest ‘coaster’ in Florida.

The Mako is named after a shark, so fearsome it can leap 30ft in the air, and streak through the water at 60mph. 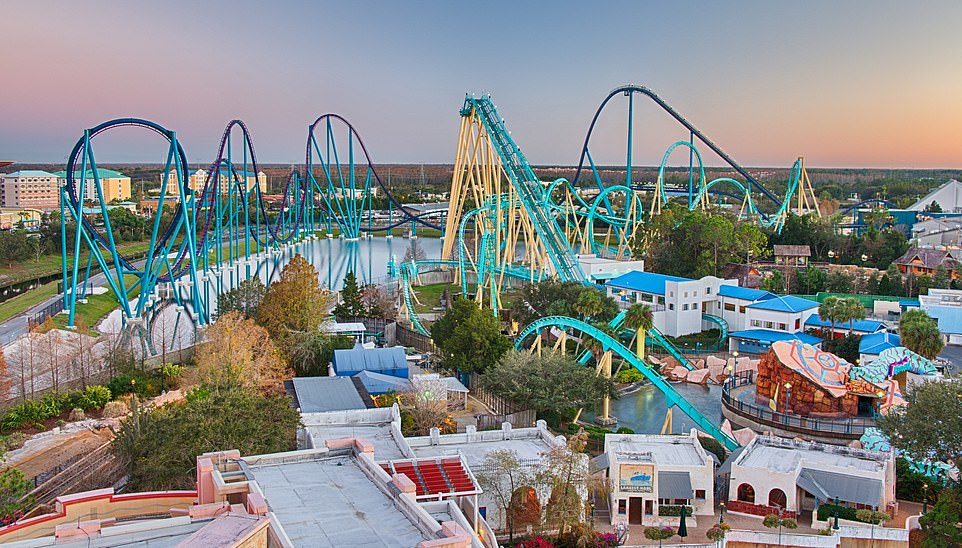 Tallest, fastest: An aerial view of the 200-acre SeaWorld Park with the Mako and Kraken rides

Fast, but not fast enough to catch this coaster as it careens and flashes over dips and dives and turns at 73mph.

The other must-do is the Infinity Falls water ride. A circular raft spins this way and that down white water rapids.

The shows that dolphins, seals and orcas the size of London buses participate in, with their poolside bright blue body-suited trainers, are hugely popular.

For me, the idea of these unknowable mammals performing tricks for treats in an enclosed space for our entertainment feels out of date.

I’d prefer to admire them in their natural habitat behaving as nature intended. So I will stick to the coasters in future.

Kate travelled with SeaWorld Parks, which offers the Discovery Cove Ultimate Package including one day at Discovery Cove and 14 days entry to SeaWorld, Busch Gardens and Aquatica Orlando from £195pp.

Fascinating footage from a trip on the world's highest railway

THESE are the best golf courses in Northern Ireland