Home » Travel » The 20 Best Beaches on the West Coast

California and the Pacific Northwest are home to many iconic and stunning stretches of beach. From the glamour of Malibu to the rugged, rock-strewn shores of Washington and Oregon, there’s plenty to enjoy. West Coast water temperatures are significantly chillier than those in Florida or Texas (some even require donning a wetsuit in midsummer), but what these beaches lack in warmth, they make up for in beauty. We looked to online reviews from beachgoers and local guides, took into account average water temperatures, sights to see, available activities, and overall beauty to bring you the top beaches along the West Coast that are worth a visit this summer.

Related:
The 20 Best Beaches on the East Coast

Coronado Beach has legions of fans and accolades. Not only does this pristine beach stretch for miles, but the sand, which contains the mineral mica, really does sparkle. And then there’s the location right in front of the historic Hotel del Coronado, where presidents have stayed and where Marilyn Monroe filmed scenes for “Some Like It Hot.”

Related:
15 Iconic Movie and TV Beaches You Need to Visit

Cannon Beach is home to the majestic Haystack Rock, one of the Oregon Coast’s most recognizable attractions. Beachgoers can walk to it at low tide. While swimming may not be a popular activity here, long walks and nature exploration certainly are, with vibrant tide pools, diverse wildlife, and resident puffins.

The rough-hewn beauty of the Pacific Coast is on full display at Rialto Beach, with its massive sea stacks just offshore, piles of driftwood scattered across the beach, and Hole-in-the-Wall sea cave arch. The wildlife at this beach is also a treat — otters, whales, and seals are all regular sights.

Related:
14 Budget-Friendly Places for Whale Watching on the West Coast

Pure white sands and welcoming coves are just some of the reasons to love Carmel Beach. This iconic stretch of beach was recognized by National Geographic as one of the best beaches in the world. This central California destination is dog-friendly and a stellar place for surfing. Be sure to take a walk along the scenic bluff.

Famous for its endearing and amusing colony of seals and sea lions, as well as sea caves that can be visited by kayak, La Jolla Cove draws crowds all year. A tiny beach tucked between sandstone cliffs, it is part of the San Diego-La Jolla Underwater Park Ecological Reserve, which means sea life is abundant in the area.

Sometimes referred to as the American Riviera, a nod to its location in one of the most expensive ZIP codes in the country, Butterfly Beach is a palm-lined stretch of sand that sits in front of an iconic Biltmore hotel. The beach is dog-friendly and offers a chance to spot one of the many celebrities who live in Santa Barbara.

Related:
22 Places to Hang Out Where You’re Most Likely to See a Celebrity

A lesser-known gem, Salmon Creek Beach is in Sonoma Coast State Park, home to rugged coastline and quiet coves. The beach is divided by its namesake creek into two sections. North Beach attracts surfers, while South Beach is notable for nearly 2 miles of sand and dunes, which draw picnickers and beachcombers.

Think of this beach as the Coney Island of the West Coast, where it’s known for its boardwalk and amusement park. If you visit, be sure to take a ride on the Giant Dipper roller coaster for a bird’s-eye view of Monterey Bay. In the summer, there are free concerts and movies on the beach.

Carlsbad is home to many stellar beaches, which makes settling on one somewhat difficult. But among the most notable here is South State Beach, which is one of the cleanest and most family-friendly beaches in California. There’s plenty to do at this beach tucked among a string of rugged coastal cliffs, including surfing, hiking, swimming, picnicking, fishing, and even overnight camping.

High sandstone cliffs, picturesque bluffs, and a protected estuary inhabited by birds and small animals are just some of the reasons to visit this stunning beach. There’s also an inviting picnic area on the grassy bluffs. Those who enjoy a walk can check out caves and fossils in the cliffs at the north end of the beach.

Once owned by oil tycoon Edward L. Doheny, the beach was donated for public use in 1931. Today it’s one of the most popular state beaches in California. On the northern end, surfers hold court, and there’s a 5-acre lawn ideal for picnicking. At the opposite end, campsites are available just a few feet from the sand. Don’t miss the visitor center and its aquariums.

Manhattan Beach, in Los Angeles County, is quintessential Southern California — 2 miles of wide sand, a picturesque fishing pier, and posh homes lining the edge. This beach is ideal for those seeking to experience the region’s famous sun-soaked, see-and-be-seen lifestyle. Beach volleyball is practically a religion here, and courts can be found up and down the sand. There’s also a 22-mile bike trail that runs through many neighboring communities.

Huntington City Beach does not disappoint those in search of all things sun and sand. The beach is famous for its surfing contests, volleyball tournaments, and Huntington Beach Pier, where people can fish without a license. A 3.5-mile stretch of beach, it’s also a popular place to rent bicycles or even kites.

Surfers are particularly fond of Westport Beach, in part because it was the location of the annual Clean Water Classic surfing competition for years, but also because it averages more than 300 days a year with waves at least head-high. The beach is also a favorite among those who hunt for fresh clams. Razor clams are abundant, and bringing a bucket and shovel to dig some up will not go unrewarded.

If hunting for seashells or clams seems too ordinary, head to Oregon’s Agate Beach to search for wave-polished agates. There’s a creek that empties onto the beach, creating an ideal place for young children to investigate. At low tide, explore the rocks near the beach’s headland, where there are crabs and other creatures.

At 28 miles long, this beach certainly has a fitting name. The expansive and picturesque beach offers a variety of activities, including horseback riding, volleyball, kite flying, clam digging, and fishing. In Willapa Bay, on the peninsula’s eastern side, visitors can paddle through shallow water in search of wildlife along the rocky beaches.

For those who remember the reality show “Laguna Beach: The Real Orange County,” the beaches in this picturesque, upscale community will be familiar. Crystal Cove is worthy of special notice thanks to its offshore underwater marine park, a top-notch place for snorkeling and scuba diving. Onshore, many tide pools and hiking trails beckon to be explored.

El Matador is one of Malibu’s most visually striking stretches of coastline, with sea caves, enormous rocks and boulders on the sand, and steep cliffs lining the shore and providing outstanding views of the coastline below. The waters are filled with kelp forests, which make the area a feeding place for migrating whales.

For those in search of respite from the often-ubiquitous noise of boats and jet skis, Little Corona del Mar Beach is a small slice of paradise. A boundary keeps both at a distance. Reefs block the beach from excessive waves, creating a welcoming place for swimmers of all ages. The beach is also known for tide pools and marine life, drawing snorkelers and divers.

Rockaway has been attracting vacationers since the 1920s. Some of the highlights at this 7-mile beach include exploring tide pools and spotting whales offshore. It’s also a popular place for photographers looking to capture images of the Twin Rocks offshore. Come nightfall, crowds gather around bonfires under starry skies. 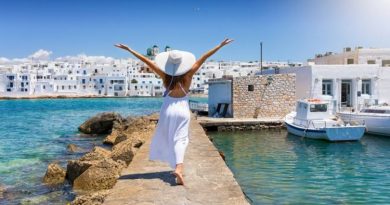 Earth Day 50: How lockdown has cleaned up the world’s most polluted cities