Home » Travel » The 5 Most Exciting London Hotel Openings in 2021 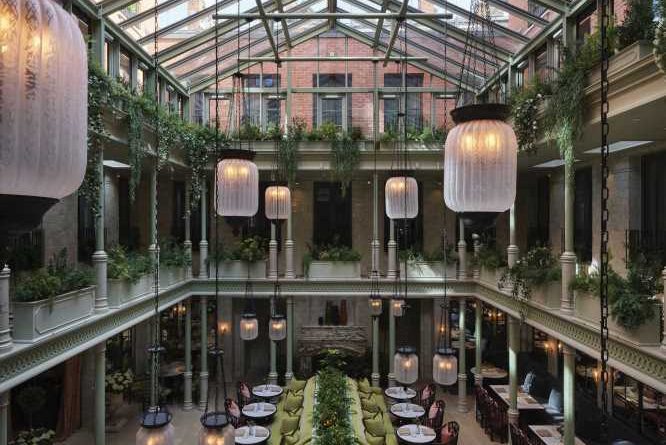 
Photo by Simon Upton The soaring atrium and restaurant at the new NoMad London While the United Kingdom remains off limits for many visitors around the world, a slate of exciting new London hotels have made their debut in the capital, with more to come. Here are a few to bookmark for when borders reopen.

All hotels are open as of May 20, 2021, when hospitality lockdown restrictions lifted.

In London’s Mayfair, Half Moon Street was Oscar Wilde’s social stomping ground. He belonged to a nearby men’s club and set his play The Importance of Being Earnest on the townhouse-lined street. Today, the new 172-room Mayfair Townhouse there has a whimsical and smart vibe—the owners describe it as “Oscar Wilde meets Alice in Wonderland.”

Set across 15 townhouses—7 of which are Grade II listed, with particular architectural significance—the property has shed anything corporate from its former life as a Hilton.

The first thing you see when you walk in is Alfie, the hotel’s sparkly peacock sculpture, encrusted with 26,000 Swarovski crystals. It’s a first feel of the hotel’s celebration of the “dandy lifestyle,” a term that historically meant the pursuit of the finer things in life—and there is a lot of pleasure here, including the brilliant Dandy Bar, where the signature cocktails have names like the Casanova, the Earl of Mayfair, Chic, and Madame Fox.

A mischievous and chic fox is the hotel’s mascot, adorning every room door. And the artwork throughout is the opposite of musty townhouse—contemporary fine art portraits of the fictional Renard (“fox” in French) family by Miss Aniela feel amusing and peculiar, a mash-up of the 19th and 21st centuries.

Some of the rooms, peaceful and deep-hued in blue, green, and gold, have gardens and balconies. Late night cravings can be satisfied with British snacks from the free minibar offerings, like Mr. Filbert’s olives and cheese and onion potato chips from the British Crisp Co. If you’re solo, don’t discount the wonderful entry-level cabin rooms—they’re one of the best small-room offerings in the luxury London market.

The Mayfair Townhouse is a part of Iconic Luxury Hotels, which includes country hotels Chewton Glen in Hampshire and Cliveden in Berkshire. You get just a hint of country life with the Noble Isle bath amenities, which, to me, smell like a sweet British summer day.

Henry’s Townhouse is the other splashy townhouse opening this year, but it’s just one Grade II-listed house in Marylebone—and its seven bedrooms are exclusive-use only. For a family reunion, wedding party, or holiday gathering, this is a great new option in London’s hospitality scene.

Who is Henry? He was Jane Austen’s brother, and he lived in this house for about five years. (Jane did visit him here.) He managed her estate after she died. Today, the narrow townhouse has one staircase going up five floors, a cozy front lounge, a state-of-the-art kitchen and dining room for breakfast, and a “snug,” a slim space to read or enjoy late-night conversation. While the kitchen is perfect for cappuccinos and eggs, it also works equally well for a corporate retreat with big-screen tech.

Each room is Georgian in style and named for a member of Jane Austen’s family—pink-themed Eliza is the most romantic room with a dramatic four-poster bed, while my favorite was James—I loved the chartreuse couch, and it feels slightly more modern.

You can easily become absorbed in the artwork and books, from Jane Austen first editions costing thousands of pounds housed in a glass bookcase, to an antique painting that owner Steven Collins told me he “found for 20 quid” at a market in Nice. Collins and his wife, Jane, an interiors and antiques expert, designed the townhouse with Russell Sage Studio, incorporating their personal art collection and taste.

The secret weapon of the house is Ann, the townhouse manager who lives in an adjacent apartment. Warm, lovely, and efficient, you will wish she ran your entire life, not just your time at Henry’s Townhouse. It feels like a hotel of your very own, thanks to her.

© Photo by Benoit Linero
The Royal Opera Suite has a view of London’s opera house across the street.


Photo by Benoit Linero The Royal Opera Suite has a view of London’s opera house across the street.

New Yorkers will feel familiarity at London’s new outpost of the Roman and Williams–designed NoMad, its first outside the United States. To start, the library is filled with New York books on the shelves.

“It is a conversation between New York City and London,” Sydell Group CEO Andrew Zobler told me. But it’s very London, built in a former police station and Magistrates’ Court, right in the middle of Covent Garden and across the street from the Royal Opera House. That location, in the center of the city’s nightlife, drives the hotel’s offerings.

The Royal Opera Suite, one of the hotel’s 91 rooms, feels fit for an opera star with gold bathtub, rich fabrics, and light streaming in through tall windows.

The NoMad restaurant is set in a soaring atrium filled with greenery and light—it will appear on Instagram feeds everywhere. At New York’s NoMad, the roast chicken has been a famous menu item since it opened in 2012. The London version is a chicken dinner for the whole table, at £70 a person, including starter and dessert.

For a more casual dining option, Side Hustle feels like a pub in style but serves Mexican street food like tacos and tostadas, something sorely missing in London. Coming soon: a late-night cocktail lounge called Common Decency.

Last winter, the new Nobu Hotel London Portman Square—the second Nobu hotel in London after Shoreditch—was open for just a few days before lockdown. But after its reopening several weeks ago, I found myself sitting across from Kate Moss at the hotel’s restaurant. While celebrity culture feels very early aughts, it did lend a bit of welcome glam, the feel of a kickstart to the roaring 20s after months of dreary lockdown.

Celebrities aside, the 249-room hotel, anchored by its enormous signature restaurant, feels very much like a Place To Be, an urban watering hole for cool cocktails in the dimly lit Nobu bar or a morning coffee and the paper in the Lobby Lounge, whether you’re staying or not.

You’ll want to book far in advance for a table at the restaurant—Londoners have filled every prime dinner slot to indulge in the signature dishes like yellowtail jalapeño, crispy rice with spicy tuna, and black cod miso.

Throughout the public spaces, the design is Japanese inspired—sleek, neutral, and calm—but with showstopping elements like a 16-foot kinetic sculpture in the high-ceilinged lobby, mesmerizing as it turns. Interiors were designed by David Collins Studio, a firm specializing in hotels like Gleneagles in Scotland, but also lifestyle spaces like Harrod’s dining hall and the Alexander McQueen flagship store in Paris.

The defining feature of the hotel is the Nobu Pilates studio, the first of its kind from the brand. Led by former Equinox instructor Marsha Lindsay, and with three signature classes, Power, Pure, and Precision, the studio—like the restaurant—feels very Los Angeles-in-London and is already a big hit with Marylebone locals. There is also a large gym and juice bar. Here, you’re just a short walk away from the charming Marylebone high street and one of London’s special smaller museums, the Wallace Collection.

© Courtesy of the Dilly
The Dilly is within walking distance of many of London’s attractions.


Courtesy of the Dilly The Dilly is within walking distance of many of London’s attractions.

The Dilly, previously under Marriott management, has debuted a refurbished look (with more to come) and new name on London’s Piccadilly, walking distance from Piccadilly Circus, Soho, Chinatown, and the theater district to one side, and on the other, shopping emporium Fortnum & Mason, Hatchards (the oldest bookshop in the U.K.), and the Royal Academy of the Arts.

Although I have passed the property countless times, I never realized what an incredible history it has, first operating as a hotel in 1908, in the era of guests coming over on Cunard ships. While many hotels erase history in favor of modernity, I love the slightly creaky floors and the gilded, original ceilings. There is a dance studio—the only one at a London hotel—where guests can take classes like ballroom, two indoor squash courts, the only outdoor terrace on Piccadilly for breakfast, and a greenhouse restaurant for its Peter Rabbit–themed afternoon tea.

I suggest dressing for cocktails in the Oak Lounge before dinner—a welcome feeling after this past year—before dining on upscale Indian at Madhu’s of Mayfair, doing a six-month pop-up residency for now. Of the 283 rooms, the 12 Dilly suites shine, some with views of Parliament and Big Ben.

There are London touches everywhere—partnerships with brands like flower shop Pullbrook & Gould and local perfumery Floris. Guests can hire a bike for £10 a day and take a picnic basket to Hyde Park or St. James’s Park. This is a great choice for families who want to be in the center of London—and for dog owners, as it’s very dog friendly. I am hoping that its grand dame status continues to shine with independent ownership.

>> Next: The Best London Neighborhoods for Every Kind of Traveler

Why You Might Be More Likely to Cry on an Airplane