They say imitation is the sincerest form of flattery, but one guest at Devon Dens – an off-grid sanctuary in the west of the county – went further than copying: she bought the cabin she stayed in and is having it shipped home.

“I guess she enjoyed it here,” says owner Jo Henderson, as she shows me to my (still in situ) home for the night. “It’s relocating at the end of October, but we’ll replace it with one that’s just as lovely.”

My cabin is covetable. Made from sustainable local wood by Jo’s carpenter husband, Ben Ranson (the couple also make huts and wagons for others via their company Barrel Top Wagons), it has a kitchenette, lounge with woodburner and sofabed, dining area and mezzanine-level bedroom. (The new model will be similar, but with more space: sleeping six instead of four, with a separate double bedroom.) Pots on the decked terrace overflow with plants, and the outdoor dining space – towards the stream that flows through the woodland site – has a large wooden table, firepit and barbecue. 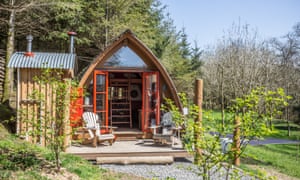 The weather had turned misty as I navigated the winding lanes from Okehampton to the cabins, near Germansweek, and I arrive frazzled from the long drive. Yet the sense of being in a cocoon is immediate: there’s no wifi or phone signal, and with the other cabin at the opposite end of the site, it feels peaceful and private.

Here, I find the sun provides power, toilets are dry, all waste is composted, there are beehives, and a pond and reed beds form part of the natural water filter system. There’s also a polytunnel and raised vegetable beds – guests can help themselves, and what’s ready to pick is chalked on a blackboard (the purple carrots and leafy greens were delicious). Local produce can be ordered in advance, too: from organic cider to milk from the nearby farm. 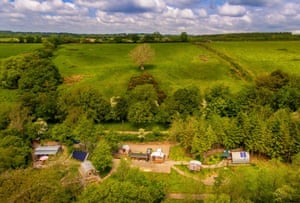 “We wanted to do something as eco as possible,” says Jo, a former restaurateur, who spent a year working on an organic farm in Greece with Ben before returning to the UK and buying the plot. “It’s a taste of off-grid living and people often pick up ideas of simple things they can do to lead a greener life.”

The cabins have shelves of nature books, magazines and board games (extra sets are swapped in when guests arrive), and while Covid restrictions mean the on-site sauna is closed, massages can still be booked. There’s also a new app with loads of local information, suggested walks and a self-check-in option.

It’s such a restful setting that days could easily be spent lazing in the hammock or reading by the fire. However, there are good walks from the gate and I spend hours roaming pretty lanes, walking across fields and through woods, and picnicking by Roadford reservoir (popular with birdwatchers). 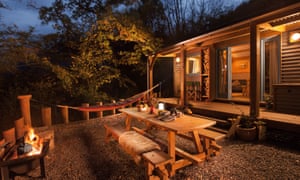 While much of Devon was heaving over the summer, this pocket feels quiet, despite Dartmoor being on the doorstep and some of north Cornwall’s best beaches just a 40-minute drive away. In the early evening I meet Jo for a dip in the moor’s Meldon Quarry. Its series of pools are a favourite with outdoor swimmers – but there’s (thankfully) no one around to hear me squeal at the cold water.

“We love this area,” says Jo. “It’s not chi-chi like south Devon, and is less crowded, but has easy access to many beautiful spots – from Lydford Gorge to the Pegasus Trail, a cycling and walking trail.”

My plans take me coastward towards Bude, and the resort is an immediate contrast to the oasis of the dens. While lovely in summer, they would make a cosy winter bolthole, too, I think … wondering when I might return. I’m not surprised that some guests book their next stay before their holiday has ended. If you can’t buy a cabin yourself, I guess it’s the next best thing.

• Accommodation was provided by devondens.co.uk, which has two cabins sleeping up to six from £125 a night