Home » Travel » The mysterious triangle symbol on flights – what does it mean if you’re seated beside it? 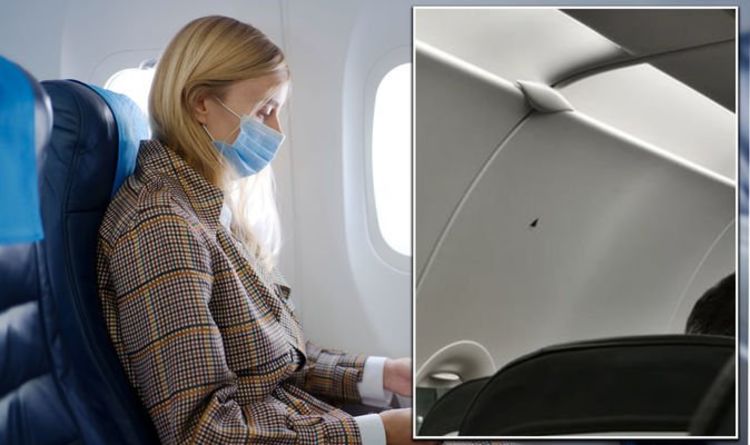 When travelling on an aeroplane, you might have noticed a small black triangle symbol situated on the wall of the cabin. Typically, this symbol is in the form of a sticker, located just above the window.

They can be found on most passenger aeroplanes.

Most often, they are located at the end of a row of seats.

However, the placement of this sticker could impact your journey in the event of an emergency if you are seated beside it onboard some types of aircraft.

What does the triangle symbol mean?

Although the triangle symbol is small, it plays a very important role during the flight.

While windows might usually be used as a portal to stunning views outside, for cabin crew onboard, they are a useful way of checking if something is wrong – particularly when located above the wings.

Next time you board a flight, you may notice these triangles are usually located above the wings.

According to retired aerospace engineer Lee Ballentine, they are particularly important.

Posting to the question and answer forum Quora, he said: “The black triangle marks the location of what has been called ‘William Shatner’s Seat’, the seat with the clearest view of the wing.

“This is the place inside the aeroplane from which you can get the best visual check for ice or other problems.

“The Shatner reference is to one of the strangest Twilight Zone episodes, Nightmare at 20,000 Feet, which first aired on October 11, 1963.

“In it, Shatner’s character sees a gremlin on the wing of the plane he’s a passenger on.”

From this position, the crew can have a look out of the window at the wings if they are concerned, without causing too much dismay to passengers.

According to Business Insider: “If flight crew need to check the wings, these triangles let them know the best vantage points for the slats and flaps outside.

“The markings are especially helpful in wintery conditions to make sure the wings are properly de-iced.”

In some cases, passengers seated in these rows might also be sat beside an over-wing emergency exit.

Typically, in the event of an emergency, passengers in these rows would be required to open the emergency exit doors.

Flight attendants are required by law to brief passengers on what they may have to do in the unlikely event of an emergency.

The Points Guy UK adds: “Technically, if a flight attendant deems you unfit to operate the emergency exit, you are required by law to forfeit your seat in the exit row.

“The degree to which those restrictions are enforced is entirely up to the flight crew.”

Which Tropical Location Has the Best Beaches, Bluest Water and Most Amazing Adventures for Your Dollar?