Home » Travel » The spectator who caused an enormous crash at the Tour de France could face a year in prison and an $18,000 fine 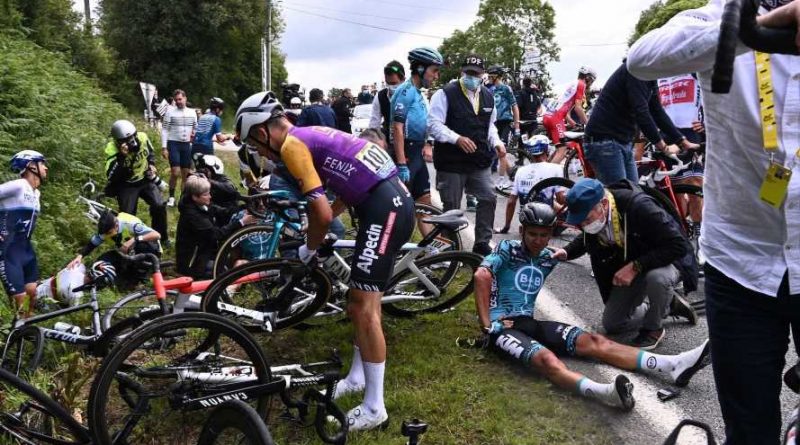 The spectator who caused a huge crash at the Tour de France on Saturday could face a fine of almost $18,000 and a year in prison if a rider injured in the crash decides to press charges, according to French sports newspaper L’Equipe.

The incident took place in the northwestern French region of Brest on the first day of the 3,383 kilometer race.

The fan caused the crash when she turned her back to the riders to hold up a sign reading “ALLEZ OPI-OMI!,” or “GO GRANDPA, GRANDMA,” if translated to English.

As she did so, German rider Tony Martin of the Jumbo-Visma team collided with the sign, causing him to fall. His fall caused a chain reaction as dozens of cyclists fell to the ground.

Dozens of riders were injured, and one, Jasha Sütterlin of Team DSM, had to abandon the race because of his injuries.

Among those injured was four-time Tour de France winner Chris Froome, who is racing in his first Tour since a horrific crash in June 2019.

After the crash Sütterlin was taken to hospital having suffered a severe contusion to his right wrist. As a result of the injury, he was forced to abandon the race.

L’Equipe reports that the public prosecutor for the Finistère region has opened an investigation into the incident and that the woman, whose identity is not yet known, is being investigated for a deliberate violation of safety regulations and for causing “unintentional injuries with incapacity not exceeding three months.”

An organizer of the Tour de France said that the woman will be sued when she is identified.

The Finistère gendarmerie, which polices the region of France where the crash occurred, has called for witnesses to come forward

If Sütterlin, the main victim of the fall, decides to file a complaint and escalate the case to a criminal claim then the potential fine could increase to $17,900 (€15,000), the newspaper added.

If the strictest punishment available were to be passed down, the woman could face up to a year in prison, L’Equipe says.

After the collision, the woman is reported to have fled the scene and the search for her identity and whereabouts remains ongoing.

Vintage images reveal what skiing was like over 80 years ago

Ask the cruise director: What are the biggest myths about cruising?