Find your karma – with llamas! The Surrey pub that rents out its herd of goofy South American animals for joyful treks through quintessential English countryside

A happy llama makes a soft, burring sound, like a cross between a bee’s buzz and a pigeon’s coo.

So Goji – one of a herd of eight who reside at the 16th Century Merry Harriers Inn, one of England’s oldest pubs – is clearly a very happy llama indeed.

Burring all the while, Goji saunters down the country lanes around Hambledon village in Surrey, pausing often to munch on the new leaves of a rowan tree. 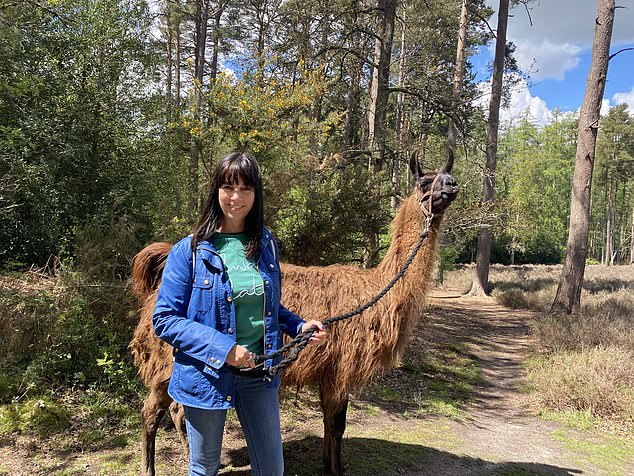 Gentle pace: Kate out trekking with Goji the llama from the Merry Harriers

There’s something wonderfully relaxing about trekking with these goofy animals. Whether it’s taking the reins of affectionate Toffee (who may try to give you a kiss) or laidback Goji (who loves to roll in sandy soil), a stroll around this quintessential English idyll in the folds of the Surrey Hills, with its village shop and immaculate cricket green, feels therapeutic.

The llama’s pace is gentle, making a three-hour llama trek the perfect multi-generational activity (from eight years upwards). As the animals like to snack frequently on whatever takes their fancy – ferns, nettles, brambles, even holly – there’s ample time to soak up your surroundings.

Head out from The Merry Harriers and you’ll pass through pretty wildflower pastures and wooded country lanes, stride into fields awash with red clover and daisies in spring, and meander across vast commons brightened by purple heather come July and August.

A summer-evening trek is fabulous, but you can choose any time of day – and then, if the weather is fine, a picnic is served at the top of Hambledon Common with far-reaching views over the South Downs. 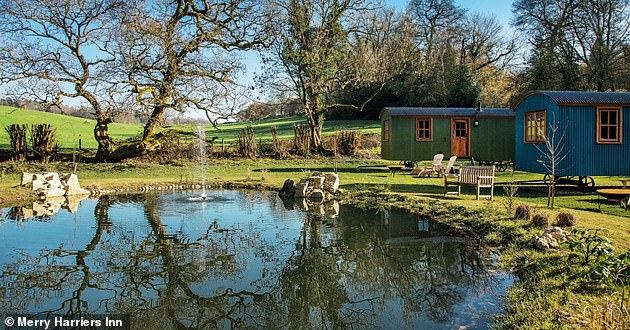 If you’re staying overnight at the inn, you can dine outside your Shepherd Hut (there are five stylish, cosy huts complete with log-burners inside and fire pits outside), next to a pretty pond in a field opposite.

Young llamas are heart-meltingly adorable, and you can now catch sight of five recent additions, aged between seven and nine months. Ask Carla, the resident llama-handler, if you can help with their feed. You’ll most likely find Goji, Louis, Diesel, Champagne and the other older llamas nuzzling noses with the youngsters through the gate – their gentle way of saying ‘Welcome to the herd’. And just listen to the youngsters’ soft burr.

Treks cost from £60 per adult, £34 per child. B&B in a Shepherd Hut costs from £195 per night, other rooms from £140. For llama-trekking packages, see merryharriers.com.