Home » Travel » The villa of my dreams – in Marrakech

The villa of my dreams! You’ll want for nothing at this serene spot on the outskirts of manic Marrakech

Villa holidays in France, Italy, Spain – even Turkey in happier times – have a familiar ring about them. But Morocco?

Strangely, not, despite this bewitching country being little more than three hours away and where even in December you can eat outside without needing a jacket.

Which is why waking up at Villa Ezzahra on the plush outskirts of Marrakech is something of a revelation. 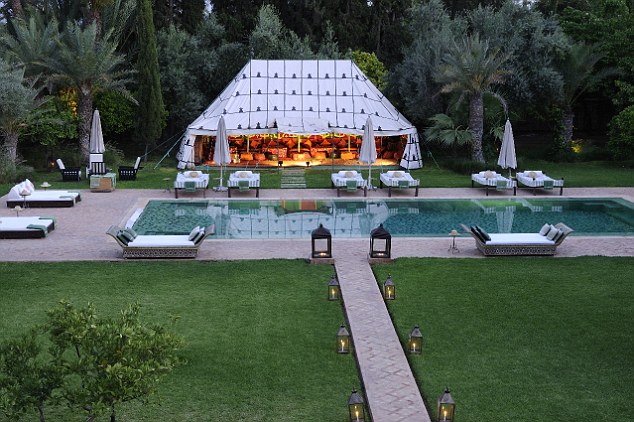 Relax: The pool at Villa Ezzahra and Berber tent filled with rugs, sofas, cushions and pouffes

The birdsong is sublime, the air soft and forgiving, and from my balcony I look out across to a swimming pool and, beyond that, a Berber tent filled with rugs, sofas, cushions and pouffes.

Scattered about the garden are orange trees, roses, palms, immaculate lawns s and vivid banks of bougainvillea. It’s just gone 8am and members of staff are sweeping up leaves that have fallen overnight.

What makes it especially captivating is knowing 15 minutes’ away is Marrakech’s manic medina – a glorious juxtaposition in a stable country with a much-loved king who has a genuine affection for the city and has done a lot to improve life for tourists and residents.

You still get hassled, but nothing like as much as ten years ago and the souk seems better organised, less intimidating. ‘Looky my shoppy, Prince Charles,’ says one trader. ‘Genuine fakes,’ says another. 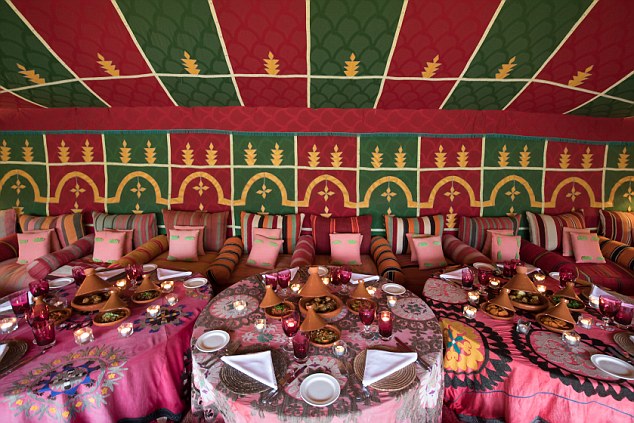 Dining in: Cooks prepare a menu of seasonal Moroccan dishes alongside European options

How they all survive is hard to fathom, but this is the free market in all its improbable glory, a bizarre bazaar unlike anywhere else in the world.

Back at Villa Ezzahra, the king pin is an engaging and sprightly 78 -year-old Englishman called Brian Callaghan, who bought the plot in 1999 and set about creating this wonderful retreat.

He flits between Gibraltar and Morocco, and if you know any thing about chess, you will know Brian. He is the founder and driving force behind the Gibraltar Chess Festival, for which he was awarded an OBE in 2012.

The villa can sleep 14 and there are two further houses next door, with two and three bedrooms respectively, each with their own pools. Villa Ezzahra has a padel tennis court (a game that falls between proper tennis and ping pong, and is catching on fast throughout Europe), billiards table, spa and a number of cosy sitting rooms with fires. 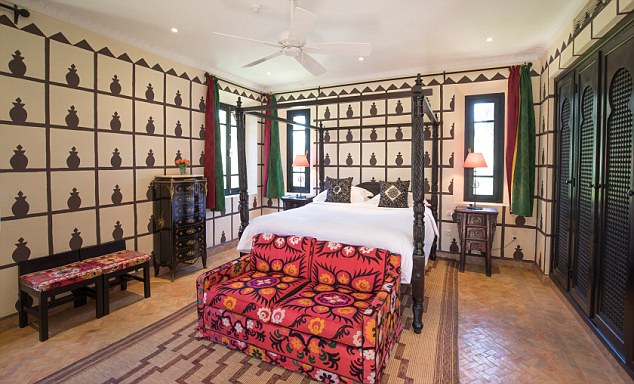 Dreamy: There are seven bedrooms, each with an en-suite, dressing room and private terrace

‘Some people never leave the place for a whole week,’ says Brian. Which is understandable – but tragic.

Not least because a decade after Yves Saint Laurent’s death a museum in his honour has opened a few miles away, next to the Jardin Majorelle, which he and his partner Pierre Berge rescued from demolition and then used as a holiday home.

‘Good clothing is a passport to happiness,’ said YSL. I’m not sure about that, but looking at 200 of his outfits on display, including the iconic Le Smoking tuxedo, is a fine introduction to his winning ways.

Then there are the Atlas Mountains standing in the hazy distance – snow -capped in winter – with a ‘come and get me’ air about them. 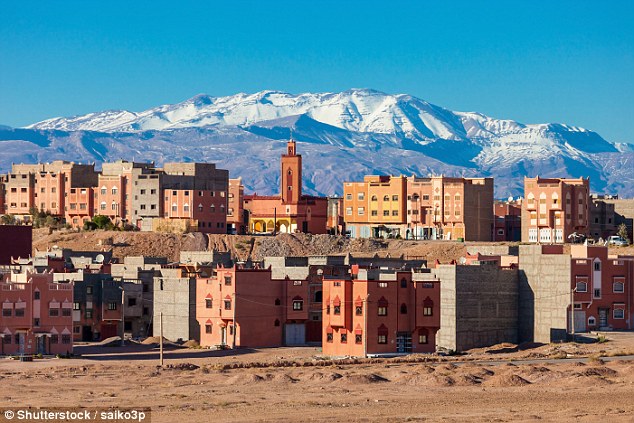 On a high: The Atlas Mountains that loom over Marrakech can be explored on a day-trip

And you should. Or at least you should plan an hour or two’s walk on the baked red soil of the foothills and then reward your self with a late lunch at one of the inviting kasbahs.

We did just that in the thrilling Ourika Valley, ending up at Bab Ourika, which is also owned by a Briton with itchy feet, Stephen Skinner, who proves that when it comes to Morocco, an English man’s home is his kasbah.

The taxi ride back to Marrakech lasts about an hour – and the first 20 minutes takes you through tiny Berber villages where shoeless children play in the street, while the women wash clothes communally.

It’s dark when we return to Villa Ezzahra. Lanterns are lit, the moon is out, wine bottles are opened, lamb tagine is about to be served. This is a villa thriller like no other.

Peru to Allow Flights From These U.S. Cities as Machu Picchu Reopens

What should I do if I have a holiday booked to France? Q&A