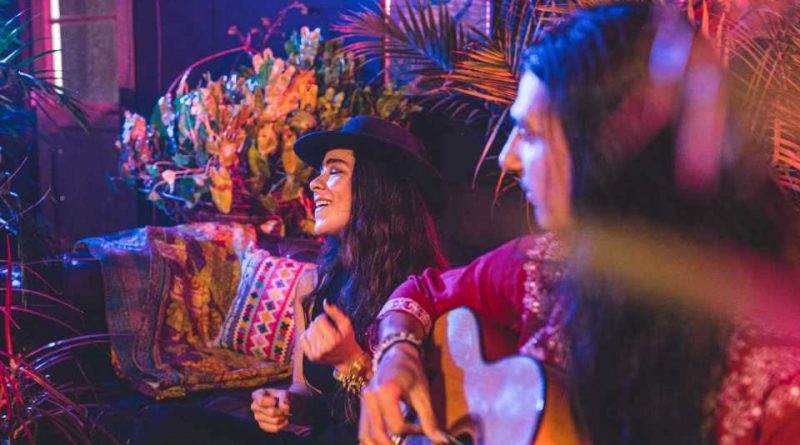 For much of the past year, I found myself in a music rut, particularly when it came to listening to music from outside of the U.S. While I’ve found comfort in my son records from Cuba and dance breaks in my apartment to Afrobeat hits, when vaccine rollout began and the world started to open up, I found myself itching for newness. I no longer wanted to be transported to past trips, but to sink my teeth into new places and cultures.

It was fate when I stumbled upon the Tigre Sounds Instagram. After following the trail of a Mayra Andrade video on my feed, in which she performs her catchy “Tan Kalakatan” in Portuguese, I landed on the brand’s page. The feed was filled with videos from every corner of the world, with artists singing in countless languages, perched on patios in Morocco, and fervently dancing in open fields in Colombia. Posts linked to stories on Tigre Sounds’ website, with titles like, “Made in France: Five Artists We Can’t Stop Listening To,” or “What People Are Actually Listening to in Jamaica Right Now.” I clicked rapidly, chicken-scratching artists’ names onto my bedside notepad to later check out on Spotify.

That discovery—and excitement—is exactly what founder Isabella Acker was hoping for when she launched Tigre Sounds last June in the midst of the pandemic. “On a high level, we’re a music platform that is really about exploring global sounds beyond what makes it into the mainstream U.S. market,” Miami-based Acker says. The bilingual curator, who was born in Atlanta to Chilean parents, uses the words “building bridges” often, to describe the various elements of the brand, which extends far beyond just the social and web content I initially saw. Tigre Sounds is also a consulting agency for industry players like Sony Music, and produces live original recordings and record release events for artists—all of which are focused on the same goal: helping American listeners find new music from around the world that they might not otherwise encounter.

Acker runs the show, with support from writers in places like Paris and Buenos Aires. To find the music she and her team share, Acker is constantly trawling NPR’s channels (she’s an avid fan of the Tiny Desk series), digging into her Spotify Discover playlist, and regularly communicating with her network around the world. In short, you might not have a friend in Accra or Tokyo, but through Acker, you’ve at least got a connection to one. “[Right now] you have more abilities to listen to things, but unless you go [to a destination], unless you have a friend in the know, it’s hard to tap in,” says Acker.

It’s not just about spitting artists’ names out either. Which is, ultimately, what differentiates Tigre Sounds from the many playlists you might find online. Acker wants Tigre Sounds to bring listeners into the fold of the scenes she’s featuring, sharing information about the place the music is coming from, and why its existence matters—beyond the fact that something just sounds good, which ultimately always translates. “It’s about giving some context to what would feel very overwhelming when it comes to world music,” says Acker, who says that she prefers the word “global sounds” to the debated “world music” term. In sum, Tigre Sounds won’t just give you the name of a DJ out of Quito, but will also tell you about Ecuador’s rising Indigenous-led electronic scene—and give you leads on how to plug into it.

If you’re curious, tapping in is easy: Follow @tigresounds on Instagram. Read Acker’s artist roundups on tigresounds.com. Listen to the sounds you like on Spotify, or wherever you get your music. Let the algorithms recalibrate so that, maybe, those actions will pull more music from around the world into your various feeds. And keep an eye out for a growing range of playlists on Tigre Sounds’s Spotify—a Middle Eastern collection titled “Habibi” is coming soon, and she teases that the Major Lazer documentary “Chasing the Sound” has gotten the team excited about up-and-coming artists in Nigeria.

As the world opens up, Acker is excited to keep sharing through Tigre Sounds and says there may be live events for the public down the line. Regardless, she plans to keep sharing great music she knows people will love. “There’s a deep curiosity,” Acker says. “And I really feel like we’re just scratching the surface.”