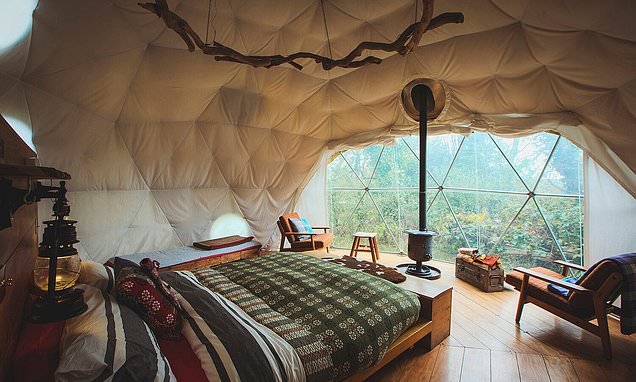 A Welsh pitch-me-up: Bell tents, cabins, domes – why this rugged retreat is just the tonic we all need

Amid hardy grazing sheep, seals peeping fleetingly from the ocean and a lonely whitewashed church, a fierce wind whips up mighty Atlantic waves.

Our feet are the first to imprint the sand since the tide subsided, and the sea flashes mackerel-silver each time the sun pokes out of the thick cloud above.

We’re on Mwnt beach, a sandy cove with Caribbean-blue waters on the edge of the castle-topped town of Cardigan in West Wales. 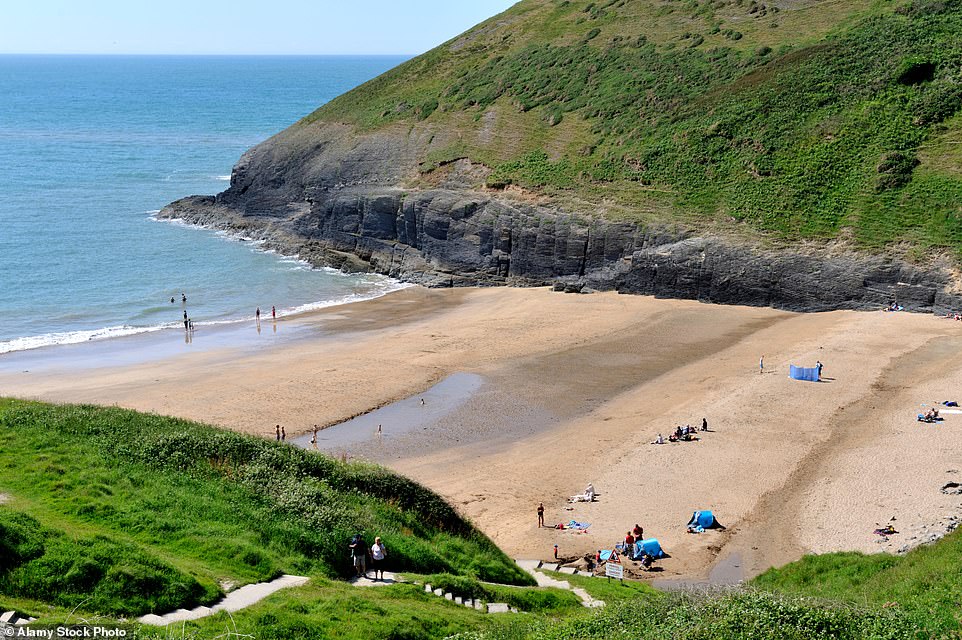 Coastal delight: Mwnt beach is located on the edge of the castle-topped town of Cardigan in West Wales

It’s rugged and remote, to say the least — we’re a two-hour drive from Cardiff, five from London. The nearest railway station is 50 minutes away.

This stretch of coast has long been a stronghold of Welsh culture and language — the first Eisteddfod (annual Welsh language festival) was held here.

But its remoteness has served another purpose this year; Ceredigion, the county in which Cardigan sits, has some of the fewest coronavirus cases in the UK.

Once at risk of becoming another neglected seaside town, Cardigan (population 4,000) has seen change in recent years; brightly coloured boutique shops have sprung up on the cobbled streets, alongside artisan bakeries with beautifully Welsh names such as Crwst (crust) and Bara Menyn (bread and butter).

The castle, built by doughty locals defending Ceredigion from the Normans 900 years ago, has been revived after a £12 million restoration project.

Much of the change is down to the city escapees who now call the town home, including the couple behind the DO Lectures and Hiut jeans (which counts Meghan Markle among its fans), and Sian and James, the owners of our base for the weekend: Fforest Farm retreat.

Sian, a textile designer and former local, and James, an architect, moved from Shoreditch with their four sons in 2004 and have since set up a number of businesses in the town, including a pizza restaurant and a hotel, due to open this summer.

We arrive at Fforest, a ten-minute drive from the town centre, in a biblical rain storm. The fairylights strung on the trees twinkle enticingly as we make our way down one of the several muddy lanes to our Onsen Dome. 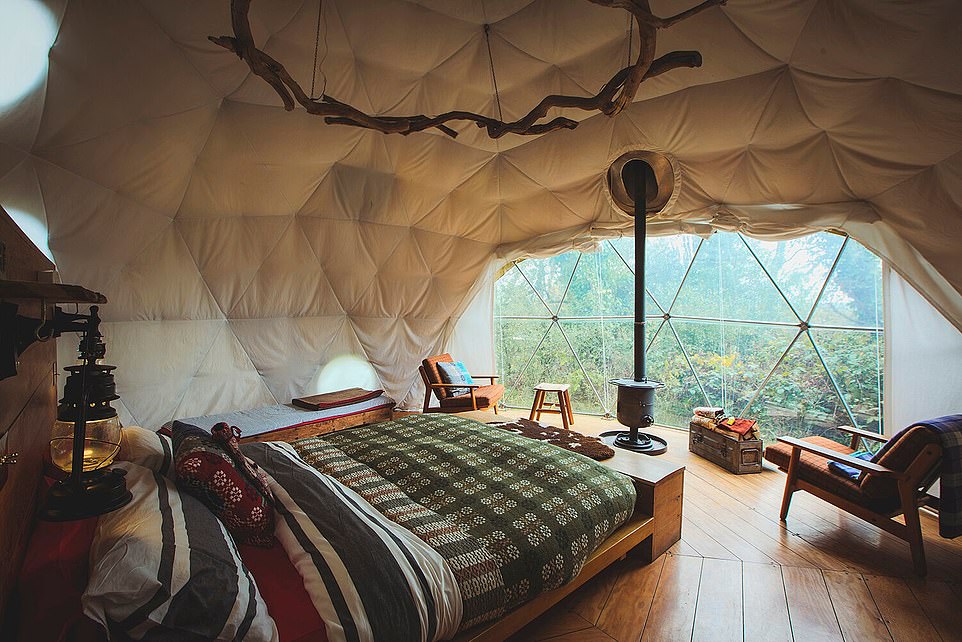 An Onsen Dome at Fforest Farm in Cardigan, West Wales, which Harriet Sime described as being ‘wonderfully dressed’

It’s cold and miserable but our mood instantly lifts when we step inside the canvas and plastic dome; wildflowers sit in enamel cups, a driftwood chandelier hangs above the king-size bed, Welsh blankets hang off the armchairs and a sheepskin rug is flopped on the wooden trunk.

There’s a woodburning stove at the centre, with piles of chopped wood to its side, so we get to work on it straight away.

Sian and James’s artistic backgrounds have lent themselves beautifully to Fforest; the robust, wonderfully dressed dome links to a cedar wood and stone pod with an en suite and well-equipped kitchen.

We open the pod’s chunky wooden door and find decking with an outdoor kitchen and Japanese-style bathhouse featuring a shower and cast concrete onsen tub (hence the Onsen Dome name). 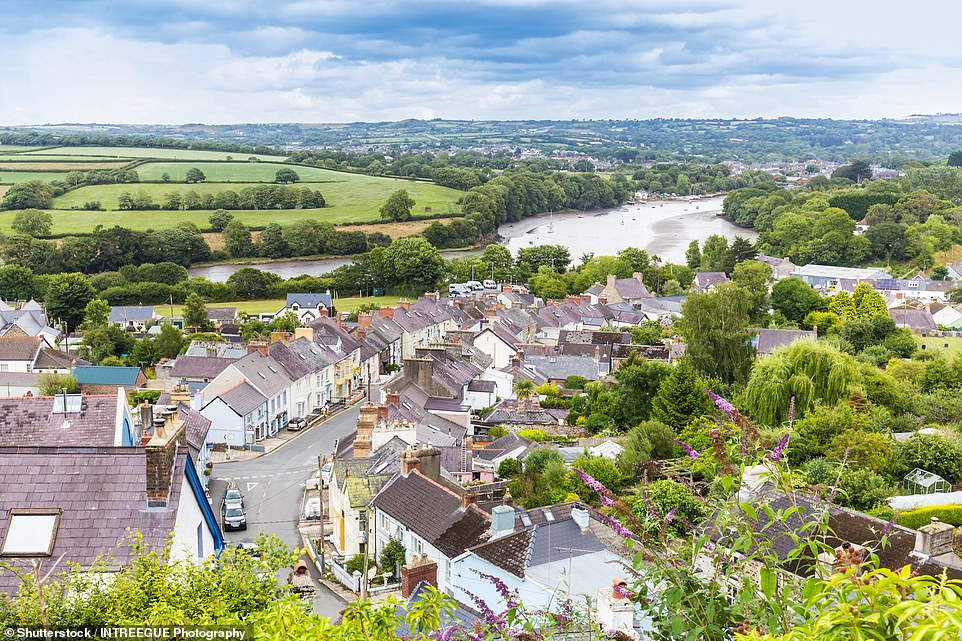 Once at risk of becoming another neglected seaside town, Cardigan (population 4,000) has seen change in recent years

Two nights in an Onsen Dome from £330 (coldatnight.co.uk). For more information go to visitcardigan.com.

The water in the tub, big enough for two, is kept at a constant 40c, so we jump in and watch the icy air dancing on the water as rain batters down on the corrugated plastic roof above.

Guests have the run of Fforest’s 200 acres of woodland and wild meadows, sandwiched between the River Teifi and a nature reserve. As well as the domes, there are bell tents, cabins, crog lofts and a restored Georgian farmhouse. Best for multi-generational families are the Garden and Hill Shacs — wooden huts with three or four bedrooms and a front deck with an L-shaped sofa and dining table.

There’s also a restaurant, small shop and a tiny 200-year-old stone pub serving locally produced beers and gins (all closed during our visit due to Covid restrictions).

We wake early the next morning to birdsong and soft sunlight seeping through the blinds of the dome. We roll them up, stoke the fire and watch the ice on the plastic cover melt away as the sky turns pastel pink.

It’s the first time we get a true idea of where we are; rolling hills and lofty trees lie ahead and there’s not a house nor human in sight.

During a walk down to the river, we discover a cedar barrel sauna among the trees, with a wood burner at its centre. We gather twigs and get it going with some chopped wood left outside before continuing on with our quest to find the water.

Smoke is chugging out of the sauna’s chimney when we return, cheeks ruby red, so we strip off, jump in and watch the birds investigating the trees and rabbits hopping across the flower fields. It’s wild, real and exactly what our nature-starved, London bones have craved after months indoors.

All too soon, we discover that this part of Wales may be hard to get to, but it’s even harder to leave.

The Best Bargain Hotel in the U.S. Costs Only $67 a Night

Watch: Girl’s incredible rescue by ferry after being swept out to sea on inflatable unicorn