Britons across the county have spoken out following phone calls from scam artists posing as Thomas Cook’s customer service team. The news comes just a week after the 178-year-old travel agent announced it was going into immediate administration following an inability to secure £200m of funds. With a reported 450,000 Britons now facing cancelled holiday plans, refunds are being issued. However, sneaky fraudsters have jumped on the back of the situation, hoping to benefit lucratively from unsuspecting holidaymakers. 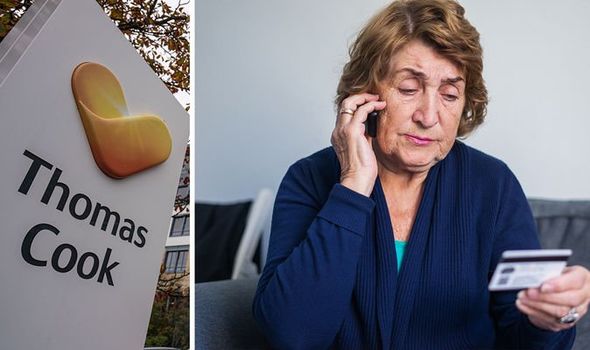 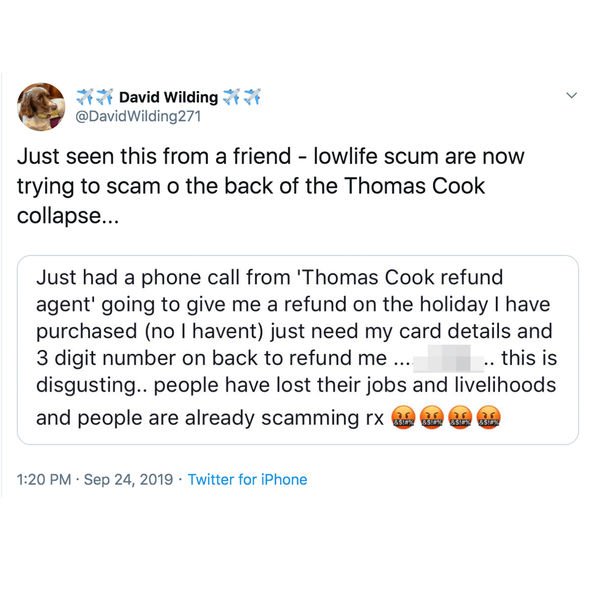 It’s absolutely disgusting that could happen at this time

The con is reported to be a mere process of elimination by cold calling as many people as possible regarding a refund for their Thomas Cook holiday.

The hope is that scammers will eventually come across a tourist awaiting a refund, and then target them for personal details and banking information.

West Yorkshire police released a statement confirming they had received several reports of the scam.

They said: “We are seeing an increase in calls regarding a scam involving the latest Thomas Cook Collapse.

“Scammers are targeting people who were victims of the collapse by ringing up claiming to be from Thomas Cook and trying to arrange a refund for their holiday. The scammer then asks for your long card number and the three digit security number from the back.”

Meanwhile police in Nottinghamshire also received a flurry of reports from local residents, according to the Nottingham Post.

Secretary of State for Transport Grant Shapps confirmed the existence of fraudulent activity. He urged Britons to “be on the lookout” for anything suspicious. He said: “I was made aware of this yesterday. It’s absolutely disgusting that could happen at this time.”

Many targeted people took to social media to voice their anger about the situation.

One Twitter user wrote: “Just had a phonecall from ‘Thomas Cook refund agent’ going to give me a refund on the holiday I have purchased (no I haven’t) just need my card details and three digit number on the back to refund me…this is disgusting…people have lost their jobs and livelihoods and people are already scamming.”

Further confusion has arisen following a series of text messages being sent out by banks.

Often told not to respond to communication with banks via text message, customers assumed the move to be false.

Both Natwest and Halifax responded to confused customers over Twitter, confirming that the messages were legitimate and a move to inform users.

However, both banks suggested the best way to ensure safety is to communicate directly with your bank to double check. 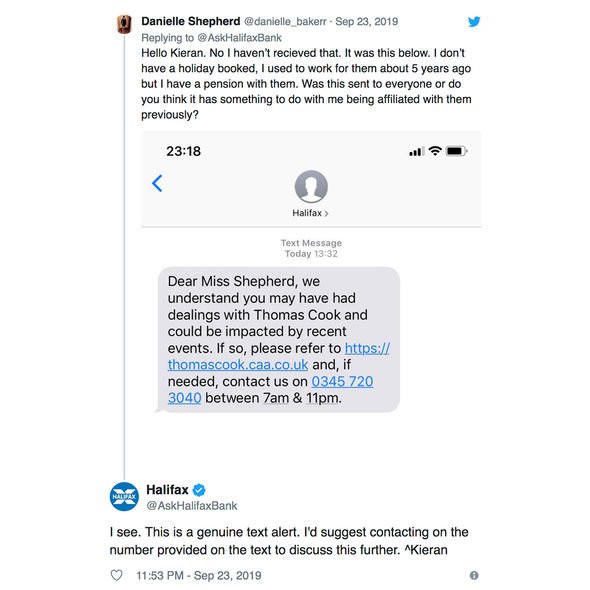 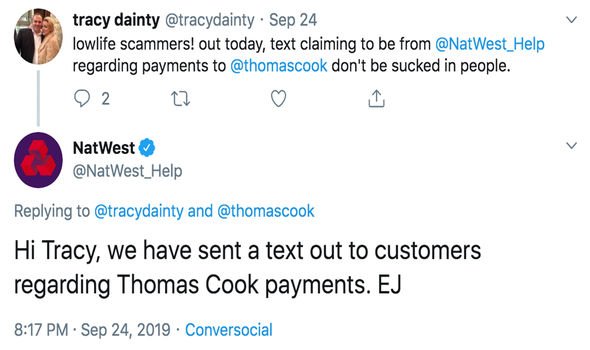 Mike Haley, Chief Executive Officer of Cifas, said: “Scammers are quick to react to opportunities such as the collapse of Thomas Cook, and we’ve already seen reports that they are looking to take advantage of affected holiday makers.

‘If you did book a holiday with Thomas Cook, be cautious if you receive unsolicited calls or emails from companies suggesting that you rebook your holiday through them, or offering you a holiday that’s much cheaper than it should be. Remember never to give bank details or personal information such as passwords or PINs, or to transfer money quickly – especially if you are being put under pressure to do so.” 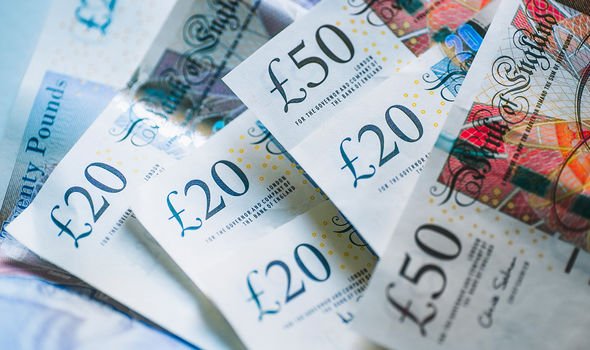 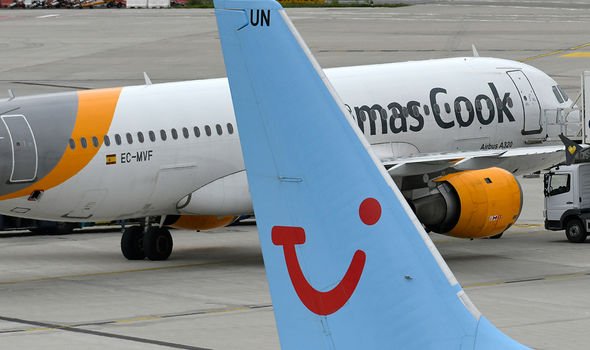 Adam French, Which? Consumer Rights Expert, added: “We’ve heard worrying stories of criminals trying to scam people affected by the collapse of Thomas Cook, so while the messages being sent by some banks might be well-meaning, this flawed approach will only be adding to the confusion customers are facing.

“Our advice is to ignore unsolicited calls and texts and avoid sharing your card or bank details. Anyone looking to claim back the cost of their flight through their debit or credit card provider should contact their bank directly themselves.”

Money Saving Expert Martin Lewis also offered some advice for unlucky Britons who may fall into the trap.

He emphasised the importance of going through “official channels” and talking to the “official people” rather than giving anything to people calling.

He also suggested “spelling mistakes” are a very easy way to identify a phishing email.

Voice-activated technology could make booking an easyJet flight much easier