Tourists visiting Venice may be banned from sitting on the ground, in a bid to rid the city of ‘boorish’ visitors.

Authorities in the Italian holiday hot spot are proposing fining people between 50 and 500 euros (£44 and £443) if they are caught sitting or lying on the floor.

But some residents groups have hit back at the proposal saying there are so many rules in Venice now that they’re impossible to police. 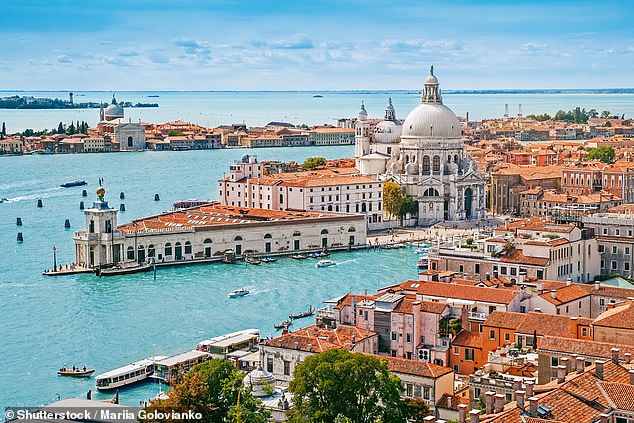 The Italian city of Venice, where tourists may soon be banned from sitting or lying on the ground

Sitting down on the steps of monuments and other buildings is already banned in the area around St Mark’s Square.

The new proposal, put forward by mayor Luigi Brugnaro, would extend the law and would come into force next month if it’s voted in at a council meeting.

But Marco Gasparinetti, who leads the residents’ group Gruppo Aprile 25, told the Guardian: ‘There is such a long list of things that are forbidden in Venice there is nothing left that you can do.

‘They would need to hire an extra 5,000 officers to properly enforce everything.’

Each summer a group of wardens, named the ‘angels of decorum’, roam Venice, tackling tourist behaviour they find uncouth.

This includes eating in the street, being drunk and dipping toes or swimming in the city’s famous canals.

The proposed ban comes after visitor-only routes to popular landmarks were introduced earlier this year ahead of a holiday weekend to keep tourists away from the locals.

They had long complained about excessive crowds – and the measure was also designed to help protect the city’s quaint alleyways and thoroughfares.

The visitor-only routes were put in place for tourists heading to St Mark’s Square and the Rialto Bridge.

And last year Venice banned the opening of new hotels and fast food restaurants in a bid to cap the number of tourists swarming through its streets.

Florence, too, has been policing its image fairly heavily – it has introduced fines of up to £450 for eating in the street. 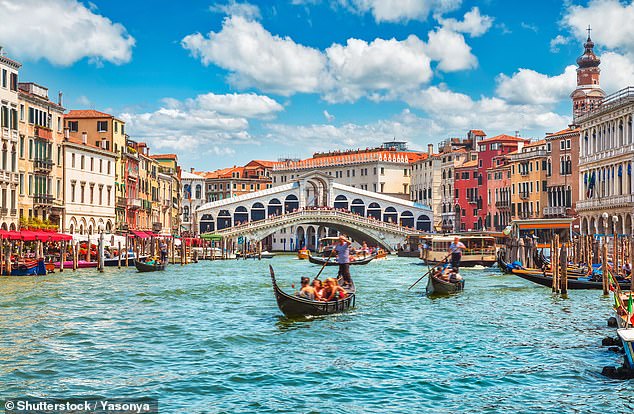 New laws, which went into force earlier this month, ban snacking in four streets in the Italian city’s historic centre.

Local businesses in the affected sites have been asked to put up signs in prominent places warning visitors about the ban. They read: ‘Respect residents, traders and workers of this street.’

In the capital Rome there has also been a crackdown on unruly tourists and authorities have even considered fencing off the celebrated Spanish Steps to protect them from ‘barbarian’ hordes of sightseers.

Last year, the city considered barring tourists from stopping next to the Trevi Fountain to crack down on illegal swimming there.

And in Milan earlier this year, visitors were banned from taking pictures with selfie sticks.

‘Into the Wild’ bus removed from Alaskan wilderness