An upcoming change in the laws around sex in Indonesia could affect British tourists heading to Bali.

This week it was reported that Indonesia, a majority Muslim country in Southeast Asia, was set to pass new legislation to outlaw sex before marriage.

The new law will apply to foreign tourists as well as Indonesian citizens and carries a punishment of up to one year in jail for rule breakers.

Living with a partner before marriage will also be banned and carry a six month jail time penalty.

It would also apply to all areas of Indonesia – including holiday hotspot Bali – and is expected to come into force in three years. But, what does this mean for British tourists?

Due to this, it attracts hundreds of thousands of foreign tourists – including British singletons and unmarried couples.

It’s thought that the new laws will be passed on December 15, but will take time to come into affect.

When the ruling does pass it may make it more difficult for unmarried couples to check into a hotel room, reports Daily Mail.

Maulana Yusran, deputy chief of Indonesia's tourism industry board noted: “Hotels or any accommodation facilities are like second homes for tourists.

“With the ratification of this criminal code, hotels are now problematic places.” It is believed that couples can only be prosecuted if reported by a spouse, parent or one of their children.

However, before booking a trip to Bali as an unmarried couple you should always check current FCDO advice on the gov.uk site.

The official advice has not yet been updated, but should be once the law has been passed.

Singletons should also take the advice on board before hooking up with other tourists or locals.

It would be wise to double check any fine print before booking a hotel in case the venue has its own rules.

British tourists should always double check any rules that apply when they go to book a holiday destination.

Plus, make sure you know the laws about what you can bring into each country before you pack!

There are multiple nations that have rather unusual restrictions that you may not know about unless you look at official guidelines. While parents heading to Canada should be aware that baby walkers – that’s baby seats on wheels – have been banned in the North American country since 2004.

The walkers are illegal to bring into Canada even for a holiday.

In Singapore, it’s been illegal to bring chewing gum into the country since 1992 – exceptions exist for dental and nicotine gum.

While in Japan, any drugs containing pseudoephedrine – like Sudafed and Vicks inhalers – are banned.

Medicines containing codeine are also banned in Japan, and foreign nationals have even been detained and deported for offences.

Always be aware of the rules of your destination and check before you leave for the airport.

We put together a list of some of the strangest rules out there that you might not have heard of. 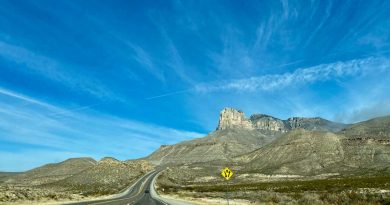 How 2,000 miles, 4 national parks and a $10 rental car made me love the great American road trip

The winners of the BBC Countryfile Magazine Awards 2020 revealed