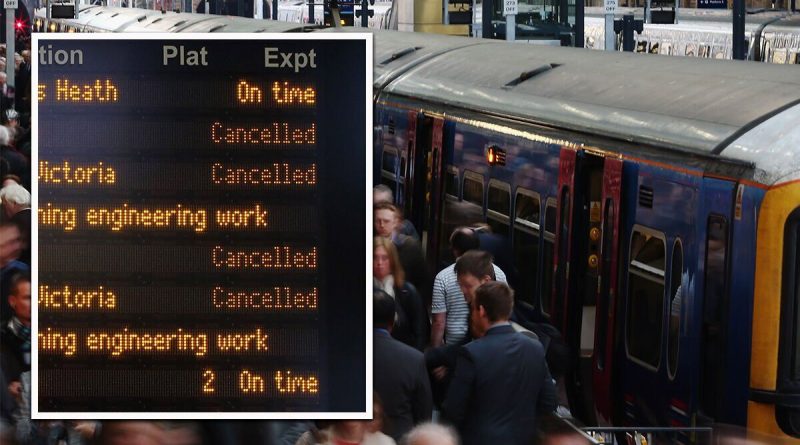 Commuters have been warned of severe disruption as more than 50,000 workers across Network Rail and 13 train operators are due to stage a mass walkout this week. The strikes will leave only a fifth of mainline services running with the majority operating for a maximum of 12 hours, impacting passenger and freight services across England, Scotland and Wales.

The rail strikes come as members of the National Union of Rail, Maritime and Transport Workers (RMT) voted overwhelmingly for action last month in a dispute over stagnating pay and job losses.

The union is fighting for an 11.1 percent pay rise in line with inflation, and fighting against Network Rail’s proposed £2 billion cuts that could result in what RMT said was 2,500 job losses.

RMT general secretary Mick Lynch told Sky News’s Sophy Ridge: “We have to fight this because we haven’t had any pay rises, we are faced with thousands of job cuts and they want to rip up our terms and conditions in a form of hire and re-hire that is internal to the railway.

“If there is not a settlement we will continue our campaign. I think there are going to be many more unions balloting across the country because people can’t take it anymore.”

When are the rail strikes taking place?

The first day of the planned strike on June 21 will see London Underground RMT workers join the strike over a separate dispute over pensions and job losses – which will bring the total number of strikers to over 50,000.

RMT members include everyone from drivers, guards and catering staff to signallers and track maintenance workers.

On Thursday June 23 and Saturday June 25, about 40,000 rail operators – but not London Underground staff – will strike.

The trains in operation will be running on a reduced service between 7.30am and 6.30pm.

Commuters are advised to carry out any planned journeys within this time span to prevent getting stuck.

The 13 train operating companies expected to be affected include:

Which Tube lines will be affected?

London Underground will be staging a 24-hour strike on Tuesday, June 21.

Transport for London (TfL) advises people not to travel if possible, as services will either be severely disrupted or completely halted on:

If you have to travel, commuters are advised to finish their Tube or rail journey by 6pm.

On Wednesday, June 22, there will be no services before 8am, and it’s advised to avoid travelling before mid-morning, as disruption is likely to continue.

There will be a reduced service on the London Overground and Elizabeth Line until mid-morning.