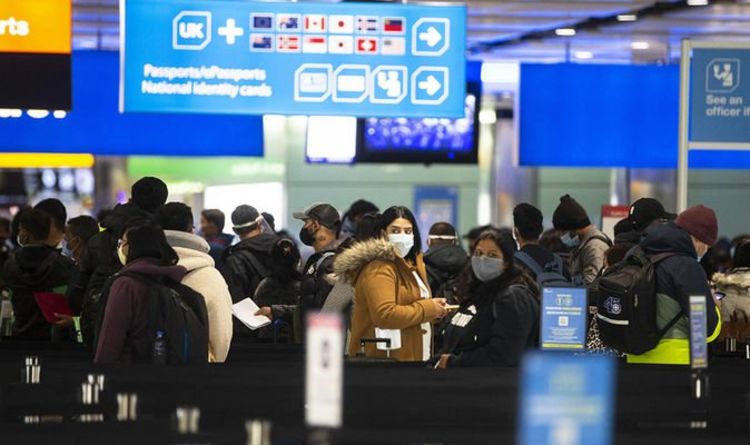 In further changes to the green and amber lists, the UK Government announced the Balearics will be downgraded to amber, while Croatia and Bulgaria will be moved to the green list. Meanwhile, Cuba, Indonesia, Myanmar, Sierra Leone have been downgraded to the red list, with all changes due to take place from July 19, so-called Freedom Day from coronavirus restrictions.

Despite many in the UK excited to pack their bags and escape the confines of their homes after long lockdowns, there looks set to be yet another bump in the road: queues.

Last week, Transport Secretary Grant Shapps said: “People can expect that their experience at the border will be different, with longer waiting times than before.”

This won’t be anything new – recent months have seen chaotic scenes in UK airports, with queues in Heathrow reported up to seven hours long due to Border Force staff shortages and passengers from ‘red list’ countries forced to mix with those from other nations.

Last week, passengers at Heathrow’s Terminal 5 were met with enormous queues and chaos as hundreds of security staff were suddenly told to isolate by NHS Test and Trace.

Queues are also down to Border Force officials having to manually check all Covid test results, leading to excessive airport waiting times and a failure to detect fraudulent testing documents, allowing new variants to slip through the net.

Now, a cross-party group of MPs is calling on the Government to upgrade e-passport gates and digitise Covid test results at airports ahead of the reopening of mass foreign travel, or else fear the impact on international travel – already crippled by the pandemic – could get worse.

Mike Rhodes, Founder of ConsultMyApp who works on biometric solutions in technology, told Express.co.uk: “With the number of travellers expected to increase rapidly as more changes to the green and amber lists are made, this capacity issue is going to become ever more acute.

“The challenge is solvable by using existing technology on smartphones and automating the border control system, but so far almost no technology has been implemented to deal with the issue.”

In the House of Commons last week, former prime minister Theresa May suggested extra staff should be brought in to deal with the requirements.

Mr Rhodes said: “In this stone age, the stance of putting more boots on the ground seems ludicrous and will do little to alleviate the growing pressures on border force officials.

“If we are going to truly open up travel and tackle airport waiting times, these sort of manual and paper-based measures simply will not do.

“Ultimately, the government needs to automate the border control processes so that passengers can return to using e-gates and border force officials do not have to check every single form manually.”

The travel industry, one of the hardest hit during the pandemic, has criticised the Government’s latest plans to reopen travel.

Airlines accused the Government of a “double standard” in its approach to international travel, with decisions on travel strict when rules at home are relaxed, and cases are rising rapidly.

Johan Lundgren, chief executive of easyJet, said that the UK’s COVID-19 infection rates were rising while much of Europe’s remained lower.

She said: “We cannot understand why the Government is going to allow people to go to a nightclub – without a mask or social distancing – and yet is not comfortable with people going to the beaches of Europe, where the infection rates are lower than in the UK.

“Yet again we see this double standard where travel is treated differently to the domestic economy.”

And adding to the confusion, the World Health Organisation has advised against requiring proof of vaccination for international travel, as the UK government has said that those double-jabbed or under 18 will not have to quarantine.

But the WHO said that requiring proof of vaccination deepens inequalities and promotes unequal freedom of movement.