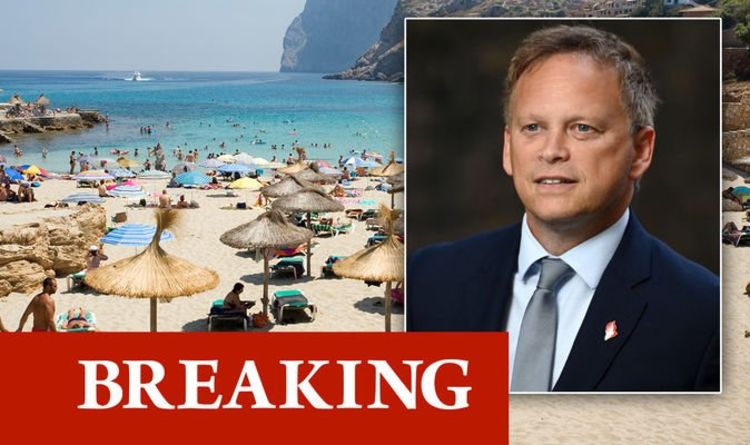 Travel has changed since the start of the coronavirus pandemic. Although it opened up massively earlier this year, with leisure travel becoming legal once again, the rules for travel make it more difficult and expensive to go on holiday. Now the Transport Secretary Grant Shapps has revealed travel rules will be changing again, meaning it should be easier for British travellers to go abroad.

The announcement was made on Friday amid several changes to how travel will be managed going forwards.

From October 4, the current traffic light system will be scrapped – and instead replaced by one red list only system.

In addition, eight countries are being taken off the red list.

But this was not the only announcement Mr Shapps made.

Later in October, those people required to take a PCR test will be able to replace the day two PCR test with a cheaper lateral flow test.

“From Monday, October 4, if you’re fully vaccinated you won’t need a pre-departure test before arrival into England from a non-red country and from later in October, will be able to replace the day two PCR test with a cheaper lateral flow.”

What should you know about the travel changes made today?

Pre-departure tests no longer required if you are fully vaccinated

Testing is a required part of international travel and has been since foreign travel opened up.

From October 4, fully vaccinated travellers will no longer need to take pre-departure tests when they return to England from a non-red list country.

PCR tests will be replaced with cheaper alternatives

Later in October, anyone still required to take PCR tests will be able to skip the exorbitant fees charged by some of the Government-approved PCR tests.

Instead, cheaper lateral flow tests will be accepted.

These tests will only be required to anyone returning to England from red list countries.

The Transport Secretary unveiled a major reopening of foreign travel starting next week with the removal of eight countries from the 62 strong red list which requires arrivals to quarantine in a hotel at a cost of £2,285 per person.

They will move off the red list from 4am on Wednesday, September 22.

The traffic light system for travel abroad which has been in place for the past few months will be scrapped.

The amber and green lists will be removed.

Instead, there will be the red list only and all other countries will be free to travel to without any designation.

Don't want to fly this summer or fall? United waives change fees through end of year

Is this the world’s most picturesque airport?