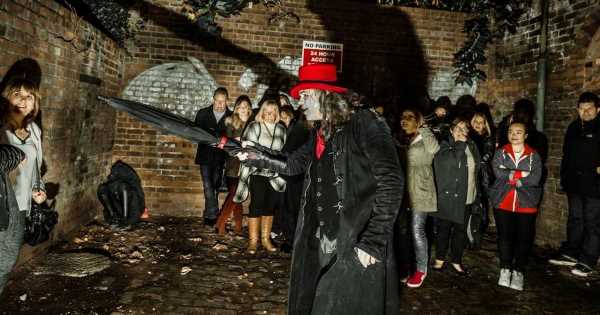 October is here so it’s time to dust off the pumpkins and sweets and get ready for Halloween.

And, there's plenty of things to do in the run up to October 31 either at the weekend or during October half term with the kids.

Tripadvisor has rounded up a list of the best-rated spooky tours in the UK to try out this month (or anytime if you have a penchant for ghost, ghouls, witches and murderers!).

So, if you want to get the shivers, shriek from fear or scare your family there's something for everyone out there this month.

From a London tour about British serial killers and the psychology behind them, to a ghostly walk below the streets of Edinburgh in underground caverns normally closed to the public, these are the top creepy – but very fun – experiences to try this Halloween.

Book one… if you dare!

The Cloak and Dagger Tour – London Discover a darker side of London on this immersive and interactive tour experience.

Walk the city’s streets at nights with your guide and hear little-told stories of London’s grisly past – stories you won’t read in any guide book. Then settle down in Southwark’s George Inn and witness the recreation of a true story of murder and revenge, told in the very room in which it happened. At street level, Edinburgh is a peaceful and pretty city—but the subterranean tunnels below tell an entirely different story. On this ghostly walking tour, explore historic sites including Greyfriars Kirkyard and St. Giles’ Cathedral with your enthusiastic guide, and hear chilling tales of murder and revenge. Delve down into underground caverns normally closed to the public, and learn of Edinburgh’s grim and gruesome past. The Deathly Dark Tour is a family friendly experience, perfect for those who have a bit of a wicked streak and are looking to explore the darker side of the city with a tour guide famous for his wonderfully dark sense of humour. On this spooky experience, your guide Declan – an expert on serial killers in London, Britain and worldwide – will give you an insight into the behaviour and psychology of serial killers. You’ll learn about some of the most gruesome murders committed in London and elsewhere around Britain. And with a 12+ certificate due some of the chilling tales Declan tells, this one isn’t for the faint hearted.

Cambridge is known for its University and ancient buildings, but a lot of visitors miss out on the haunted history and mysterious stories associated with its famous buildings. With this tour, tick off top sights such as the Market Square, Magdalene Bridge, Clare College, and Trinity College—but instead of the usual historical information, hear stories about hauntings, occultists, witches, and phantom fellows. Highlights include tales of Oliver Cromwell, the hangman’s house, and the Round Church. Hear all about the darker history of Edinburgh: murderers, thieves, cannibals, hangings and decapitations, witches, the Plague and streams of human waste. Learn about the most notorious citizens of Edinburgh and how ghost stories are born. Your sinister host Vincent (The Man in the Hat) will guide you through the ghostly, creepy, strange history of Glasgow City by night. You will discover Dracula's Scottish Connections and meet the Ghosts of Glasgow. Enter the macabre world of Body Snatching and become acquainted with Glasgow's most notorious murderers and much more!! One for a fun night at home with friends. Follow Jack the Ripper’s footsteps through London without ever leaving home during this virtual murder mystery tour. After you’ve virtually joined your guide online, you’ll get assigned a suspect card, and you’ll journey back in time to 1888, when the serial killer was at large. Your guide takes you to spots that were significant to that period of history, while you explore the dark past of Jack the Ripper and London. One for fans of the paranormal, on this tour you’ll follow your guide around Liverpool’s city centre, hearing spine chilling stories as you go. Stops include Rodney Street, the graveyard at the Liverpool Cathedral, and St. Andrew’s Cemetery, where a pyramid is supposed to house a man who sold his soul to the devil. Enjoy a budget-friendly, one-of-a-kind way to explore Birmingham: this self-led smartphone game will bring the city’s spooky history to life. After signing up, download the app and set off at a time that suits you best. You’ll solve clues, discover top landmarks and hear ghost stories and creepy lore along the way.