Tube drivers will drive slowly on four London Underground lines from 10 October until further notice in a move designed to cause significant disruption to rush hour timetables.

The RMT union has instructed members to drive at half speeds in an ongoing dispute over the “barrage of noise” created on certain lines.

Drivers will curb their speed on 28 sections of track spread across the Jubilee, Central, Northern and Victoria lines where the noise is at its most severe.

More than 95 per cent of RMT members voted in favour of industrial action; the union said the primary concern is protecting drivers’ health and well-being.

Members have been told to drive trains in manual mode at an appropriate reduced speed to “mitigate the creation of excessive noise and to alleviate the distraction, discomfort and anxiety caused in the affected areas.”

“It is appalling that RMT driver members have had to resort to a programme of industrial action in order to force London Underground to take the issue of excessive track noise seriously,” said RMT general secretary Mick Cash.

“This is an issue that impacts not only on our members but on the travelling public as well and the union is absolutely determined to ensure that the company don’t drag their feet for a moment longer.”

He added that the union would consider what further action could be required “to ensure that the health of our members exposed to this barrage of noise night and day is given top priority.”

A TfL spokesperson said: “We have met with the RMT on a number of occasions on the plans we have to tackle Tube noise and look forward to continuing to work with them to find a resolution.

“The health and safety of our staff and customers is our first priority and we have already agreed to provide a broader range of ear protection to drivers who wish to use it alongside plans for longer-term solutions to this complex issue.”

According to research released in 2019, the loudest Tube journey through central London reaches 109dB – the same volume as a helicopter taking off.

It found that the loudest tube lines are the Victoria, Bakerloo, Jubilee and Northern lines.

One five-minute stretch on the Victoria line averages 90dB, while noise levels frequently reach 85 decibels (dB), the point at which – if sustained for eight hours a day – employers are legally required to provide hearing protection for staff.

TfL has said it is offering drivers a wider range of ear protection in response to their complaints, as well as trialling methods of reducing in-carriage noise, including under-rail pads. 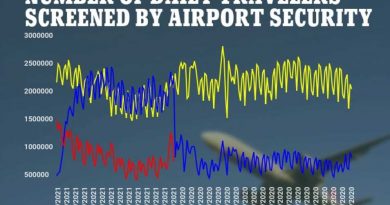 US air travelers top 1.5 million for first time since March 2020