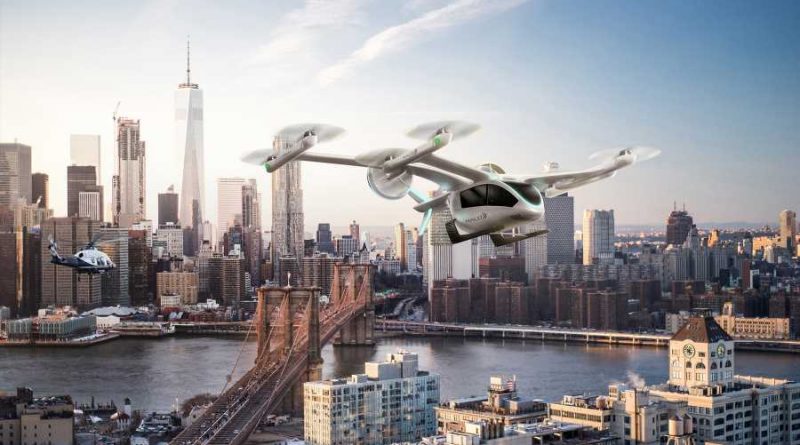 The amenities on offer in a bustling metropolis like New York City or London are palpable: unrivaled architectural gems, biannual Fashion Weeks, and highly coveted leather-bound menus. But what about the traffic? Or, the desire to avoid it? Meet Eve Urban Air Mobility Solutions, an aircraft that is like a super sleek cross between a tech-forward helicopter and a swanky private jet. The brand-new aircraft is the brainchild of two aviation experts: Eve, a new independent company owned by venerable aircraft manufacturer Embraer, and Halo, another relatively young company (part of Directional Aviation’s OneSky Flight family) that tackles the operational aspects of the new aircraft.

A fleet of 200 of Eve’s electric vertical take-off and landing aircraft (dubbed eVTOL for aviation experts) is set to arrive in New York City and London in 2026—with half of them in Manhattan and the other half across the pond. As for access, the aviation brands are still working out the specifics, but they’re exploring the idea of memberships for people who want to make relatively short journeys—midtown Manhattan to Newark Liberty International Airport or London to Windsor, for example. With a range of around 60 miles, however, travelers aren’t exactly limited. Plus, the aircraft will be up to 80% quieter than typical helicopters and boast a 50% lower operating cost—otherwise known as a win-win. This means that Eve vehicles could possibly fly over densely populated areas where noise pollution is a concern.

It may seem a bit complicated so far out, but the collaboration’s goal is simple: offer an on-demand urban mobility solution where take-offs and landings are not limited to the ground and water. The leaders behind the endeavor are confident that this will not only work but pan out quite successfully because it’s backed by two leaders in aviation. Halo and parent company OneSky Flight have years of experience operating aircraft, while Brazil-based Embraer is one of the world’s leading aviation manufacturers. Until 2026, New Yorkers and Londoners will be patiently waiting to quite literally elevate their commutes.

Covid 19 coronavirus: The Kiwi stuck in the middle of the Pacific

What effect would a tourism boycott have on Cyprus?