Three wildfires are currently raging in both Southern and Northern California, forcing at least 100,000 people to evacuate their homes and destroying thousands of acres of land in the process.

Two of the fires are burning in Thousand Oaks in Southern California, a community just north of Los Angeles. Cal Fire issued a mandatory evacuation for parts of Malibu as well. In Northern California, a wildfire has destroyed most of the city of Paradise, about 80 miles north of Sacramento, forcing at least 40,000 people to evacuate their homes with little notice. Multiple injuries and deaths have been reported, but that state has not released any specific numbers.

Due to a lethal combination of high winds, low humidity, and dry land, the wildfires massively increased in size from Thursday through early Friday morning.

This is footage at the corner of Pearson and Edgewood Lane at 10:05am. Traffic was at a standstill…. People were abandoning their cars and running with their babies and kids. This was right before someone rammed our vehicle with theirs trying to get through… There were no firefighters in sight. I am hoping all of these people made it out.

The Camp Fire in Northern California began growing uncontrollably on Thursday at an estimated rate of about 80 football fields per minute, according to the California Department of Forestry and Fire Protection (Cal Fire). It has already devastated an area of more than 70,000 acres. The department also declared a state of emergency for Butte County. As of Friday morning, only about five percent of the fire is contained.

“It was just a wall of fire on each side of us, and we could hardly see the road in front of us,” police officer Mark Bass told local ABC News after an emergency evacuation.

Evacuees who already made it out of the area are urged to register themselves as safe with the American Red Cross.

In the southern part of the state, two wildfires (named Woolsey Fire and Hill Fire) have forced emergency evacuations of more than 75,000 homes in Los Angeles and Ventura Counties, according to local CBS News.

Within just a few hours on Thursday, the Woolsley Fire exploded from an area of 2,000 acres to about 8,000. As of Friday morning, it has covered more than 10,000 acres and is zero percent contained.

Malibu’s mandatory evacuation is in effect for the area south of 101 Freeway from the Ventura County line to Las Virgenes, southward to the ocean.

About 13 miles to the west, the Hill Fire has swallowed at least 6,000 acres of land, according to Cal Fire. The fire is just down the street from a bar where a mass shooting took place on Wednesday night, killing 12 people.

“Fire conditions are extreme and we are seeing it from border to border,” a spokesperson for the California Governor’s Office of Emergency Services said at a press conference on Friday morning. All those who live in evacuation zones are urged to leave as quickly as possible, the Ventura County Fire Department said.

Looking Back at LGBTQIA+ Travel Stories: Season 2, Episode 7 of 'Let’s Go Together'

You can fly to Antarctica on a Boeing 757 — and run a marathon there, too 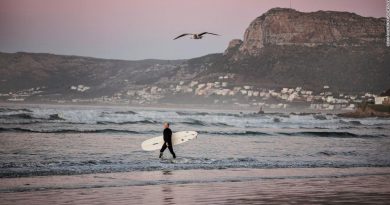