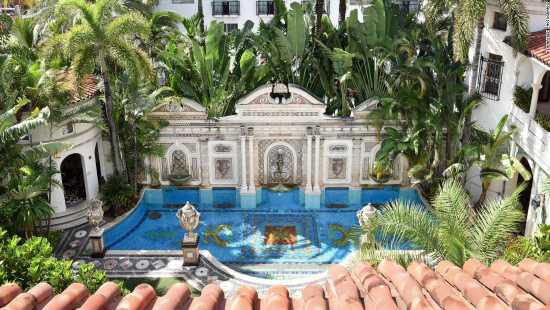 The world-famous Ocean Drive is one of the most photographed stretches of Miami Beach, But with its neon lights and sidewalk cafes serving beer-garitas for two, it’s not known for being a high-end destination.

The exception, nestled amid low-rise Art Deco hotels, with streams of tourists strolling past, is the Villa Casa Casuarina — better known as the Versace Mansion.

What many of those selfie-snapping tourists outside may not realize is that the former home of late fashion designer Gianni Versace isn’t a museum or private home, but a hotel.

And it’s a hotel where guests can sleep in what was Versace’s bedroom. Or in the bedroom of his sister Donatella. Or perhaps the suite where Madonna used to stay when she visited Versace in the ’90s and helped put the Miami Beach neighborhood of South Beach on the national scene.

If a $1,000-plus-a-night hotel room is out of reach, members of the public can indulge in the villa’s Baroque grandeur with a dinner reservation at Gianni’s, and an aperitif in the intimate, clubby Onyx Bar, in the space that used to be Versace’s kitchen.

Since Versace’s death — he was shot dead on the steps of his mansion in 1997, thus the camera-wielding tourists outside — the property has changed management a couple of times.

However even now, 20 years later, under the ownership of Jordache Enterprises, it retains the designer’s over-the-top splendor. (Donatella auctioned off some of the home’s contents in 2001, but what remains are the richly decorated walls, floors, ceilings and windows, plus the pool, garden and southern wing.)

The best-known property on Ocean Drive

The unapologetic opulence of Casa Casuarina made it an obvious location for filming the TV series “The Assassination of Gianni Versace: American Crime Story”, which will premiere on FX on January 19, 2018.

In May 2017, tourists along Ocean Drive were treated to in-costume sightings of the show’s stars, including Penelope Cruz as Donatella, Ricky Martin as Versace’s longtime partner Antonio D’Amico, and Edgar Ramirez as the designer — who appeared on the balcony of Versace’s former bedroom clad in a pink bathrobe.

The room is now known as The Villa Suite, and, like the rest of the mansion’s interiors, it’s as over-the-top on glitz as Versace’s collections. The most arresting feature, also available in Donatella’s bedroom, the Venus Suite, is a custom-made double-king-size bed.

No longer on show is Versace’s $10,000 marble toilet with 24-karat gold-plated seat — one of the items auctioned off by Donatella after her brother’s death.

From flashy home to over-the-top hotel

Today, Casa Casuarina has 10 hotel suites, plus a restaurant and bar, a lounge that can be used for meetings, a rooftop and an elaborate Mediterranean-style Mosaic Garden, with tiles picturing icons of Greek mythology, chief among them Medusa — who has a place of honor on the Versace brand’s logo.

The most elaborate Medusa can be found in the Villa’s 54-foot-long pool, inspired by Versace’s “Marine Vanuras” collection and said to be made from more than one million mosaic tiles, thousands of them 24-karat gold.

The Medusa mosaic was crafted in Versace’s home town, Reggio Calabria, Italy, and then taken apart and shipped to Miami Beach in pieces, where it was painstakingly reassembled.

Adjacent to the garden, in the “new wing” that Versace built when he acquired the mansion, is The Moroccan Lounge, which used to be his gym, and still houses his eight-person hamam Turkish steam room and shower.

The room where Madonna would stay, the Mosaic Suite, is located upstairs, where the singer apparently enjoyed the bathroom’s acoustics and the bird’s-eye view of the pool.

The history of Casa Casuarina

Versace purchased Casa Casuarina in 1992, after falling under the spell of the Magic City and the Spanish architecture of the grand house.

Next door was an Art Deco Hotel called the Hotel Revere, which Versace also snapped up, and demolished to make way for his garden, pool and the south wing, which used to house one of his libraries.

An estimated $32 million in renovations over three years transformed the historic property into a manse fit for a style king. But even before his tenure, Casa Casuarina had a flashy history.

It was built in 1930 by Alden Freeman, whose father worked for The Standard Oil Trust and left him a fortune which allowed him to retire at 27 and build his dream house, inspired by the historic Alcazar De Colon in Santo Domingo, Dominican Republic. Freeman lived in a top-floor suite and either housed his friends or rented the 23 remaining apartments.

Many of the architectural details of the house, including the key lime coral floors, the pillars surrounding the courtyard, and the decorative medallions of famous personalities (Cleopatra, Gandhi, Rockefeller and — more dissonantly — Mussolini and Lenin) date to Freeman’s time, which ended with his death in 1937, when the house was sold and run as an apartment complex.

By the 1980s, the building fell into disrepair, although most of the original fittings and artworks survived.

As with many famous buildings, Casa Casuarina has its share of mystery: There are rumored to be secret doors and passageways throughout the mansion, although a door that used to lead from Versace’s bedroom to an entertainment den has since been closed off.

It’s also said that Versace maintained a pigeon coop beneath the rooftop observatory, and would use the messenger pigeons to send notes to friends. Details are scant on these rumors, but what’s certain is that The Villa will continue to intrigue visitors, no doubt even more so when the TV series hits screens next year.

Travel expert on why Ryanair's Covid rebooking policy is sensible