A video filmed on board an AirAsia flight, captured a man picking his toes and dry skin from his feet, before dropping it on the floor. The video, captured by fellow passenger Jade Thomas, took place on a flight from Kuala Lumpur to Hanoi.

It was during the flight that Jade noticed that the man across from her – wearing a polo shirt, shorts and a face mask – had put his feet up against the chair in front and began to pick his toes and dry skin.

The unnamed man then began to remove the fluff from between his toes as the grime fell to the floor much to Jade’s horror.

Speaking to 7 News after posting the video to her Hanoi Facebook group, she said: “I was returning from a trip to Bali with my boyfriend. During the flight, we observed some poor behaviour.

“There was shouting, loud burping [and] not following requests of airline staff. 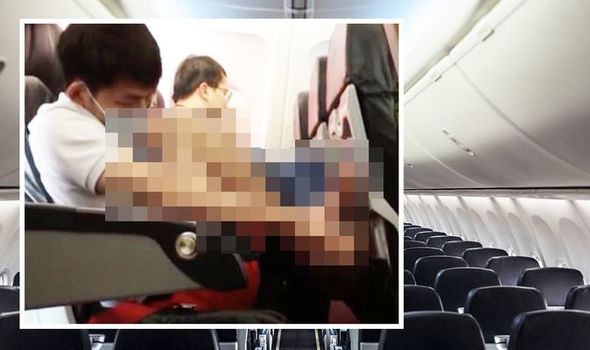 “For example everybody stood up and started getting their hand luggage before the seatbelt sign had been switched off.

“Then of course, there were some people not wearing shoes.”

She does not explain whether he was told to stop doing it.

A passenger in the background noticed him doing it but didn’t say anything.

DON’T MISS
World War 3: Is Dubai safe as Iran tensions rocket? FCO issues latest travel warning
Flights: Sit in this plane seat to boost your chances of an upgrade to Business Class
Flights: Plane passengers dub man ‘grotty pig’ after he does this vile move in his seat

Someone else walked past, appearing to be a flight attendant.

This unusual act happens more frequently than you may think.

In a Reddit thread, flight attendants discussed some of the disgusting things they’ve seen mid-flight, ranging from used underwear to vomit.

“I once discovered vomit outside of the paper bag which spilled through the seat pocket,” an unidentified flight attendant explained. 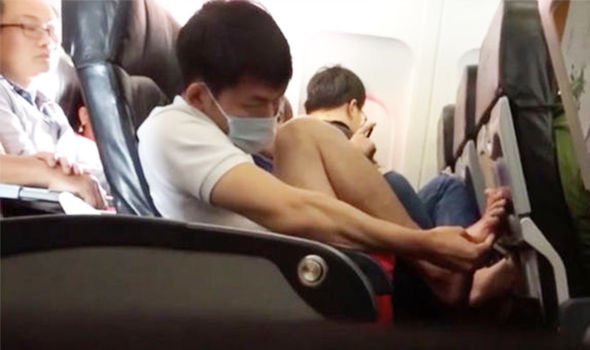 “It was absolutely awful, but what can you do?”

Another user shared their discovery of a particularly smelly clothing item.

“I once found a crusty sock in a pocket on a flight from Houston to Seattle where a rather rotund gentleman had been sitting.”

One flight attendant reeled off a list of items which included “dirty tissues, knickers and half sucked sweets”.

She explained: “I ALWAYS recommend you never, ever, ever, EVER use or put anything in the seat pocket. They are cleared of rubbish but are never ‘cleaned’.” 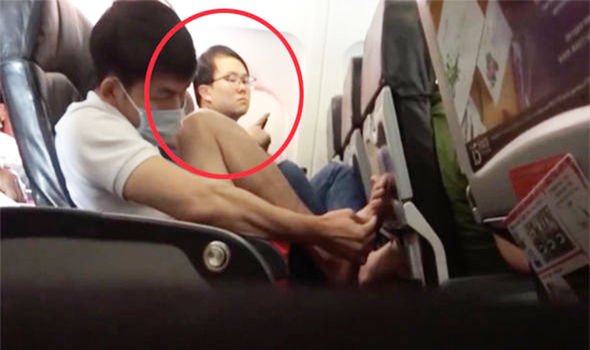 A study conducted by the Canadian Broadcasting Corporation (CBC) found that seat pockets, washroom handles, tray tables and seat belts are the filthiest surfaces on a plane.

To conduct their investigation, the team took a total of 18 short-haul flights between Ottawa and Montreal, flying with Canada’s three major airlines — Air Canada, WestJet and Porter — at various times throughout the day.

Those samples were analysed in a lab at the University of Guelph by microbiologist Keith Warriner where the discovery was made.

“I was really amazed about how much we actually recovered from them,” he said. “Some of them are scarier than others.”

Yeast and mould were detected on the majority of flights along with E. Coli bacteria.