There’ll be no craic at the Shamrock tonight, says Lisa Griffin, who has run the Irish pub in Benidorm for 25 years.

Griffin’s 15 staff, who include a four-piece band, are on furlough and no one knows what will happen when the Spanish government’s scheme comes to an end on 30 June.

“Until the tourists come back, hotels open, flights are at capacity and quarantine is lifted in the UK, it won’t be worth our while reopening,” she says. “It’s what happens in Britain that really affects Benidorm, because it’s mainly them who visit.”

Benidorm is one of Britons’ favourite holiday destinations, luring more than a million a year and making up 75% of the resort’s total foreign visitors. The busy March to June season has already been lost this year.

Griffin opened the Shamrock on 6 March in readiness for St Patrick’s Day, the pub’s busiest week of the year, but had to close three days before the 17th because of the lockdown.

“I’m hoping the winter season will be better than normal,” she said.

Griffin is one of many who is dismayed at what she sees as the UK’s erratic response to the pandemic.

“Now we’re down to zero deaths in Spain but the UK hasn’t behaved well in the lockdown,” said Michelle Baker, who edits the local Round Town Times paper and runs the Benidormforever site. “We had four hours to shut down and we knew that if we got the virus in Benidorm it would be all over the tabloids and no one would want to come back here.” 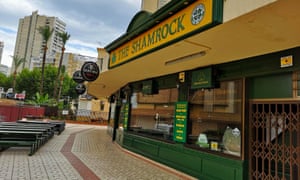 Although around half of Benidorm’s visitors are Spanish, Baker, who has lived there for 37 years, says it’s the British who spend the most money.

“Spaniards will nurse a café con leche for three hours,” she said. “The bottom line is Benidorm needs the Brits.”

A number of bars have already closed permanently because they can’t afford the rent and many more are likely to go out of business over the summer, according to Karen Maling Cowles, president of the Benidorm British Businesses Association.

“We want business to pick up but we don’t want another spike in the virus – it’s a question of life before business,” she said, adding that British businesses need to do more to attract Spanish tourists, such as putting their menus in Spanish as well as English.

The Spanish government is keen to reactivate tourism, a vital element of the nation’s economy, although no one expects anything like the 82 million people who visited last year. It plans to reopen its borders with France and Portugal no later than 1 July and create selective air corridors to the Canary and Balearic islands

However, these corridors will only be opened with countries or regions that appear to have the virus under control and at present Britain is unlikely to be one of them.

Another factor is the UK’s current policy of imposing a two-week quarantine on anyone arriving from another country. In effect, people going on a one-week holiday would have to take three weeks off work.

Antonio Pérez, the mayor, says he’s optimistic but realistic. “I think Benidorm will be full in August, not full like it was, because of social distancing, but full in so far as circumstances allow,” he said.

In the meantime, Benidorm’s towering hotels and apartment blocks are empty. It’s like a ghost town, said Baker. “You keep seeing the same people over and over, like extras in a low-budget movie, because once you strip out the tourists there are very few people here.”

The sudden disappearance of tourists has prompted many popular destinations to rethink how and to whom they market themselves. “It’s a good time for us all to think outside the box and perhaps aim our businesses at a different type of market and not depend on low-cost tourism,” said Cowles.

So is it time for a Benidorm makeover?

“The town hall would say yes because they’ve battled for decades against what they see as Benidorm’s negative image,” said Baker. “However, Benidorm’s bread and butter is the Brits and the Brits love, love, love Benidorm just the way it is.”

Travel refund measures ramped up after 21,000 out of pocket holidaymakers issue complaints

Saudi Arabia wants you to visit

Bon voyage! Let’s get back on track full steam ahead for top adventure