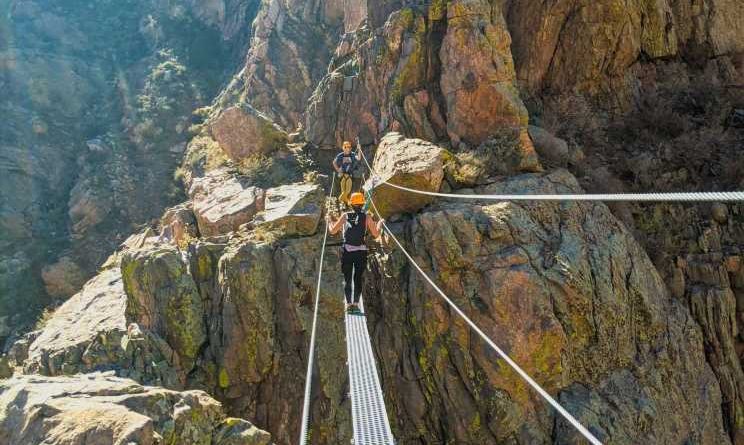 It was 30 degrees in Idaho Springs, Colorado, in mid-April, and I was perched on a cliff edge in the Front Range of the Rocky Mountains, doing my best to keep moving forward despite having lost most of the feeling in my fingers. I was scrambling along the Mount Evans Via Ferrata, a set of metal cables and rungs permanently installed near the base of one of the state’s most majestic 14ers. It’s probably a good thing my phone was pinned to my body by a well-worn climbing harness. If I’d tried for a selfie hanging over the void, it probably would have wound up on the craggy rocks below.

Like a shipping pier transformed into an urban park, a via ferrata is a piece of industry reimagined. The first ones were installed in the Dolomites during World War I to help soldiers navigate the peaks more easily. In the years since, they’ve been used regularly by alpinists both serious and casual. Their cabling running up the mountain removes one of the biggest obstacles for novice climbers: the need to set anchors. (As I heard more than one guide quip, an improperly set anchor can really ruin your day.)

If you’ve heard of via ferratas, or iron paths as we would call them here, you probably associate them with Europe. But Colorado is suddenly flush with new routes. The latest and highest, coming to Arapahoe Basin this summer, will climb to 13,000 feet. They’ve been popping up at other major ski areas in the West, from Jackson Hole to Taos, and are an increasingly popular feature at remote resort properties like Camp Sarika by Amangiri in Utah and Tordrillo Mountain Lodge in Alaska.

Still, despite their growth, via ferratas remain a relatively hidden piece of the American adventure infrastructure. Almost to a person, everyone I told about the reason for my trip to Colorado—on my flight to Denver, at the car rental counter, at the adjacent picnic table at the New Terrain Brewing Company—put on a confused expression and said, “What’s that?” Which is a shame, because even more than the well-established ones in Europe, via ferratas in the U.S. offer a thrill that pretty much anyone can enjoy. Spencer Bonapace, my guide, told me he’s brought septuagenarians celebrating anniversaries, companies on team-building retreats, even tweens, to slide their clips along the steel cable that marks the route, as I was doing now. In many places where via ferratas can be found, summer activities like mountain biking and rock climbing have required technical expertise. Think of via ferratas as a new blue run on a mountain dominated by double blacks. The notion that they provide an anyone-can-do-it adventure has contributed to the growth in routes and interest. (Mount Evans is now often booked solid during the high season.) As if to emphasize how safely you’re anchored to the mountain, Bonapace showed off an exposed section he thought was a choice spot to lean back off the rocks.

This is not to say that I never got rattled along the route. “You’re gonna want to shuffle,” Bonapace told me as we reached a snow-covered platform that extended a good 15 feet over the edge of a cliff. I can have a bit of a thing about heights, so I baby-stepped my way to the slick edge, holding a rope lanyard for balance, and took several long moments to steady myself. At that point I was instructed to “just fall backwards.” As scary as this may sound, during the 50-foot free fall I clicked back into my comfort zone, knowing my equipment would catch me before I hit the ground.

The story of via ferratas in Colorado is a story about opening hard-to-reach mountain spaces to people who couldn’t access them before. As Todd Rutledge, a longtime guide, explained to me, it all started in Telluride with a colorful local climber named Chuck Kroger. “In 2007, Chuck and some friends had put in enough rungs and bolts that it was doable. He was also diagnosed with pancreatic cancer and not given long to live. He told one of his buddies to go finish that route and set it up so his wife, who was not a real climber, could do it.” It took several years, but Kroger’s wish was granted; today Telluride is home to one of the most beautiful and exposed via ferratas in the country. It’s also one of the very few that is accessible to the public without a guide. That said, if you’re at all inexperienced—with the equipment, with the heights, with the technique—you’ll want a guide to serve as your introduction to the iron paths and gateway to the mountains.

Rutledge relayed another story that brought home the power of expanding opportunities to experience these beautiful, dramatic places. Two teenagers had convinced their mother to switch their hike to a via ferrata trek. “We got to the point where you have to step out onto these rungs, and she started to melt down. But she was determined because her kids were out front, hanging off, going, ‘Mom, look at this!’ I was standing next to her, put my hand on the small of her back and had her do some breathing exercises. She got across that section and other sections that had big exposure. At the end she gave me this huge hug. She said, ‘I never would have done that, but I’m so glad I did. I feel transformed.’ ”

Where To Find The Via Ferratas

Accessible only by helicopter, this route climbs 900 feet, with views of the Triumvirate Glacier and a cable walk across a gap in the mountain. Tordrillomountainlodge.com

Passing beneath Torrent Falls, America’s oldest via ferrata (it opened in 2001) allows kids as young as 10 to clip in. Redrivergorge.com

About an hour’s drive from Denver International Airport, this via ferrata combines clipped-in climbing with ropes-course elements and zip lines—perfect for an adventurous family. Coloradoviaferrata.com

This article appeared in the July/August 2021 issue of Condé Nast Traveler. Subscribe to the magazine here.

Inside Tunisia's ghost hotels: The once lavish resorts deserted and abandoned after terror attacks on tourists

Experiencing the wonders of a South African safari